US drops charges against 11 of 15 of President Erdoğan's guards 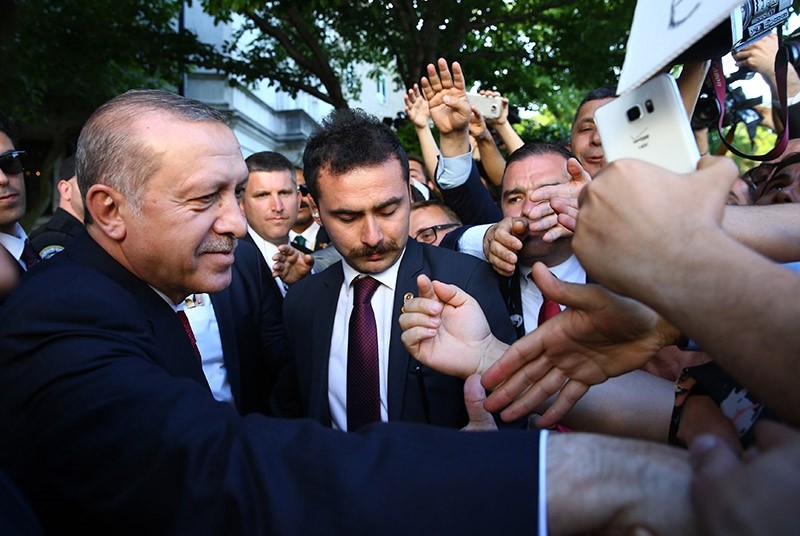 The United States has dropped charges against 11 of 15 guards of President Recep Tayyip Erdoğan who were indicted over a brawl with PKK supporters in Washington D.C. in May 2017, in a decision made public late Wednesday.

The decision to prosecute the guards had further strained bilateral ties at a time when the NATO allies are in sharp disagreement over policy in Syria. The dismissal of charges stands to ease tensions.

U.S. officials made it clear that prosecutors were not pressured by political motives to drop any of the charges. Rather, the decisions were made due to misidentification of some suspects and lack of adequate evidence against others, officials and an attorney in the case were cited by the Wall Street Journal as saying.

Tillerson, during private talks with Turkish officials before the dismissal of charges had been publicized, said the decision was an example of U.S. willingness to address Turkey's grievances, U.S. administration officials reportedly said.

The skirmish on May 16, 2017, caught on video, injured 11 people outside the Turkish ambassador's residence.

The charges against members of Erdoğan's security detail sparked outrage on Capitol Hill, even prompting some senators and lawmakers to issue objections.

Upon the indictment, the Turkish Foreign Ministry released a statement calling the decision "biased, unfounded and purely political," and reiterating that the incident was caused by the negligence of U.S. authorities.

The two countries previously exchanged diplomatic notes and summoned envoys over the issue.

On May 16, the first fight reportedly broke out at the Turkish embassy when PKK supporters threw water bottles at Turkish citizens, triggering a 10-to-15 second scuffle in the middle of the road. Only two police officers interceded in the fight and it was clear the police were not ready, as there were only around 10 police officers outside the embassy.

The prosecution case began to unravel last fall, as Washington police and the State Department failed to correctly identify all those involved in the case and to procure sufficient evidence.

Attorney Günay Evinch said the four men against whom charges were dropped in November were able to demonstrate that they had not been at the scene of the protest when the skirmish flared.

The U.S. attorney's office, which did not issue a press release upon dropping charges last month, said it is still assessing assault charges against four other members of the security team, and two Canadian citizens.

Two American citizens involved in the incident are awaiting their sentences after pleading guilty in December to assault charges.

Efforts to normalize relations between the two NATO allies have been complicated by conflicting policy choices, including prosecution of the guards and the U.S. President Donald Trump's decision to directly arm the terrorist PKK-linked People's Protection Units (YPG) in northern Syria, despite Turkey's repeated objections and ongoing Operation Olive Branch to clear the terrorists from the region.

Turkey and the U.S. have established a strategic dialogue mechanism to work through their differing policies in Syria, especially on the strategic northern city of Manbij, where the U.S. backs YPG terrorists.

Ankara had requested the U.S., beginning with former President Barack Obama, to withdraw the YPG from areas east of the Euphrates and Manbij, and to stop supporting the group militarily. The U.S. had promised to meet Turkey's demands, but has not so far, which has added to strained relations between the two countries.

Turkish Foreign Minister Mevlüt Çavuşoğlu was due to meet his counterpart Tillerson on March 19 to discuss a roadmap for Manbij, including the withdrawal of YPG and the return of weapons handed to the terrorists by the U.S. Despite the delay caused by Trump's sudden sacking of Tillerson, Turkish officials said they expect the U.S. to act in accordance with the common understanding reached by both sides.