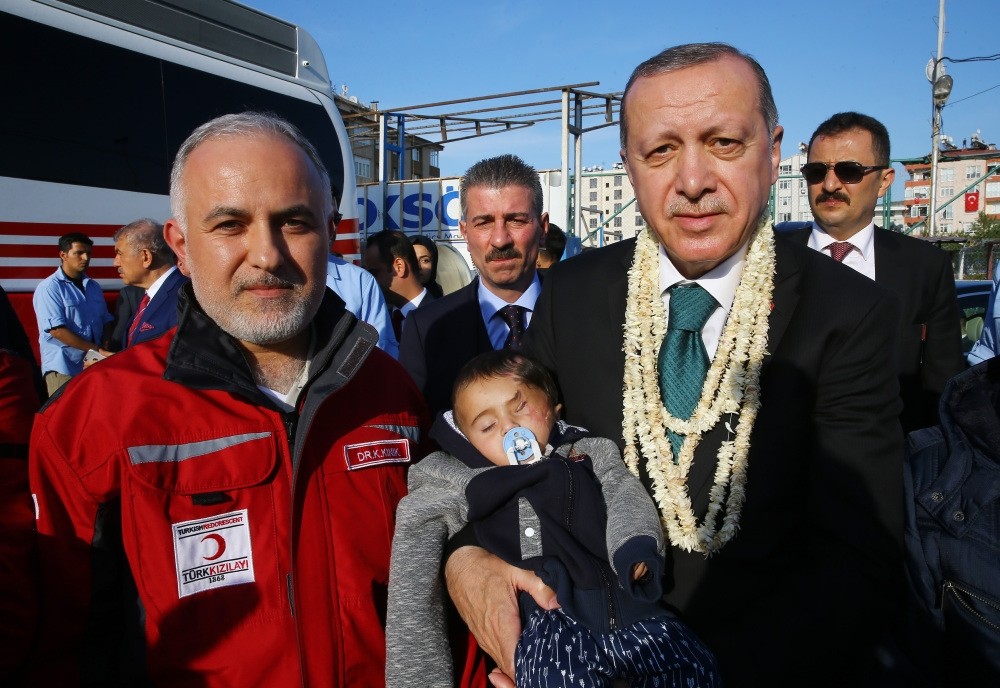 The father of an infant who came to symbolize the plight of Syrian civilians victimized by regime attacks in Eastern Ghouta revealed the miserable situation in the region. Karim Abdallah, known as "Baby Karim," along with his father and two sisters finally reached safety in southern Turkey's Hatay on Sunday along with his family.

Speaking to Anadolu Agency (AA), the father Ebu Muhammed wished for all of the Syrians troubles to come to an end.

He said that they have been struggling to survive for seven years in Eastern Ghouta and six months ago he lost his wife in a regime airstrike, which also wounded Baby Karim, who lost one of his eyes.

He further added that his daughter was killed 20 days ago in another airstrike and his son Mehmet has been lost ever since he was taken for treatment following the attack. "In addition to the treatment of my son Karim, I also wish for my son Mehmet to be found and brought back to me," Muhammed said.

He also thanked Turkey for what the country has done for them so far.

Karim and his family left Eastern Ghouta and came to Idlib as part of compulsory evacuations under a cease-fire agreement offered by Russia, although attacks on civilians there have continued unabated.

Following Idlib, Karim and his family entered Hatay, Turkey via the Cilvegözü border gate, according to AA correspondents on the ground.

Since Karim's story came into the spotlight, many people have expressed their support for the boy on social media.

Users shared photos of themselves, covering one of their eyes with the hashtag #SolidarityWithKarim.

At least 45,000 people have been evacuated from Eastern Ghouta since March 22.

Since Feb. 19, more than 1,400 people have been killed in attacks by the regime and its allies in Eastern Ghouta, according to local civil defense sources.Home to some 400,000 residents, the district has remained under a crippling regime siege for the last five years, which has prevented the delivery of badly needed humanitarian supplies.

Syrian regime forces attacked a foundation linked to Turkey's top religious body's temporary shelter in Idlib that was built for those who were evacuated from the blockade in Eastern Ghouta on Sunday.

According to Turkey's İhlas News Agency (İHA), Turkiye Diyanet Foundation (TDV), connected to the Religious Affairs Directorate or Diyanet, announced the airstrike on its social media account. "The temporary shelter of ours in Ariha district of Idlib which hosts more than a thousand families from Eastern Ghouta who were evacuated from the region is hit by regime aircraft," the foundation said on its Twitter account by attaching a video showing the incident to the tweet.

Last week, the foundation released a statement saying that it had helped to transport 2,000 families in a besieged Syrian enclave to temporary shelters in the city of Idlib. "Foundation teams distributed food and gave health checks to the people. Then our teams helped to transport 2,000 families to temporary shelters in Idlib, Syria. The TDV is on the ground to help needy people with 40 buses, two ambulances, and three humanitarian aid vehicles," said the statement. The foundation also provides clothing to needy families through its five charity stores in Syria. Since the start of the Syrian war, the foundation has sent aid worth almost TL 200 million (over $52 million).