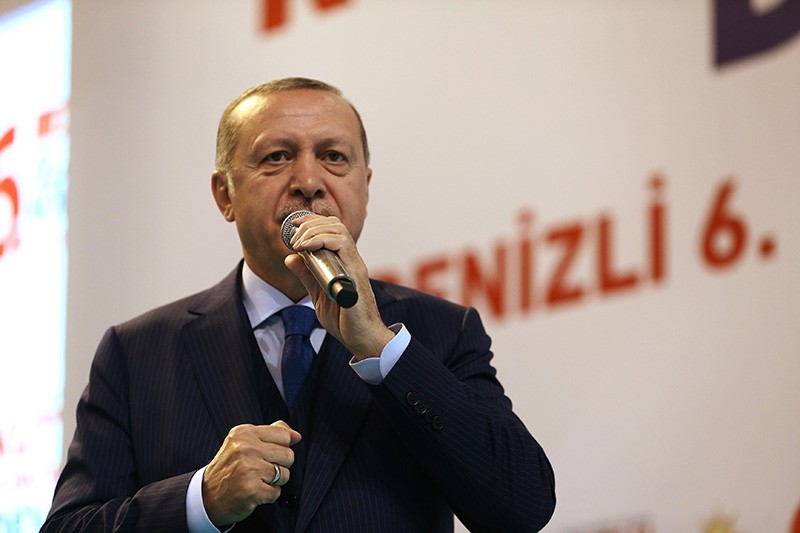 President Erdou011fan addresses a crowd at an AK Party convention in Denizli province (IHA Photo)
by Daily Sabah with Agencies Apr 07, 2018 12:00 am

"You will not be able to get rid of this terror scourge. Here, look, you see what terrorists are doing in Germany. It will happen in France too," Erdoğan told a crowd of supporters in Denizli, southwestern Turkey.

The president also noted that the YPG terrorists used cement from the French cement giant [Lafarge] to build underground hospitals and more.

The cement giant was under fire after it was revealed that it made payments to terrorist groups, including Daesh, and YPG to keep a plant running in war-torn Syria.

"You will sink as long as the West feeds these terrorists," Erdoğan was quoted as saying by the Anadolu Agency.

Turkey is upset by the controversial alliance and liberated Afrin, an enclave in northern Syria, from the YPG, who make up the backbone of the SDF.

He noted that the number of terrorists killed in Operation Olive Branch has reached 4,000.

France opposed the operation and called for an emergency U.N. Security Council meeting when Turkey announced its launch.

Afrin had been a major hideout for the YPG/PKK since July 2012 when the Assad regime in Syria left the city to the terror group without putting up a fight.