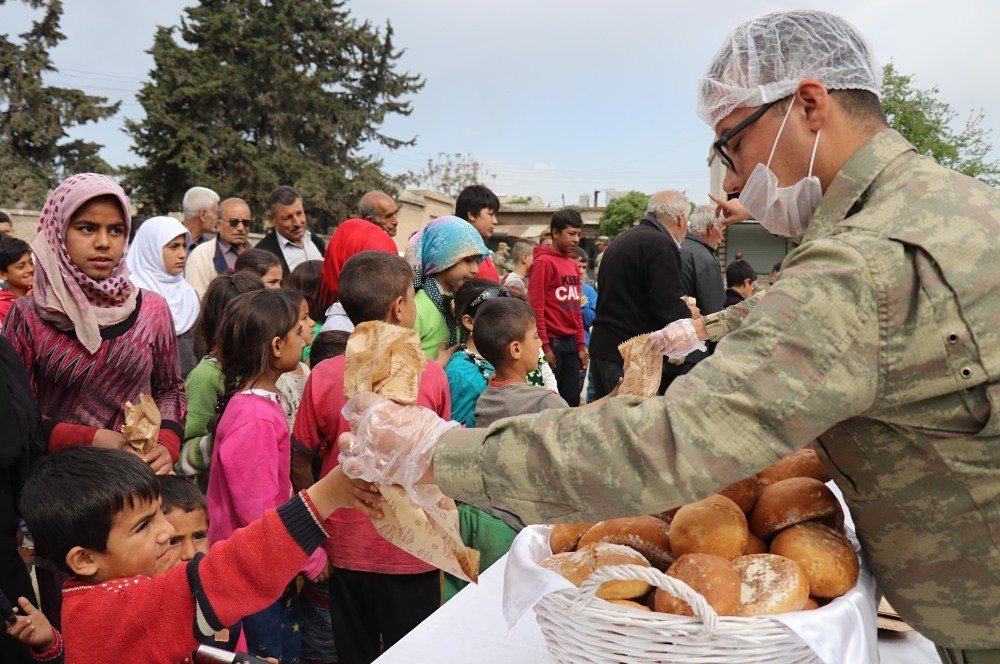 Turkish soldiers distribute bread to locals in Jinderes in Afrin from a mobile oven with the capacity to produce 6,000 loaves of bread a day, April 9.
by Anadolu Agency Apr 10, 2018 12:00 am

A mobile oven, set up by Turkish soldiers in the town of Jinderes, in northwestern Syria's Afrin, is baking thousands of loaves of bread for the locals every day.

The Turkish troops also distribute the bread among the locals in Afrin, which was recently purged of the PKK's Syrian affiliate, the People's Protection Units (YPG) in Operation Olive Branch.

The bakery on wheels can produce more than 6,000 loaves of bread every day.

Ahmed Mustafa, a local who came to collect bread, told Anadolu Agency (AA) that people in Jinderes were very happy after the Turkish soldiers arrived.

"Before their arrival. Everything was very expensive. We could not bring anything to our town due to a blockade. Everyone will go back to their work now. We hope life will get back to normal soon," he said.

On Jan. 20, Turkey launched Operation Olive Branch to eliminate the YPG/PKK and Daesh terrorists from Afrin.

More than 3,800 terrorists have been killed since the start of the operation, allowing many displaced residents to return home. Turkish nongovernmental organizations and state-run humanitarian agencies, including the Turkish Red Crescent, are distributing aid to the locals in Afrin.