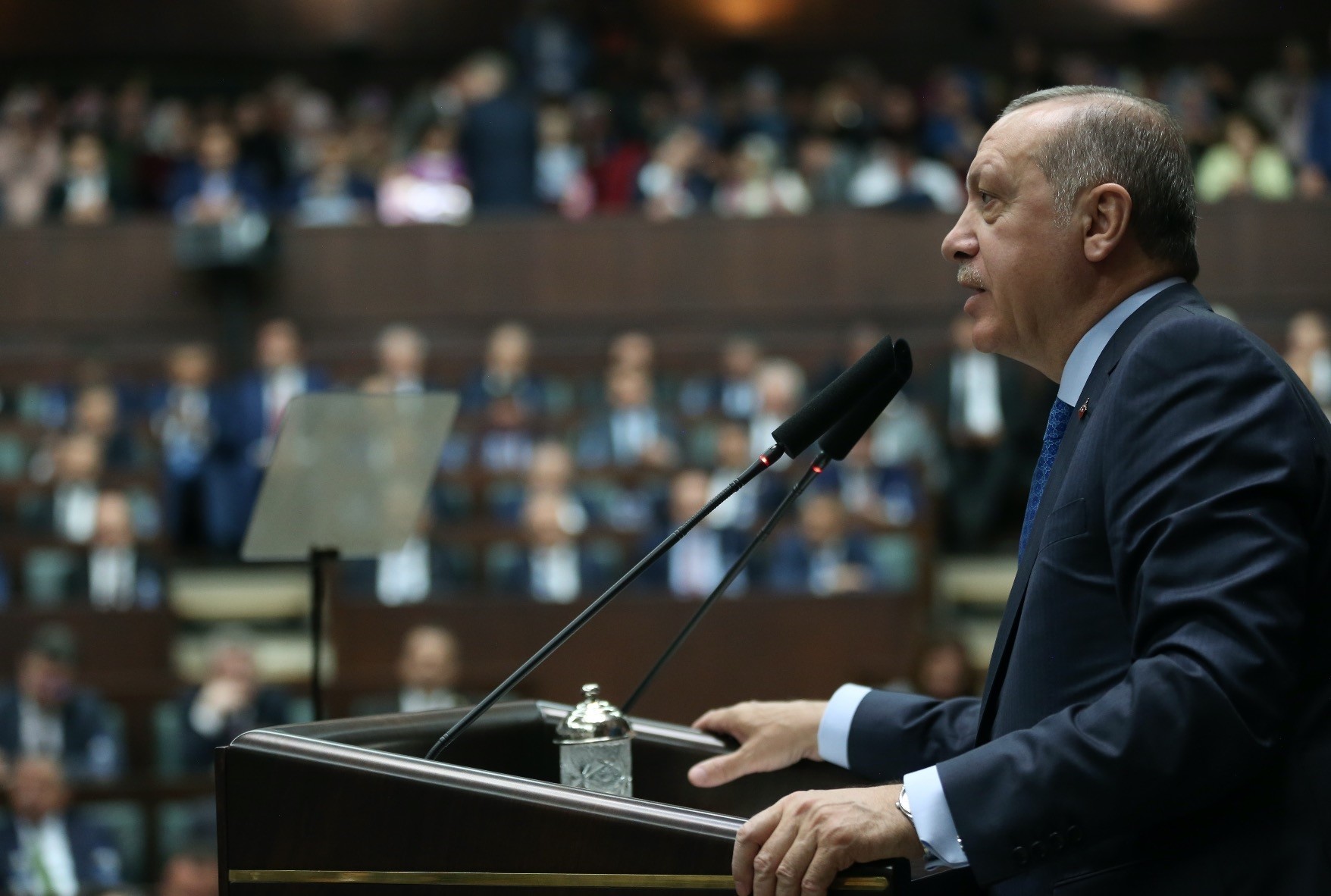 The administration of Afrin, recently cleared of YPG terrorists, will be given to the people of Afrin when the time comes, and Ankara will make the decision, Turkish officials have said

Turkish officials have said that Ankara is the ultimate decision maker when it comes to whom to hand over Afrin, which was recently liberated from the PKK terrorist group's Syrian affiliate People's Protection Units (YPG) in northwestern Syria. "Right now, we know very well to whom to hand over Afrin," President Recep Tayyip Erdoğan told reporters at Parliament after a Justice and Development Party (AK Party) weekly group meeting. Erdoğan was speaking in response to Russian Foreign Minister Sergei Lavrov, who said "the simplest way for normalization in Afrin" now that Operation Olive Branch, launched on Jan. 20 by Turkey and the Free Syrian Army (FSA), is complete, "is to return the territory of Afrin to the control of the Syrian government."

"First of all, the handing over of areas under control of other countries right now to Syria should be discussed. It will not convince us if it is said that the regime handed over those areas," Erdoğan said, referring to the areas held by the YPG, particularly in northern parts of the country. "We know very well to hand over Afrin to the people of Afrin when it is the right time. We are the ones who will decide when that time is, not Mr. Lavrov," Erdoğan added.

On March 18, Ankara announced that Afrin was cleared of YPG terrorists, but the operation still continues as the armed forces continue to clear mines and other explosives planted by the YPG before they fled villages in the rural parts of the region as well as the town center.

Turkey and Russia have recently exerted efforts to find a common denominator through diplomacy in establishing a peaceful solution to the Syrian war despite their conflicting positions. Turkey, Russia and Iran successfully implemented a cease-fire in some areas and de-escalation zones as guarantor states between the Bashar Assad regime and the moderate opposition. While Turkey has been backing the moderate opposition, Russia and Iran have been strong supporters of Assad, a position Ankara does not agree with.On April 4, the presidents of Turkey, Russia, and Iran announced at a summit that the aim of their trilateral effort is "to rebuild a Syria where peace will prevail."

The trio, working as part of the Astana peace process for Syria, met in Ankara, while the U.S., another actor in the conflict, was not included. "With the trilateral summit, our aim is to rebuild and revive a Syria in which peace will prevail," Erdoğan said at a joint press conference after the three leaders met for an hour-and-a-half at the Presidential Complex.

Defense Minister Nurettin Canikli yesterday in Ankara, and Deputy Prime Minister Bekir Bozdağ late Monday after a Cabinet meeting also criticized Lavrov's comments."There is a terrorist structure in northern Syria. We have to take measures until all these areas are cleared of terrorism and there are no threats to Turkey anymore. The same goes for Afrin, as well," Canikli said. The defense minister added that Afrin will be handed back "once a government that is representative of all parties in Syria is established."

After the civil war broke out in the country, most areas in northern Syria were taken by the YPG from the regime without any major military confrontation. In addition, the U.S.'s decision to provide military support to the YPG, which functions under the Syrian Democratic Forces (SDF), in the fight against Daesh, has strengthened the group. Ankara has argued that the strong presence of the YPG, a group that has links to the PKK, constitutes a national security threat and that its aim to establish an autonomous region bordering Turkey will not be tolerated. The YPG's ultimate aim is to establish an autonomous region in northern Syria by connecting the Democratic Union Party's (PYD) northwestern Afrin canton to the Kobani and Jazeera cantons in the northeast along northern Syria, which Ankara has termed a "terror corridor."

"Turkey is respectful to Syria's territorial integrity, political unity and sovereignty, and this operation's aim is to protect, not damage Syria's territorial integrity, against terrorist groups that have invaded Syria," Bozdağ said late Monday concerning Operation Olive Branch.Bozdağ added that Afrin's administration will be handed over to the people in Afrin, as Turkey did after Operation Euphrates Shield conducted against Daesh terrorists in northern Syria.Operation Euphrates Shield was launched jointly with the FSA in August 2016 against Daesh and ended in March 2017.

As a result, the Syrian towns of Jarablus, al-Bab, al-Rai and Dabiq were cleared of Daesh, enabling locals who had sought refuge in Turkey to safely return to their homes. After Daesh was driven from the area and explosives were removed from the region, Turkey rebuilt previously Daesh-held towns and life has returned to normal.A similar administrative approach is expected to be implemented in Afrin, as well, where demographic sensitivities will be taken into consideration in the governance of the province until a new government is established in Syria.

A local council of 30 members was established at the Afrin Liberation Congress, which convened in Turkey's southern city of Gaziantep with the participation of over 100 people. The congress, which was organized recently, decided to meet regularly and be monitored by nongovernmental organizations. It also decided to request the disarmament of the public and to form a security force that is not aligned with any party. The most important criterion that will help secure the future of Afrin is that anyone who has had affiliation with the YPG or PKK will not be allowed to take part in the administration of the province.