Turkey declares once and for all: Assad regime must go 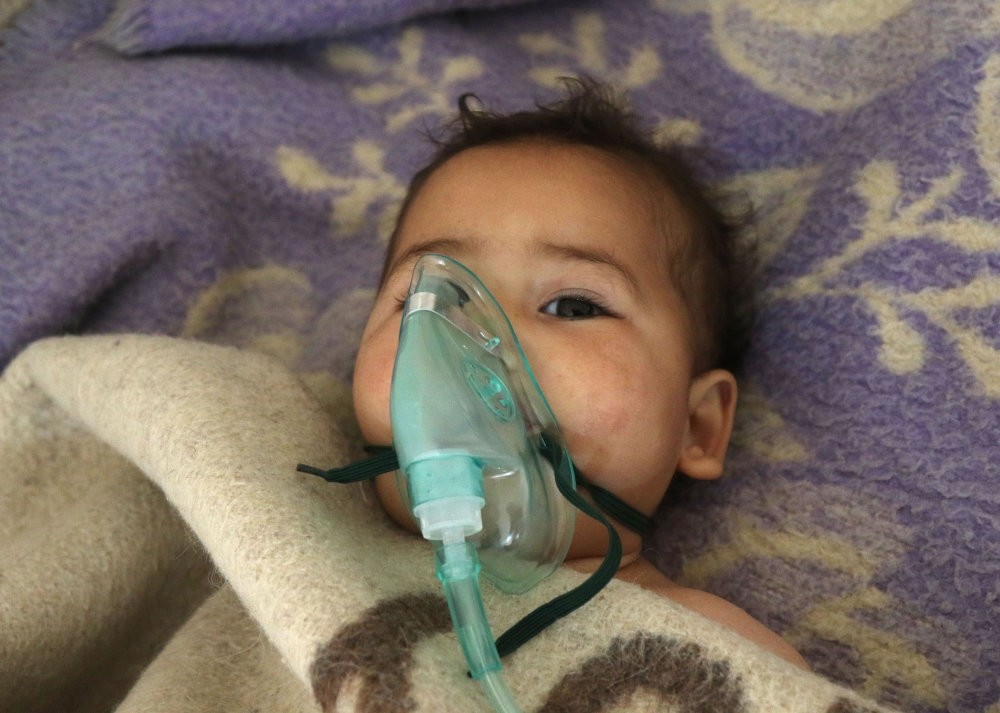 A Syrian child receives treatment at a small hospital in the town of Maaret al-Noman following a suspected chemical attack in Khan Sheikhun, a nearby rebel-held town in Syria's northwestern Idlib province, April 4, 2017.
by Daily Sabah Apr 12, 2018 12:00 am

The time has come for the Bashar Assad regime in Syria to go, Turkish officials said yesterday after the deadly chemical attacks by the regime in the Eastern Ghouta and Douma districts, and the U.S. vowing to strike regime targets in Syria. "The Assad regime must leave Syria. This is not the first time the Assad regime has used chemical weapons. It has killed nearly 1 million people with airstrikes and barrel bombs," Foreign Minister Mevlüt Çavuşoğlu said at an event organized by the Foundation for Political, Economic and Social Research (SETA) in Ankara.

On April 8, the White Helmets organization in Eastern Ghouta alleged that Syrian regime forces carried out a chemical attack on targets in the Damascus suburb's Douma district that left dozens of civilians dead. The United Nations Security Council (UNSC) unanimously adopted a resolution on Feb. 24, calling for a month-long cease-fire in Syria, especially in Eastern Ghouta, to allow the delivery of humanitarian aid. Despite the resolution, the regime and its allies early this month launched a major ground offensive backed by Russian air power to capture opposition-held parts of Eastern Ghouta. "[Assad] must leave the county and a transition to political process must began," Çavuşoğlu added.

He added that the attempts to establish a permanent solution, "such as the Astana and Sochi processes," must be put to work effectively, and the country must prepare for transparent elections in a very short time. "It is important to hold a transparent election under the U.N.'s roof. We do not want to see blood and tears in Syria anymore," Çavuşoğlu said.

Since the breakout of the Syrian civil war in 2011, the Turkish government has maintained that the ultimate solution to finding the peace in the war-torn country is to replace Bashar Assad and establish a new political environment that will be mediated by the United Nations and be an inclusive entity.

Turkish Defense Minister Nurettin Canikli also said that Assad's removal and clearing Syria of terror groups are two conditions that must be established for peace in Syria to prevail. "Clearing Syria of all terror groups and withdrawal of the regime. If these two parameters had been established by now, peace would have been established by now, and none of these [chemical attacks] would have happened," Canikli said in a televised interview yesterday.

Canikli said both Russia and the U.S. are on the wrong side in Syria. "One supports terror elements, supporting the PKK/PYD/YPG, and they act with them in Syria. And the other one supports the Assad regime, which is the reason behind the murders of hundreds of thousands of Syrians," he added.

Assad's removal was a non-negotiable condition for Turkey in planning Syria's future from the beginning of the conflict. However, U.S. support to the Syrian Democratic Forces (SDF), which is dominated by the PKK terrorist group's Syrian affiliate, the Democratic Union Party (PYD), and its armed wing, the People's Protection Units (YPG), made Turkish governments focus on elimination of the group from northern Syria. The growing influence of the YPG in northern Syria triggered the Turkish military to launch Operation Olive Branch on Jan. 20 in Syria's northwestern Afrin province. The Afrin operation, which was conducted by Turkish armed and air forces, as well as the Free Syrian Army, was also coordinated with Russia, the main backer of the Assad regime. While Russia provided heavy military support to Assad, his presence in leading the regime has been a matter of disagreement between Ankara and Moscow. Yet, Turkey and Russia, as well as Moscow, have been able to find a common ground in establishing ceasefire and de-escalation zones in parts of Syria, through several meetings the leaders held in what has been known as the Astana agreement and Sochi talks.

'Turkey to remain in Afrin as

Defense Minister Canikli also responded to Russian Foreign Minister Sergei Lavrov's comments, suggesting to return Afrin to regime control, saying that Turkey is in Afrin to eliminate terror threats posed to its national security. "As long as the risk and threats continue, we have to remain in Afrin. We must do this for the security of our country," Canikli said.

Foreign Minister Çavuşoğlu said that Turkey was coordinating with Russia during the Olive Branch operation's first phase, which was clearing the terrorists. "The second phase of operation is to ensure the safe returns of locals and bringing stability. We have no interest in Syrian soil," Çavuşoğlu added.

The foreign minister underlined that due to the ambiguous relations between the regime and the YPG, returning Afrin to the Assad regime is not an option.

"One day the regime fights with the YPG, the next day they get along. There are many strange things happening on the field in Syria. Groups fighting each other today, can be selling weapons to each other tomorrow," Çavuşoğlu said.

Turkey sees the presence of the YPG in northern Syria as a terror threat to its national security, as the YPG is organically linked to the PKK, a group that has been listed as a terror organization by the U.S., the EU and Turkey. Ankara has also vowed to eliminate the YPG from northern Syria's Manbij and eastern parts of the Euphrates River, currently under the control of the U.S.-backed group.

Foreign Minister Çavuşoğlu also said that he would hold a meeting with his French counterpart Jean-Yves Le Drian over President Emmanuel Macron's offer to mediate talks with the SDF, on request of the French side.

He said the two ministers had originally planned to meet earlier but couldn't because of their busy schedules.

The meeting comes after a diplomatic crisis erupted over France's offer to mediate between Turkey and the U.S.-backed SDF, which is dominated by the YPG.

President Macron's meeting offer with the SDF was branded as "unacceptable" by Turkey with Çavuşoğlu saying it showed France's "double standard" on terrorist groups and calling on Paris to take a clear stance against all of forms of terror.