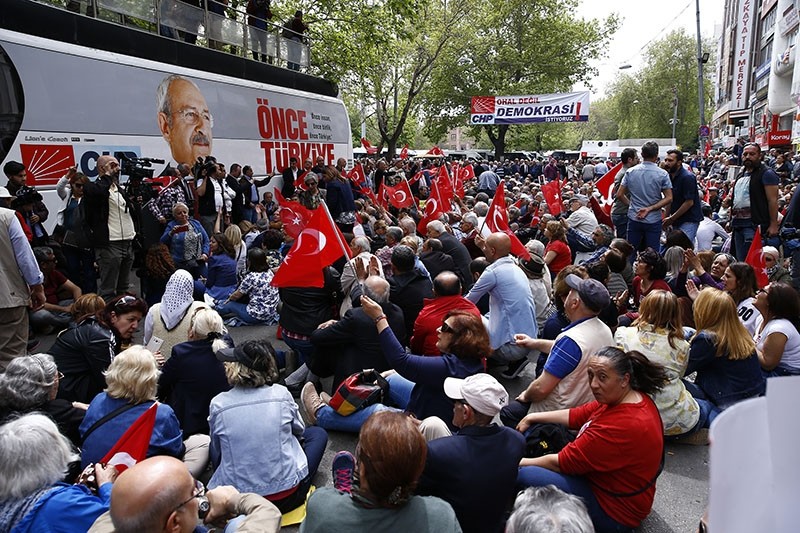 The main opposition Republican People's Party (CHP) held sit-in protests Monday in all 81 provinces of Turkey to protest the ongoing state of emergency ahead of its planned extension this week.

The National Security Council (MGK) and the Cabinet will convene on Tuesday and are expected to propose an extension of the state of emergency, which was introduced on July 20, 2016, in the aftermath of the July 15, 2016, coup attempt by the Gülenist Terror Group (FETÖ). On Wednesday, the motion to extend the state of emergency will be put to vote in the parliament, expected to be extended for the seventh time with the support of the ruling Justice and Development Party (AK Party) and Nationalist Movement Party (MHP).

The protests organized by the center-left CHP under the theme of "We want democracy, not state of emergency," was open to all political parties and NGOs. A joint statement read in all protest sites said that the emergency rule has moved away from its purpose of declaration, which was to combat terrorism and clear FETÖ-linked figures from government agencies, and has been eroding democracy and the rule of law. "The state of emergency has become a tool to suppress human rights, freedom of expression and all kinds of protests," the statement said.

The CHP-led protest in Diyarbakır was backed by the provincial organization of the pro-PKK Peoples' Democratic Party (HDP), which also opposes the state of emergency.

Regarding the protests, Deputy Prime Minister and Government Spokesperson Bekir Bozdağ said in order for the CHP to be more successful than the AK Party, it should start working, or running, instead of sitting down.

"For a long time, the CHP is using the methods of terrorist groups instead of a political party's methods," he said Monday, speaking to reporters during his visit to Qatar.

The protests come on the anniversary of a referendum on a switch to the presidential system and other constitutional reforms backed by the AK Party and the MHP, which were narrowly adopted with 51.4 percent of the votes.

More than 50,000 people with links to the FETÖ are jailed under the state of emergency decrees, and judicial processes are ongoing.

The number of public personnel dismissed through statutory decrees is 107,174, Bozdağ had told Parliament's Interior Commission in January.

The decrees cannot be appealed in courts until the state of emergency is terminated, and the parliament adopts the decrees as laws.

The opposition says that the prolonged nature of the state of emergency causes a number of issues irrelevant with security or terrorism to be included into the scope of statutory decrees, such as the privatization of sugar factories, which is currently ongoing.

The protests ended without any clashes with police.

The deadly coup attempt by FETÖ killed 250 people and left 2,200 injured. FETÖ leader Fetullah Gülen, living in self-imposed exile in the United States, has been striving to infiltrate into the state for decades with the aim of taking control of state institutions.