Third hospital to open in liberated areas in northern Syria 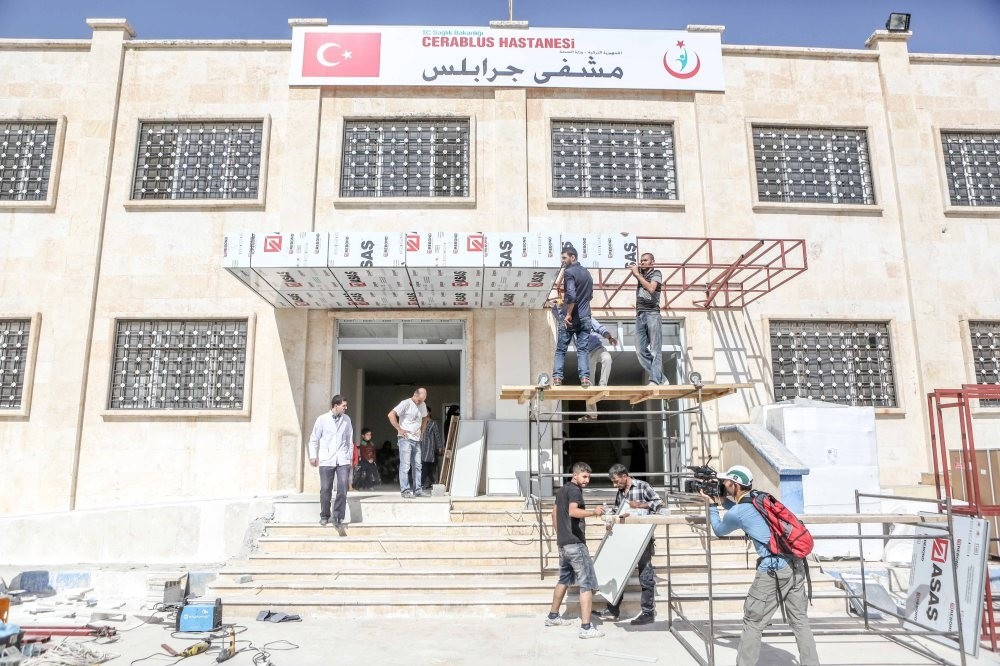 The hospital in Jarablus that Turkey built after the town was liberated in Operation Euphrates Shield.
by Safure Cantürk Apr 17, 2018 12:00 am

As a part of the normalization process in the areas liberated in Turkey's Operations Euphrates Shield and Olive Branch, a third hospital will officially open in a ceremony next week al-Bab

The third hospital in areas liberated from Daesh and the PKK terrorist group-affiliated People's Protection Units (YPG) in northern Syria will open next week in al-Bab as efforts to normalize life continue at full steam.

The inauguration ceremony will take place next week for the 500-bed hospital in al-Bab, which will be the largest medical institution in the area. "There will be seven operating rooms, four delivery rooms, 38 intensive care beds, 55 outpatient clinic beds and 27 emergency beds," Undersecretary of Health Ministry Eyüp Gümüş told the Turkish Sabah daily yesterday.

The hospitals, which are run by the Turkish Health Ministry, are equipped with all the necessary equipment in case of an armed conflict. Gümüş said that there will be no need to transfer patients between hospitals except for complicated diseases after the new hospital goes into service.

Turkey's first hospital opened in Jarablus in September 2016, after the town was liberated with the cross-border Operation Euphrates Shield. At the end of last year, the hospital added emergency room service and was expanded to 400 beds. Along with the two hospitals in al-Bab and Jarablus, another one also put into service in Afrin, which was liberated from the YPG on March 18 with Operation Olive Branch. The hospital had previously treated YPG terrorists, but after the liberation, explosives and mines were cleared and doctors and healthcare personnel were employed in the hospital.

Ankara launched Operation Euphrates Shield along with Free Syria Army (FSA) factions on Aug. 24 to secure Turkey's southern border. The operation was completed in late March, and more than 2,000 square kilometers of northern Syria was liberated from Daesh, including Jarablus, al-Rai and al-Bab. Since then, Turkey geared up efforts to normalize life and create a war-free environment in the liberated areas to make refugees return with infrastructure, healthcare, security and education projects. With noticeable improvement in the socio-economic condition, al-Bab's population more than doubled in a year.

Besides for health services, there has been also a rapid recovery in terms of infrastructure, security and social life in northern Syria, in the areas liberated by the Turkish and FSA forces. An administration was established with the participation of local people in the areas cleared of Daesh, including al-Rai, Jarablus, al-Bab and Azaz, through Operation Euphrates Shield, which was launched Aug. 2016 against Daesh and ended in March 2017. Moreover, local councils were established to administer the normalization process after the eviction of Daesh; regular security forces were formed, and these local councils managed projects on education, infrastructure and the economy.

Jarablus was more or less a ghost town with only around 2,000 inhabitants under Daesh rule, but after Operation Euphrates Shield, its population grew again amid a rebuilding process that Turkey actively supported. Thousands who took shelter in Turkey during the war returned. Both Ankara and nongovernmental organizations are also pursuing efforts to build new housing to accommodate the returning population. Schools in the town were also rebuilt and restored with Turkish assistance.