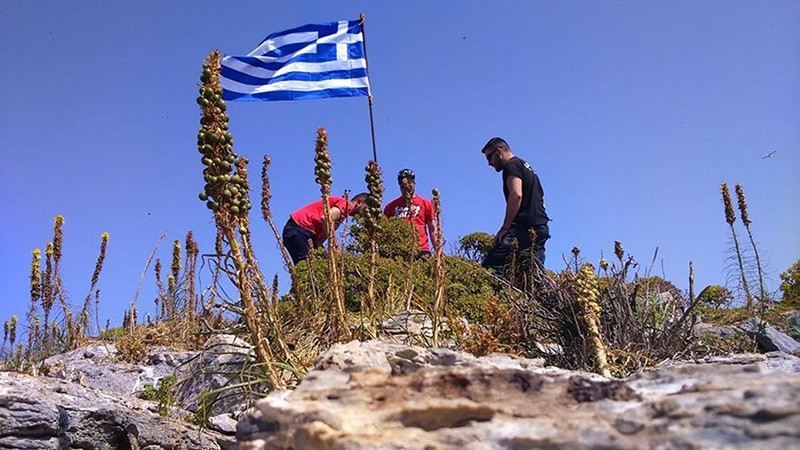 Unidentified individuals hoisting a Greek flag on an islet off Turkey's Didim coast (Sabah Photo)
by daily sabah Apr 18, 2018 12:00 am

Greek Defense Minister Panos Kammenos criticized individuals who attempted to plant a Greek flag on an islet in the Aegean Sea off Turkey's Didim coast.

"If someone takes a flag and hoists it somewhere, that person should guarantee that he or she will defend the flag with their blood until the end," the minister told the Greek parliament.

Kammenos also highlighted that the flag is a strong symbol of national sovereignty and lays special responsibility for the person hoisting it.

On Monday, Prime Minister Binali Yıldırım announced that there had been an attempt to hoist a Greek flag on an uninhabited islet off Turkey's Didim coast. He noted that Turkish Coast Guard units intervened and the attempt was thwarted.

Turkish officials criticized Greece for creating tensions and reiterated that Turkey will take action against provocations.

In contrast, citing international law, Greece wants to increase its territorial waters to 12 nautical miles, which would leave practically the whole Aegean Sea under Greek control. Through a parliamentary motion in 1995, Turkey declared unilateral action by arguing that, if Greece were to extend the boundary to 12 nautical miles it would be considered a casus belli.