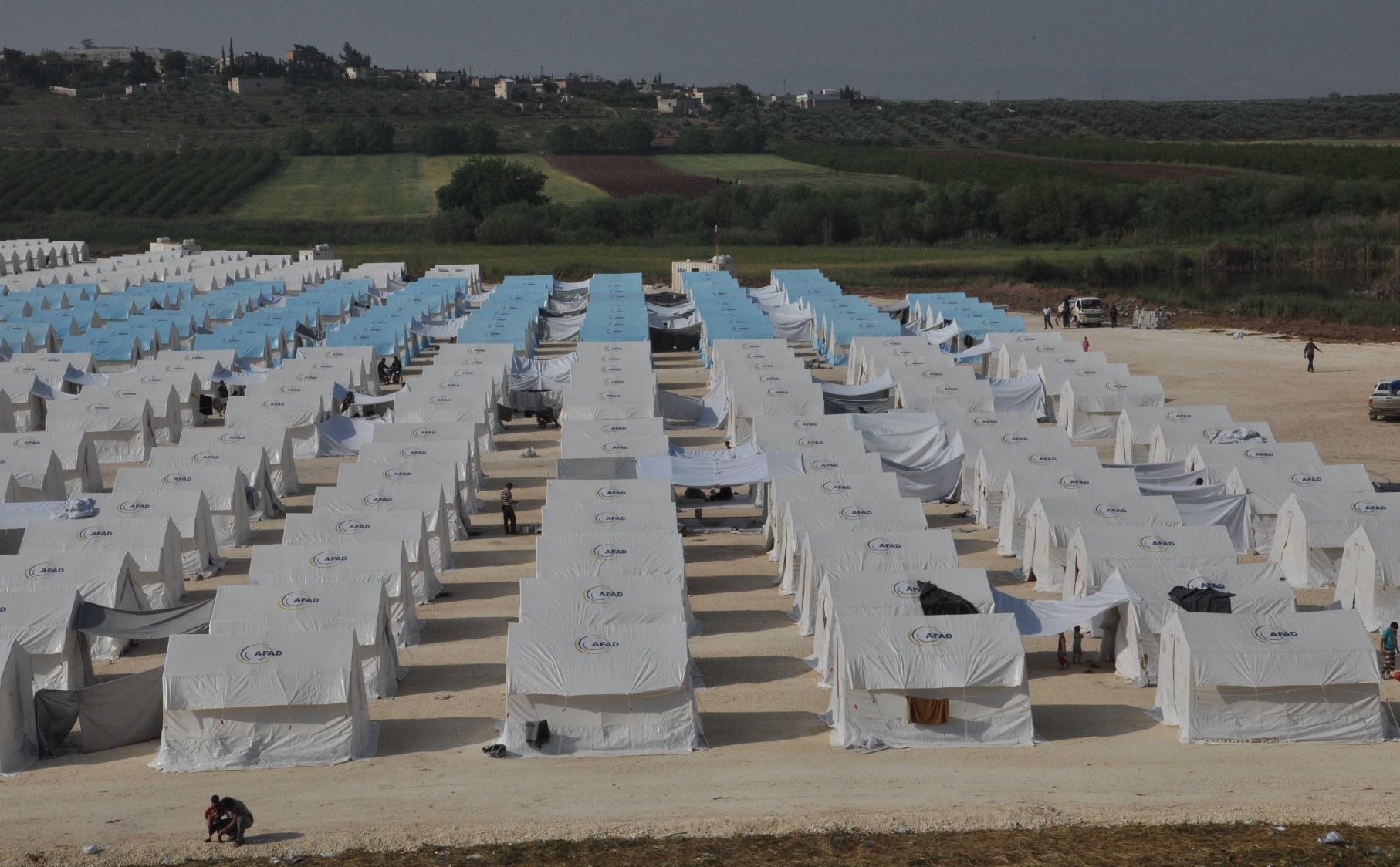 A refugee camp built by Turkeyu2019s Disaster and Emergency Management Authority (AFAD) in Afrinu2019s Muhammadiyah village.
by Daily Sabah with AA May 02, 2018 12:00 am

In northwestern Syria's Afrin, Turkish aid agencies have set up 200 shelters for refugees from eastern Ghouta. Here they will be provided with food and medical services

The Turkish Disaster and Emergency Management Authority (AFAD), Red Crescent (Kızılay) and another Turkish aid group have set up 200 tent shelters in the countryside of Afrin, northwestern Syria, said AFAD's head on Monday. Mehmet Güllüoğlu told Anadolu Agency (AA) that AFAD, in cooperation with the Turkish Red Crescent and Nil Education and Aid Association, set up the tents for refugees from Eastern Ghouta, a city besieged for years by the Bashar Assad regime.

Güllüoğlu said that there are nearly 650 families temporarily living around Afrin's Muhammediyye district, adding that over 20,000 refugees from Eastern Ghouta have been evacuated since March to areas liberated by Turkey's Operation Euphrates Shield. Nearly 1,080,000 Syrians are currently living in the Euphrates Shield area, and 193,723 of them are in camps, Mehmet Güllüoğlu had said in April. Turkey launched Operation Euphrates Shield on Aug. 24, 2016, to clear Daesh terrorists from the northern Syrian towns of Jarablous, al-Rai, Dabiq and al-Bab. The operation had ended in March 2017, with about a 2,000 kilometer-square area cleared from the terrorists.

Home to some 400,000 residents, Eastern Ghouta has remained under a crippling regime siege for the last five years, which has prevented the delivery of much-needed humanitarian supplies.

"We are working to return Afrin residents to Afrin, Azaz to Azaz, and Al-Bab to Al-Bab, but since the war is ongoing, going back is difficult, we're doing our best," he said. Güllüoğlu also said that despite the efforts and hard work to reach out to those in need, women, the elderly and children's situations are particularly severe.

Previously held by the PKK terrorist organization's Syrian affiliate, the People's Protection Units (YPG), Afrin was recently liberated by Turkish military and the Free Syrian Army (FSA) in Operation Olive Branch. The operation was launched on Jan. 20 and ended on March 18. Since then, efforts have been exerted to bring life back to normal in the province, from clearing the planted explosives by the terrorists to rebuilding the infrastructure in the province.

The aid groups also distributed 5 tons of fruits and vegetables with over 1,000 packets of chocolates and 710 packets of biscuits and cakes to orphans living in the area.

On Feb. 24, the United Nations Security Council (UNSC) unanimously adopted Resolution 2401, which called for a cease-fire in Syria, especially in Eastern Ghouta, to allow the delivery of humanitarian aid.

Despite the resolution, however, the regime and its allies in early March launched a major ground offensive, backed by Russian forces, aimed at capturing opposition-held parts of the district.

Since Feb. 19, nearly 1,500 people have been killed in attacks by the regime and its allies in Eastern Ghouta, according to local civil defense sources.

AFAD and the Red Crescent had previously set up camp for 3,000 people around the Turkey-Syria border for people fleeing airstrikes in the eastern and southern countryside of Idlib by Assad regime forces.