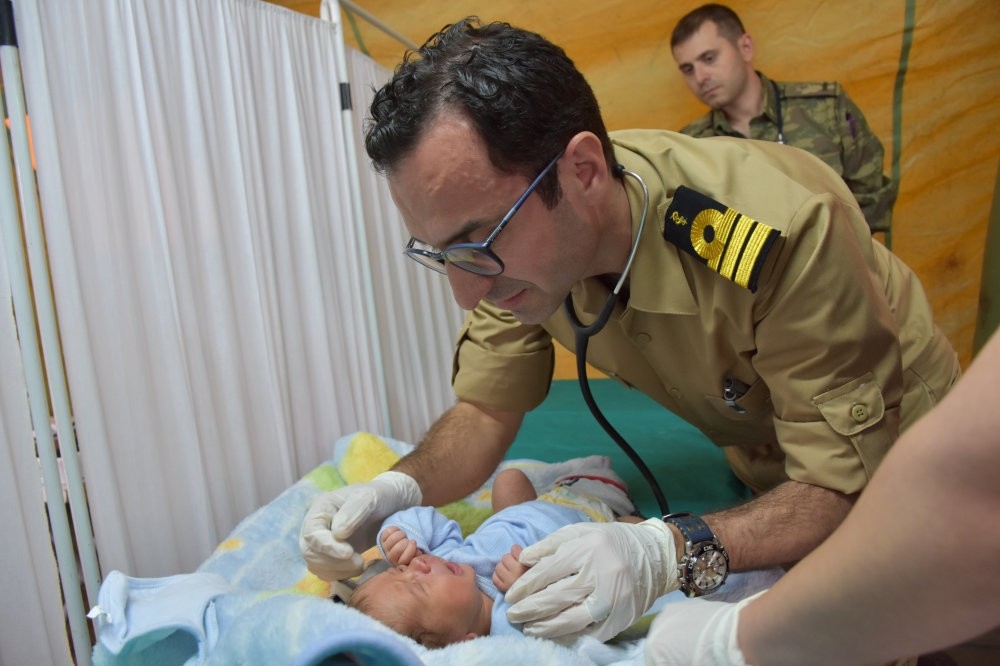 More than 2,000 people have been treated at the hospital Turkey built in Jinderes, in northwestern Syria's Afrin province

Hundreds of children and thousands of adults have received treatment in Syria's Afrin at a hospital built by Turkey.

According to information provided by the Turkish Armed Forces (TSK), more than 2,000 people have been provided with health care, including 634 children, at Emergency Hospital built in the Jinderes area of Afrin on April 21.

Soldiers with medical backgrounds have been examining the patients and providing medicine. If the patient is extremely sick or suffers from a chronic disease, he or she is sent to Turkey for treatment by ambulance.

One of the health centers in Jinderes district's rural area treats 60 to 70 patients a day. Emergency Hospital was built by the Turkish army since hospitals in central Afrin have been partly or completely destroyed.

Life in Afrin, which was liberated from the PKK's Syrian affiliate the People's Protection Units (YPG) by the TSK on March 18, has gradually returned to normal over the course of the last two months.

The operation aimed to establish security and stability along Turkey's borders and the region as well as to protect Syrians from the oppression and cruelty of the YPG terrorists.

Indeed, life conditions in the town have significantly shifted in a positive direction following the liberation. In line with the changes, a town council consisting of locals has been established.

The city's opinion leaders have voted and formed a temporary local council in the center of Afrin. The interim council was formed to help provide local services and has a total of 20 members. Out of the 20 members, 11 are Kurdish and eight are Arabs, while one member represents Turkmens.

Turkey plans to give Afrin back to the people following years of oppression and misery. First, a law enforcement body will be set up in the densest areas of the city.

Most law enforcement officers will be Kurdish in the city as Turkey has placed great emphasis on the ethnic composition of Afrin. Turkey is expected to implement a system in Afrin similar to those in Jarablus and al-Bab, which were liberated from Daesh during Operation Euphrates Shield.

Afrin had been a major hideout for the YPG since July 2012, when the Bashar Assad regime in Syria left the city to the terror group without a fight. Thanks to the developments in the town, the Turkish government expects Syrians to return home.

Since the beginning of Operation Olive Branch, Ankara has been asserting that its purpose is to eliminate threats of terrorism directed at Turkey and pave the way for the return of displaced people.

Atay Uslu, the Justice and Development Party's (AK Party) Antalya deputy and the head of Parliament's committee on migration, previously said they expect the return of approximately 300,000 Syrians to Afrin.

Security in Afrin has been taken under full control as well. Turkish troops and the Free Syrian Army (FSA) have set up checkpoints to protect local civilians and prevent terrorists from returning to the region.