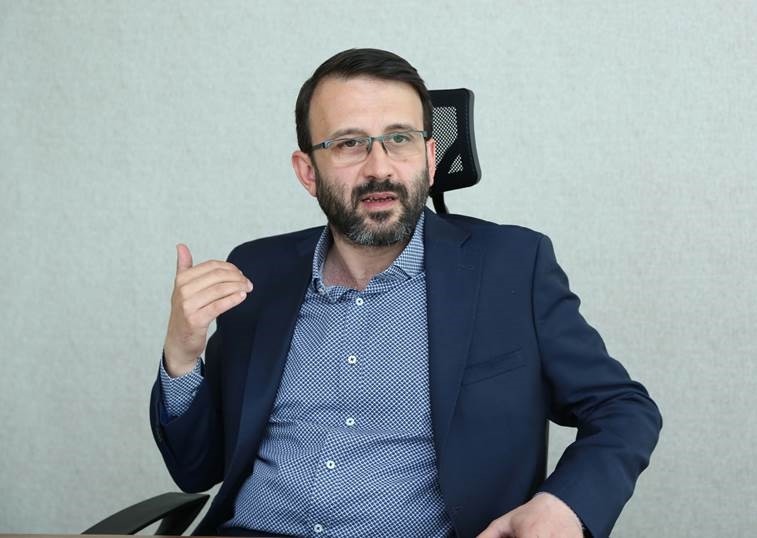 The director of the ORC polling center told Daily Sabah that President Erdoğan is likely to win the upcoming presidential election in the first round with nearly 60 percent of votes, adding that the main problem for opposition parties is their inability to offer a good scenario for a post-Erdoğan era

Turkey will go to the ballot box on June 24. For the first time, voters will simultaneously vote in both the presidential and parliamentary elections. Having the highest electoral participation rate with 85 percent, what kind of a political outcome awaits Turkey? What are the latest figures regarding the political parties and their presidential candidates? What is the latest on voter trends? How will alliances formed between parties affect the outcome of elections? Daily Sabah asked these questions to Objective Research Center (ORC) Research Director Mehmet Murat Pösteki. 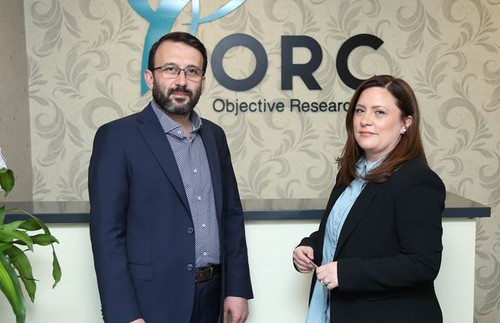 Daily Sabah: Drawing a comparison between poll results before and after the announcement of snap elections, what is your forecast regarding both the presidential and parliamentary elections?

According to our research prior to the announcement, the People's Alliance constituted by the Justice and Development Party (AK Party) and the Nationalist Movement Party (MHP) had a share of 56.2 percent. As the remaining political parties weren't in an alliance, we had asked questions in particular about parties. The Peoples' Democratic Party (HDP) and the Good Party (İP) were below the 10 percent electoral threshold. Meanwhile, the Republican People's Party (CHP) had its usual share around 25-26 percent. Regarding the presidential elections, we asked the participants to compare President Recep Tayyip Erdoğan with the other presidential candidates. The lowest prediction of Erdoğan's share was around 45 percent against the İP's Meral Akşener, who was yet to form an alliance with several other parties. On the other hand, Erdoğan's highest estimation was against former President Abdullah Gül. Numerically, Erdoğan's votes weren't increasing: However, if Abdullah Gül was designated as the opposition's candidate, the electoral participation rate would decrease as those who oppose Erdoğan's presidency would simply not go to the ballot box. This automatically increased Erdoğan's predicted share. To be specific, one third of CHP voters were saying that they wouldn't cast their votes if Gül were to be the candidate. This would reflect as a 7-8 percent drop in the electoral participation rate.

DS: The CHP agreed on Muharrem İnce as their presidential candidate. What does your latest poll research reveal about the opposition parties and their candidates?

MMP: It was being discussed that the CHP would designate a presidential candidate who could sway voters from the AK Party or could channel nationalist voters to Meral Akşener. The expectation was to carry the presidential election to the second round and pit Akşener against Erdoğan. However, after İnce's declaration as the CHP candidate, Akşener is now fourth in the presidential race. On the other hand, HDP's Selahattin Demirtaş is third in this race; per the secret alliance formed between the CHP and the HDP prior to the June 7, 2015 elections, a group of CHP voters supported the HDP. While this group will probably vote for the CHP in the parliamentary elections, it's obvious that they might be inclined to vote for Demirtaş in the presidential elections. If CHP voters support Demirtaş to an extent that surpasses our predictions, Demirtaş might even come second in the presidential elections. All of these are obviously speculations. Realistically speaking, İnce is Erdoğan's main opponent; this is because İnce possibly has the highest share of votes after Erdoğan, despite having a substantially lower share than Erdoğan.

Those stating that they will be voting for the İP are mostly former CHP supporters. There is also a voter base that supports the MHP, but doesn't vote for the party, as they dislike Chairman Devlet Bahçeli's administration. They are inclined to vote for the İP and Akşener. On the other hand, there isn't any significant voter shift to the İP, the CHP or the Felicity Party among the AK Party voter base. There could've been a small shift towards the Felicity Party (SP); however, this isn't very possible any longer, especially with the Grand Unity Party's (BBP) incorporation into the People's Alliance. In terms of votes, the SP and the BBP have similar potentials. Meanwhile, there are groups of nationalists who wanted to see the MHP and the BBP together and didn't vote. Now, the alliance between the MHP, the BBP and the AK Party might create a distinct synergy.

DS: According to your research, what is President Erdoğan's estimated share of votes in the presidential race?

AK Party voters won't vote for any other candidate than Erdoğan. They might prefer to just not vote at all. The AK Party's share dropped in the June 7 elections not because its voters voted for another party, but they simply didn't vote. AK Party voters not going to the ballot box in the June 24 elections will directly affect President Erdoğan's votes. 'Let me just vote for Erdoğan, but not the AK Party' isn't the mindset of AK Party voters. For this reason, we're unable to make a rather sound estimation. Nevertheless, I believe the AK Party won't have any issues in the presidential elections. Meanwhile, the parliamentary elections will be determined by the candidate lists parties prepare and the efforts of alliances.

DS: What will affect the opposition parties' performances in the parliamentary elections?

If the CHP, the HDP, the İP and the SP had formed an alliance, they would have done more in terms of securing the majority in Parliament. According to our current research, the HDP will have a hard time surpassing the electoral threshold. The HDP remonstrates because it's left out of the opposition; actually, the opposition is avoiding the HDP like the plague. The HDP not being able to surpass the electoral threshold will benefit the People's Alliance. In this case, the AK Party and the People's Alliance will secure seats allotted to the region. On the other hand, the opposition's alliance isn't without problems and these problems are caused by the SP.

The SP believes that the synergy created in the opposition is their doing, wants to form a group in Parliament and wants the CHP and the İP to accept its appointed candidates as is. However, regardless of the outcomes of the elections, 65 percent of the public states they won't vote for the CHP, while 60 percent of the public also states they won't vote for any organization that has the CHP in it. These are beneficial for the People's Alliance and harmful for the opposition. If the HDP doesn't join the opposition's alliance, it won't be able to secure any seats in Parliament. On the other hand, if the HDP joins this alliance, the İP won't be a part of the alliance, which will lead to the İP being unable to surpass the electoral threshold. Yet, this situation would benefit the CHP rather than the AK Party as CHP votes allow the Good Party to surpass the threshold. The HDP not being able to secure any seats will benefit the AK Party, however.

DS: What are the latest figures regarding the opposition's presidential candidates?

The research results indicate that Meral Akşener's presidential bid is disproportionally inflated. Akşener's alleged vote share doesn't reflect the reality. Akşener and the İP never surpassed 7 percent in our research. Akşener might secure a couple of points more than the İP; however, the votes she would be able to secure were from the CHP's nationalist voters. These voters will now support İnce instead of Akşener with the announcement of İnce's presidential candidacy. Besides the Kurdish electorate who oppose the candidacy of the nationalist İnce, I don't believe anyone will switch their support to the İP. For this reason, Akşener will end up fourth in the presidential race. When the candidates start their campaign, İnce and Akşener will start to clash because both of them believe they will end up second in the presidential elections and that they will be in the second round of elections. There is research conducted by other pollsters that inflates the vote share of these candidates by 10 percent.

This is why Kılıçdaroğlu appointed İnce as the CHP's presidential candidate. Meanwhile, as these parties have formed an alliance, the results will be more or less the same: if CHP voters shift towards the İP, Akşener will come second; if not, İnce will. Akşener will attempt to sway CHP voters despite being in an alliance with the CHP. This will lead to a clash between the two parties. The SP's presidential candidate, Temel Karamollaoğlu, won't be able to surpass 2 percent. The SP has a potential of 1 percent, another 1 percent may come from the AK Party. The AK Party has already compensated this potential loss with the BBP's inclusion in the People's Alliance. The greatest risk for the opposition's alliance is the infighting; this might lead to the HDP's Selahattin Demirtaş securing second place in the presidential race. If İnce fails to prevent this shift in votes, his vote share will drop to 15 percent. As Akşener's vote share is already below this figure, Demirtaş may secure 17-18 percent of the votes.

DS: There will be both parliamentary and presidential elections on June 24. The general opinion is that Erdoğan will win a secure presidency in the first round of elections. What does your research say about this?

There is always a risk, but I don't believe this will be the case for the presidential election. Erdoğan securing more than 55 percent of the votes will both strengthen his hand and release pressure in the country. However, if he wins narrowly, for instance with 51 percent, it will cause certain circles in Turkey to accuse the government of electoral fraud as it was the case after the June 7 elections. Erdoğan and the AK Party shouldn't allow such discourses to emerge. A good candidate list for the parliamentary elections would allow the AK Party and Erdoğan to secure a higher share of the vote. Otherwise, there aren't any risks involved for Erdoğan.