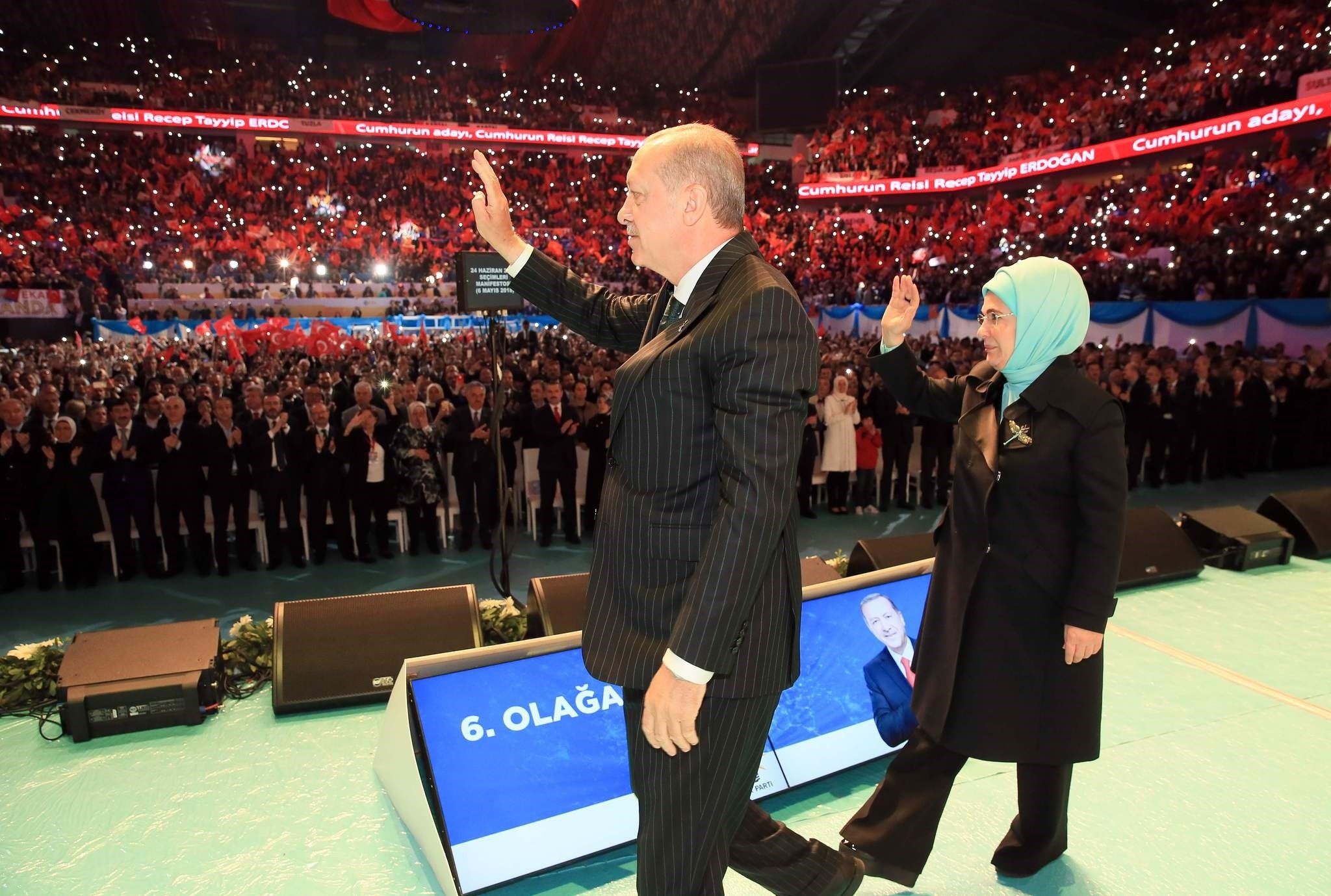 President Recep Tayyip Erdogu0306an and First Lady Emine Erdogu0306an wave to supporters prior to his speech revealing his ruling partyu2019s manifesto ahead of snap elections, in Istanbul, May 6.
by Özgenur Sevinç May 08, 2018 12:00 am

A decade-and-a-half of experience in office has inspired public trust and confidence in the ruling AK Party’s promises, experts say

The Justice and Development Party's (AK Party) 16 years of rule has built confidence for putting its new manifesto into practice experts say, highlighting the remarks on more democracy and freedom would be perceived as realistic and positive due to party's past experience. President Recep Tayyip Erdoğan announced his party's manifesto in a provincial congress in Istanbul on Sunday for the upcoming elections which will be held on June 24. Underlining that the elections will be a milestone for Turkey's future, Erdoğan said his party would continue to struggle to make Turkey an important global power and a leading force in the region.

"Thanks to its past performance, the voters would find the AK Party's promises in its manifesto reliable," İbrahim Uslu, the president of the ANAR Research Company said while he added that the big promises from parties which have not taken concrete steps in the past would fail to appeal to voters. During their terms in office, AK Party governments have focused on enhancing freedoms and liberties in the country. In 2004 the AK Party, which wanted to start accession talks with the European Union also launched a massive range of democratic reforms, such as allowing Kurdish language broadcasts on public television. Furthermore, in 2008 The AK Party initiated a constitutional amendment to lift the ban on the Islamic headscarf at universities.

Deemed anti-secular, it was negated by the constitutional court which sought a political ban on the AK Party, which itself narrowly escaped a dissolution by court order. The headscarf ban has been progressively eased since 2010.

Ömer Faruk Gençkaya, an academic from Marmara University also said, refer- ring to AK Party's past experiences, "The promises in the manifesto are perceived as positive and realistic," and added that the emphasis on active foreign policy was significant as well.

During his speech Erdoğan said that the AK Party completed a transformation in mindset since it came to power in 2002, adding that now it aims to carry out institutional transformation.

"From democracy to economy, we took steps accordingly to meet the needs of our people. We blended domestic values with the necessities of modern-democratic politics. Despite facing great resistance in the past 16 years, we made great achievements," he said.

In addition, the government has also sought to restore the rights of religious minorities as well as the places of worship for religious minorities, ranging from Assyrians to Jews and Greeks, since it came to office. Many properties have been returned to these minorities decades after they were forcefully confiscated by the Turkish state, while the government continues to pursue a policy of restoring abandoned historical buildings.

In relation to the AK Party's rhetoric in its manifesto, Uslu stressed, "AK Party high- lighted the historical and national experience which would solidify the electorates of the AK Party and the Nationalist Movement Party (MHP) and this will also resonate with other voters." Uslu also stated that manifes- tos lay parties' visions; however they do not elaborate on the ways to achieve objectives or present a road map. "Therefore, the AK Party needs to explain how it will fulfill the promises in its manifesto and inform the public about the methods that will be used in the upcoming days," Uslu said.

As there has been some criticism in relation to the ongoing state of emergency, the government officials have been underlining that it is not a breach of democracy but a necessity that stems from Turkey's legitimate concerns over national security. "When AK Party first came into power in 2002, it put great emphasis on democracy and justice which was enthusiastically embraced by people. Since then, AK Party has not given up on upholding these values despite the threats posed against its nationals security," Mustafa Kartoğlu, a journalist from the Star Daily newspaper said.

"The state of emergency is considered as a significant part of Turkey's fight against terrorism," Kartoğlu said highlight- ing Turkey's efforts to further strengthen its democracy in this process continue as well. In his party's manifesto, Erdoğan underscored that the war against the Gülenist Terror Group (FETÖ) would continue in the coming years. "They tried to overthrow the government with the Dec. 17-25 judicial coup attempts. Our people foiled their plans. The PKK and Daesh also attacked Turkey at the same time," he said.

"We will launch new operations similar to Operation Euphrates Shield and Operation Olive Branch in our new term to eradicate all terrorists from Turkey's borders," he added.