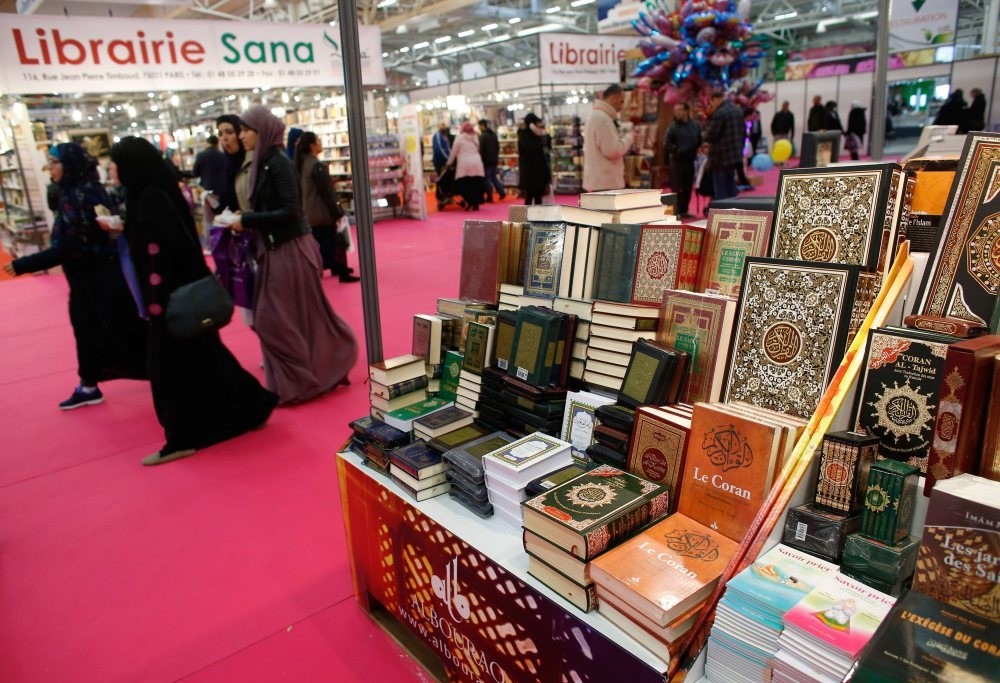 Visitors walking past a bookseller displaying copies of the Quran during the 32nd Annual Meeting of France's Muslims, at Le Bourget Exhibition center, north of Paris, April 3, 2015.
by Mehmet Çelik May 09, 2018 12:00 am

The controversial call by some 300 famous French figures to change the Quran is a provocative move which targets Muslims, experts say, as criticism against the manifesto continues to grow

The controversial call to change some verses in the Quran by some 300 famous French figures is a "racist and xenophobic" move that targets Muslims, experts say, as backlash from Muslims continues to increase. On April 21, a manifesto signed by French actor Gerard Depardieu, former President Nicolas Sarkozy, former Prime Minister Manuel Valls and others urged Muslims to denounce certain verses in the Quran that they deemed to be anti-Semitic and anti-Christian. "This is a resurfacing form of racism and xenophobia that is deeply rooted in a mentality," Emre Gönen, an academic from Istanbul Bilgi University and a columnist for Daily Sabah said. He said that as a result of a mentality that targets Muslims, the Quran is mistranslated to suit that mentality.

"You will read the verses however you want to understand them," Gönen said. According to Muslim belief, the Quran was divinely revealed to the last Prophet Muhammad, as a book that is considered as the latest version of the previous holy books. As the Quran is deemed to be the word of God, any changes made to the text would be considered sacrilegious. "It was the Muslims who brought forward civilization for a thousand years when they were ahead of Europeans. Was it not the Quran that the Muslims then believed?" he asked.

Gönen added that France is a secular country that approaches beliefs of everyone equally and such controversial moves are "provocative" and should receive criticism from the "sound minded French public."

France is home to one of the largest Jewish communities in Europe. France is also home to nearly 5.7 million Muslims, which is about 8.8 percent of the country's population.

The French government has previously made controversial changes to its laws which had sparked criticism from its Muslim population. France was the first country to ban the burka, the full-face cover some Muslim women wear, in 2011. In 2016, the country also imposed a ban on "burkinis," a type of swimsuit worn by some Muslim and also non-Muslim women, under then Prime Minister Manuel Valls' government.

The effectiveness of social integration policies regarding the Muslim minority in France has long been questioned, and the country has been accused of fueling marginalization and racism against underprivileged groups, which has created anger and deep resentment among young immigrants in the country. Periodic upheavals and clashes in the suburban areas of some provinces has reflected that anger.

Tareq Oubrou, a French imam who oversees the Grand Mosque of Bordeaux, was quoted in the Atlantic magazine as saying that the interpretation of Quran by the mentality of the signatories "is the falsified interpretation promoted by the very radicals France seeks to combat: ignorant Muslims who remove texts from their historical context."

According to the Atlantic article, "Oubrou argued that the problem is not religion itself - it's that through radical, literalist interpretations of the Quran, delinquents use the religion as a veneer for cheap crimes."

In recent years, Islamophobic acts have been on the rise in France and Muslims have complained of being subject to discrimination.

Marine Le Pen, the leader of the anti-immigrant National Front (FN) party had previously said that they will prohibit substitution meals provided for Muslim and Jewish students on municipalities headed by National Front administrators because it "is a violation of the principle of secularism."

"It is horrifying that such a proposal is made in a country that has the largest Muslim population in Europe," Belkıs Kılıçkaya, a journalist who lived in France for many years said, and underlined that the term "Islamophobic" fails to define the people who signed this proposal.

Criticism over call to change Quran continues to grow

After the controversial call that blamed Islam for a "new anti-Semitism" wave, 30 mosque rectors and other prominent Muslims published an appeal in Le Monde saying Islam is being "confiscated by criminals," an Associated Press (AP) report said. The appeal also urged the community leaders not to hold Islam accountable for the actions of some extremists.

Large scale criticism has also been voiced by Turkish politicians and the Turkish Directorate of Religious Affairs.

President Recep Tayyip Erdoğan said that those who claim that the holy book includes violence would want to ban the Bible or Torah if they had read them.

"We will not stoop to your level and attack your holy values even though you are attacking ours," Erdoğan said Tuesday during his speech at the ruling Justice and Development Party's (AK Party) parliamentary group meeting in Ankara.

He said the so-called concerns over the language of the Quran were not genuine but signs of Islamophobia, racism and xenophobia.

The Turkish government has repeatedly warned European countries over increasing anti-Islam tendencies, with Erdoğan saying that Muslims being targeted with violence is also a threat to the social cohesion in European society.

He added that even though the Quran was attacked, Muslims would not do the same to the sacred values of others.

"Even if you attack our holy book, we will not do the same to yours," the president said.

The Directorate of Religious Affairs said in a statement that the signatories of the manifesto "are the Western version of Daesh," who also use distorted interpretations of the Quran to further their own agenda.

Addressing his fellow party members at the CHP's parliamentary group meeting Tuesday, Kılıçdaroğlu said, "It is not the Quran that is outdated but you are. The whole world accepts the fact that Islam is a religion of peace."

The Observatory of Islamophobia, an Egypt-based group, also condemned the controversial move, calling it "racist" and a cause for extremism to grow.