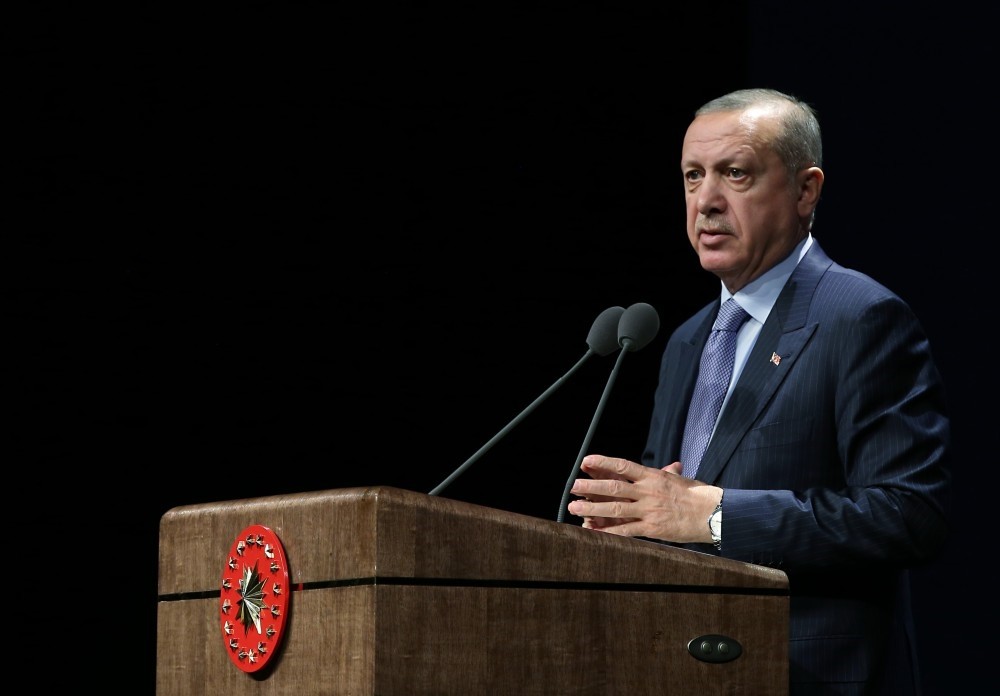 President Recep Tayyip Erdou011fan said that when u0130nce's name was announced, there were few people who could find relations between the announced qualifications of the CHP and the candidate.
by Daily Sabah May 09, 2018 12:00 am

President Erdoğan criticized CHP's leader for refusing to become a candidate, instead suggesting someone else to run. He added that the main opposition has no ground-breaking projects to be able to compete in the elections scheduled for June 24

President Recep Tayyip Erdoğan said the main opposition has failed to compete with the governments of the Justice and Development Party (AK Party) over the last 16 years and stressed that the opposition has no groundbreaking projects in mind for the upcoming elections.

Speaking at his party's weekly parliamentary group meeting Erdoğan said the AK Party has no rival in both the political race and in the race for providing services to the people. "We worked to break our own records," he added.

In relation to the main opposition Republican People's Party's (CHP) presidential candidate, Erdoğan said: "The chairman of the main opposition did not want to be a candidate. He nominated another person for the candidacy as it seems that ruling his party was more appealing than running the country."

The CHP announced Muharrem İnce, the CHP's deputy of Yalova province since 2002, as its presidential candidate last week after a series of meetings with other political parties to nominate a joint candidate failed. İnce previously voiced criticism over the party policies pursued by CHP Chairman Kemal Kılıçdaroğlu and ran twice for chairmanship against him.

Prior to the announcement of CHP's presidential candidate, Kılıçdaroğlu had described the party's candidate saying that he is someone with knowledge of economics and a person who does not involve himself in debates. However, İnce, known for his overreactions and argumentative rhetoric, was a teacher not an economist, making the CHP's candidate unqualified for the chairman's previously announced criteria.

Comparing the promises of the AK Party and the opposition for the upcoming elections, Erdoğan underlined that the AK Party is always in favor of change and developments and takes steps accordingly; while the opposition pledges to demolish what has been built. İnce previously stated that he will not use the Beştepe Presidential Palace complex if he is elected and plans to "turn the complex into a place for science."

"What kind of polices are these?" Erdoğan asked commenting on İnce's remarks, adding, "These are very simple and populist policies."

The president underscored that the AK Party announced its manifesto Sunday and will reveal the details of its future projects soon; while the opposition has no projects that will contribute to the developments in the country.

Referring to the AK Party governments' achievements and projects so far, Erdoğan underscored the development that will continue with new projects in the next term thanks to the experienced cadres of AK Party.

Meanwhile, Erdoğan stated that a meeting could be scheduled with İnce upon his request.