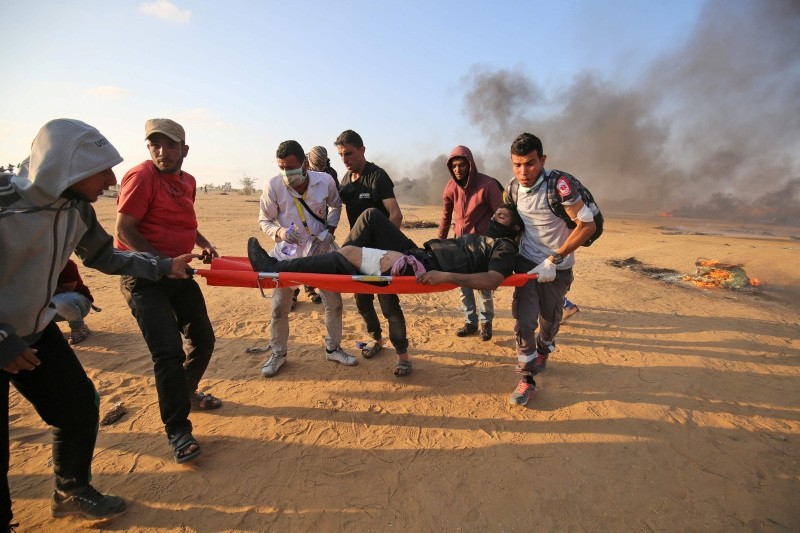 Palestinian medics carry on a stretcher a protester injured during clashes with Israeli forces along the border east of Khan Yunis in the southern Gaza Strip on May 15, 2018. (AFP Photo)
by Daily Sabah May 15, 2018 12:00 am

The New York Times ' use of passive voice to omit facts and avoid mentioning the perpetrators while describing the killings of Palestinians by Israeli soldiers during the Gaza demonstrations has led to international outrage.

The publication's tweet description of the deaths and violence during the protests and its headline for a report drew ire, with many criticizing it for being 'too soft' and unclear.

"Dozens of Palestinians have died in protests as the U.S. prepares to open its Jerusalem Embassy," a tweet read, which went viral for its shallow interpretation.

Dozens of Palestinians have died in protests as the U.S. prepares to open its Jerusalem Embassy https://t.co/2E3VDG1HMd pic.twitter.com/lMPVH2hUIs

Director Judd Apatow said in a tweet, which received thousands of likes and retweets: "'Have died.' Shame on you. This is like calling Trump's lies 'factual inaccuracies.' Please tell me an intern is running your twitter feed."

Former New York Times correspondent Stephen Kinzer also criticized the paper's perspective by tweeting: "'Palestinians have died.' Was it an epidemic? Mass suicide? Happened at a hospice? Reminds me of Nixon saying 'Mistakes were made.' No one made them, just like no one killed the Palestinians. It's why I tell my students to avoid the passive voice."

"Israeli soldiers killed dozens of Palestinian protesters along the Gaza border on Monday, and wounded more than 1,000 others."

Israeli soldiers killed dozens of Palestinian protesters along the Gaza border on Monday. At least 2,400 others were wounded, Palestinian officials said. https://t.co/9dhQmRBoVE

During Monday's protests, at least 61 Palestinians were killed and more than 2,700 injured by Israeli forces.