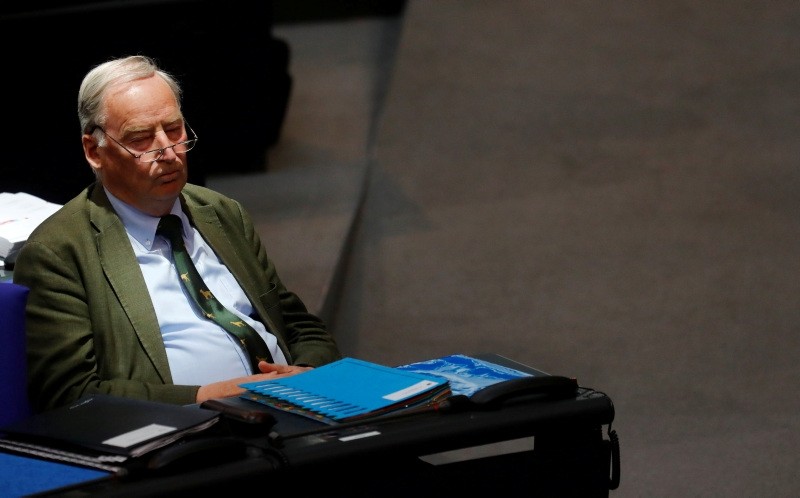 Alexander Gauland of the Anti-immigration party Alternative for Germany (AfD) attends the 2018 budget debate at the lower house of parliament Bundestag in Berlin, Germany, May 16, 2018. (Reuters Photo)
by May 17, 2018 12:00 am

German prosecutors have dropped an investigation into the far-right Alternative for Germany's (AfD) co-leader over a remark he made last year that the then integration minister should be "disposed of" in Turkey, her parents' country of origin, a newspaper reported.

Alexander Gauland made the comment about Aydan Özoğuz during a campaign speech in August 2017 ahead of nationwide elections that saw the anti-immigrant party win seats in the national parliament for the first time with around 13 percent of votes.

Around 20 complaints of inciting hatred were filed, but prosecutor Dirk Germerodt told the Heilbronner Stimme local newspaper: "The investigations have not found sufficient grounds for suspicion."

Germerodt also pointed to various rulings by the Federal Constitutional Court about freedom of opinion, the newspaper said.

Prosecutors in the central German city of Muehlhausen were not immediately available to comment.

The newspaper reported Germerodt as saying that Gauland's comments had been polemical but should also be seen as a reaction to Özoğuz's comments, which he said were also combative.

Özoğuz had said that Germany had no culture beyond its language.

Germerodt said Gauland's comments could be understood in different ways.

"In the context of the questioning, the comments were still within the bounds of free speech," he added.

Gauland, who was head of the AfD in the eastern state of Brandenburg at the time, later conceded that his words were "a little too tough" but repeated that Özoğuz "had no business being in Germany."