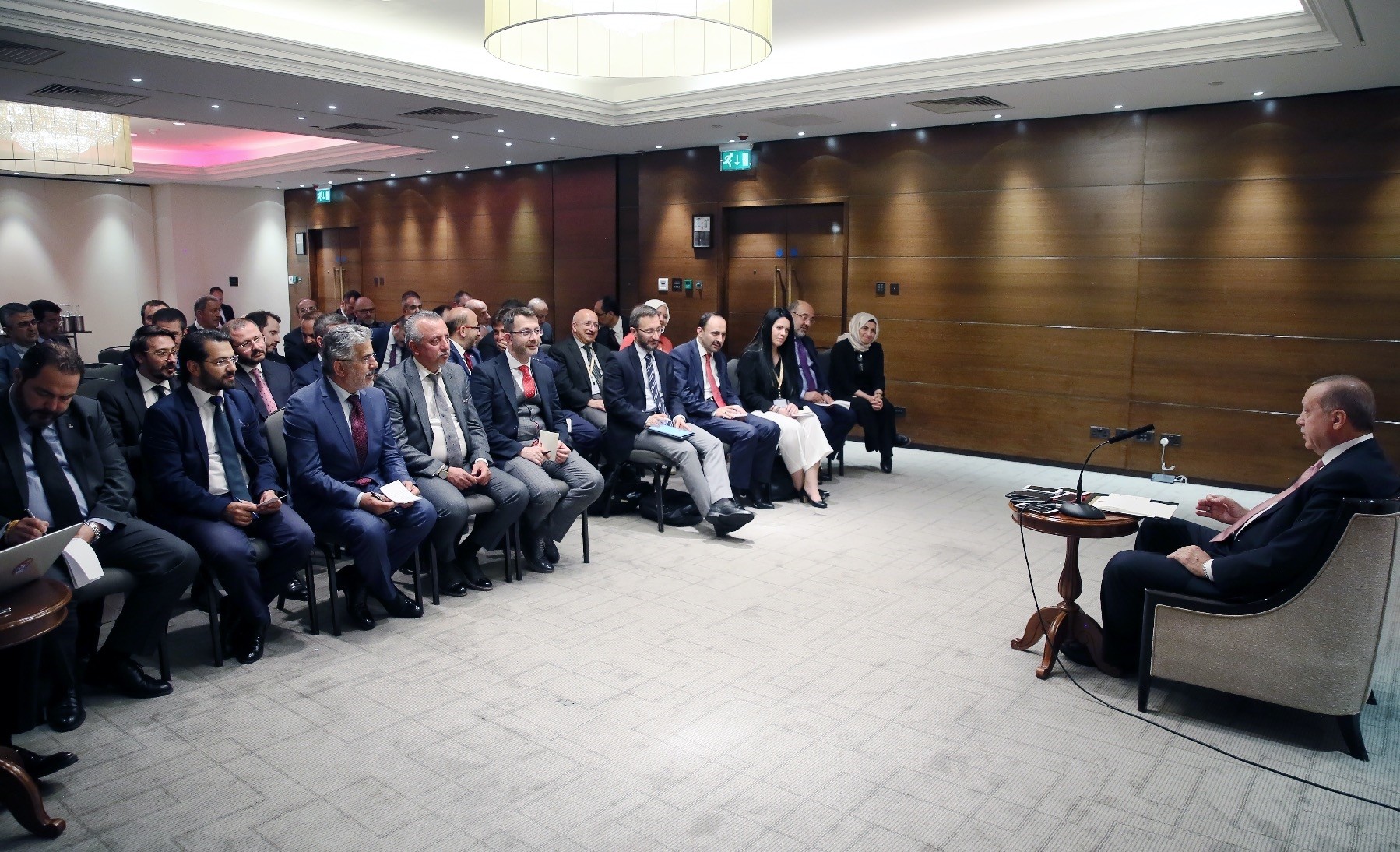 President Recep Tayyip Erdou011fan speaks to members of the Turkish press in London late on Tuesday.
by Serdar Karagöz May 17, 2018 12:00 am

Erdoğan said that it is rare to see a strong reaction against Israel's treatment of Palestinians, aside from Turkey, Iran and Russia. His remarks came amid Israel's disproportionate response to Palestinians protesting the U.S. Embassy in Israel's move from Tel Aviv to Jerusalem. During the demonstrations in the Gaza Strip, which began on Monday, Israeli forces killed 62 Palestinians and injured more than 2,000 others. The U.S. Embassy in Jerusalem was opened in a ceremony on Monday, a day before the day of the 70th anniversary of Nakba, or "catastrophe," a term used by Palestinians to describe Israel's occupation of the Palestinian territories following Israel's declaration of independence on May 14, 1948, which led to the forceful displacement of nearly a million Palestinians from the lands they had called home for centuries.

The decision to relocate the U.S. Embassy in Tel Aviv to Jerusalem was made by the U.S. President Donald Trump on Dec. 6.

"We could not remain silent on this shameful scene," the president said, adding that Turkey has taken a series of steps to address the situation. "We have declared three days of national mourning. Parliament was called to convene for a special plenary session. The Organisation for Islamic Cooperation (OIC) was called to convene on Friday in an emergency summit [in Istanbul]."

He added that two mass rallies will be held to protest Israel, one in Istanbul and one in Diyarbakır.

"We have sent the Israeli ambassador to his country and in the meantime recalled our Washington ambassador for consultations. We will continue to take diplomatic steps on these issues," Erdoğan said.

Erdoğan said that Turkey is following the developments at the U.N. through Ankara's permanent representative at the U.N. in New York.

He added that Kuwait, which is currently a temporary member of the United Nations Security Council, is also taking steps within the U.N. The president said that an evaluation will also be made after the Arab League's meeting.

"The issue may be carried to the U.N. General Assembly like last time," he added.

Following Trump's decision in December, Turkey took leadership in carrying the issue to the U.N. General Assembly after a draft resolution on the issue was vetoed 14-1 by the U.S. in the U.N. Security Council.

The president said that they have taken steps to bring some of the wounded to Turkey for treatment, however, there has been obstacles created by Israeli and Egyptian authorities.

A humanitarian aid campaign will also be launched in Turkey throughout the month of Ramadan, which began yesterday, Erdoğan added.

The Jerusalem decision prompted opposition from the international community, as the previously agreed international stance was that the status of the city should be negotiated between the Israelis and the Palestinians and that a unilateral decision on the issue would harm the religious sensitivity accorded to the city by all Muslims, Christians and Jews.

On Tuesday night, Erdoğan also spoke with Saudi King Salman over the phone and discussed Israeli violence in Gaza and this Friday's OIC summit. Erdoğan also exchanged views over the phone with the German Chancellor Angela Merkel, Russian President Vladimir Putin, Pope Francis, and his Iranian counterpart Hassan Rouhani on the recent developments.

The president reiterated that "Jerusalem is a red line" for Turkey and it's not possible to give up standing by the Palestinians.

"Standing by the Palestinian cause bothers them [Israelis]. In this framework, I don't see Hamas as a terrorist group. Hamas is one of the resistance movements to rescue the occupied Palestinian lands," he said.

Responding to a question highlighting the disagreements between Ankara and Washington, Erdoğan commented on relations with the U.S., saying that Turkey stands by what it thinks to be right.

"This is why we did not find U.S.'s unilateral withdrawal from the nuclear deal with Iran to be right. The U.S. did not sign the agreement alone," Erdoğan said, adding that other parties are also involved in the deal on Iran's nuclear activities.

He added that imposing sanctions on Iran would not be an effective way forward and that diplomacy should be used to solve the situation.

Erdoğan also said Turkey, as a NATO ally, has found no fault in purchasing S-400 missile defense systems from Russia for its defense needs. "We also have a High-Level Cooperation Council with Russia. We cannot stop buying oil, natural gas. There are five million Russian tourists coming to our country," Erdoğan said, responding to some U.S. officials criticizing the defense deal between Ankara and Moscow.

"It is Turkey's right to meet its defense needs from different sources," Erdoğan said, also adding that Ankara's NATO allies have not supported Turkey on defense-related issues.

"Our most basic expectation from the U.S. is for them to act in accordance with the spirit of alliance and strategic partnership," he added.

Erdoğan rejected the claims that there is discord within the People's Alliance, formed by his Justice and Development Party (AK Party) and the Nationalist Movement Party (MHP), saying that there are attempts to damage the spirit of unity, but it will not be allowed.

"We got on the road as the People's Alliance. We will not allow anyone to put discord between us," Erdoğan said.

Turkey will go to polls for snap parliamentary and presidential elections on June 24.

Erdoğan is the candidate of the People's Alliance against rival candidates.

The president said there are attempts exerted to ensure Erdoğan gets votes in the presidential elections, but that his party is not supported.

In the June 24 elections, voters can support a candidate but they can choose to support another party, as well.