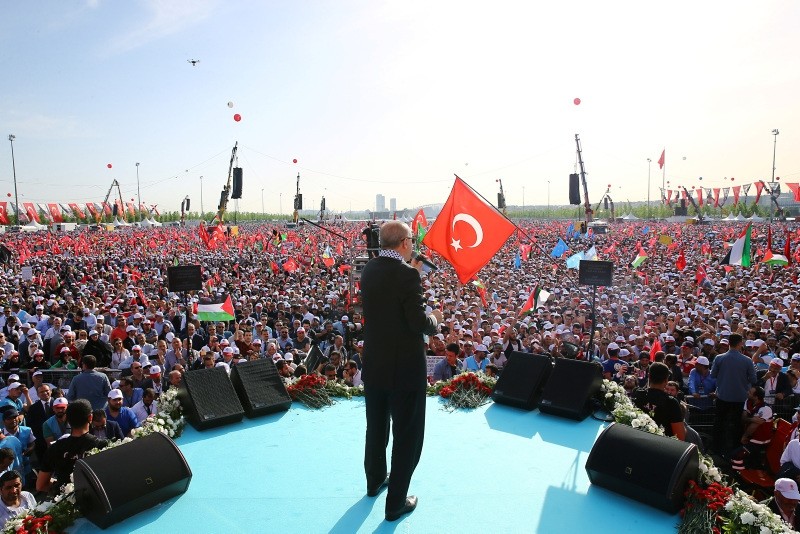 President Recep Tayyip Erdou011fan addresses the crowd in a rally against Israeli violence against Palestinians held in Istanbul's Yenikapu0131 Square. (AA Photo)
by Daily Sabah May 18, 2018 12:00 am

President Recep Tayyip Erdoğan urged Muslims to unite against the oppression of Palestinians at the hands of Israel, in a massive rally in Istanbul Friday.

Despite the scorching sun and the ongoing Ramadan fasting, tens of thousands have gathered at Istanbul's Yenikapı Square to voice their support for Palestinians and to condemn the Israeli violence against them.

"Not only the Muslim world but the entire world failed in Jerusalem cause," Erdoğan said, adding that Israel cannot continue its reckless policies if Muslims unite against oppression.

The protest under the slogan "Condemn Oppression, Support Jerusalem," was called after Israeli forces killed 60 Palestinians during protests at the Gaza border. Palestinian Prime Minister Rami Hamdallah was also invited to address the crowd at the protest.

"Turkey has always proved its stance on Palestine and Jerusalem by taking concrete steps through its diplomatic channels. The fact that Israel mostly targets Turkey and me is a proof that we are standing on the right side," Erdoğan said.

The president also lashed out on the U.S. for the relocation of the embassy and its generous support to Israel, saying its backing of a "terror state" will inevitably haunt Washington.

Demonstrators held Palestinian and Turkish flags and brandished slogans like "Jerusalem is our red line."

The rally is taking place ahead of the Organization of Islamic Cooperation (OIC) emergency meeting on Palestine and is attended by the foreign guests who arrived in Istanbul for the summit.

Another rally to protest Israel is expected to be held on Sunday in Diyarbakır.