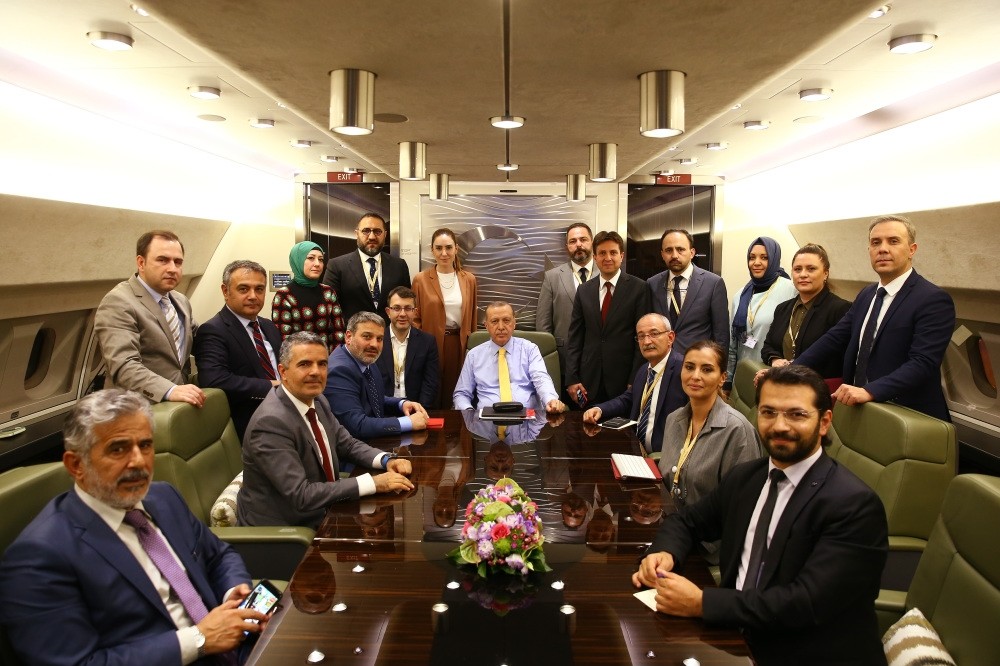 President Recep Tayyip Erdou011fan with members of the Turkish press on the presidential plane on his way back from Bosnia-Herzegovina.
by Nur Özkan Erbay
May 22, 2018 12:00 am

President Erdoğan called on the members of the Organization of Islamic Cooperation (OIC) to consider advisory decision, made by the 57-member Muslim body to take economic and political measures against Israel. He also said they should deliberate on countries that follow the U.S.' decision to relocate its embassy from Tel Aviv to Jerusalem

Late on Sunday, President Recep Tayyip Erdoğan called on the members of Organisation of Islamic Cooperation (OIC) to implement the advisory decision taken to boycott Israeli products in the extraordinary summit last week. "In this regard, as the Organisation of Islamic Cooperation, we have advised on the implementation of a boycott of their products. I wish that members of the OIC will go into boycotting in the direction of the advice received from the countries," Erdoğan told members of the Turkish press accompanying him during his visit to Bosnia-Herzegovina.

Underscoring Turkey's stance on boycotting Israel, he said that Turkey will consider the situation and take necessary steps after the general elections in Turkey which will be held on June 24.

"As Turkey we will put on the table our relations, especially economic, trade relations. There is an election forthcoming, we will take our steps in this direction after the election," he added.

The OIC's final communique had declared "determination to take the appropriate political, economic and other measures" against countries which follow the U.S. move in recognizing the holy city as the Israeli capital and move their embassies from Tel Aviv to Jerusalem.

The European Union issued guidelines in November 2015 for the labeling of products from illegal Israeli settlements in the occupied Palestinian territories, after years of fierce Israeli opposition. Tel Aviv summoned EU ambassador as protest after the decision.

Erdoğan also said that Turkey also made a recommendation for a creation of a peace force that will established by United Nations in Israel to increase the deterrence during the OIC meeting. He said that it will not be easy for Israel to fire a bullet at U.N. forces.

On May 14, the U.S. executed its decision, made on Dec. 6, to relocate its embassy in Israel from Tel Aviv to Jerusalem, sparking international criticism. Turkey, as the rotating term president, had called on the OIC to hold an emergency meeting last Friday. A large mass rally was also organized in Istanbul on the same day. Turkey has also taken diplomatic steps against Israel. The Israeli envoys in Ankara and Istanbul were told to leave the country for some time after the controversial move on May 14. Turkey also declared a three-day period of national mourning for Palestinians killed by the Israeli forces during the protests on the Gaza Strip against the decision.

The president was reminded about his criticism over the five permanent members at the U.N. Security Council (UNSC), in which he says decisions made by only five members cannot be just, and whether the European countries adapt the same approach as him.

Erdoğan reiterated his message that the current world order that grounded on the same old countries. He said that everybody is disturbed by this understanding but nobody is acting to change it.

"My observation is that those in the five are not very interested in the subject. Those who were outside the five, unfortunately just say that 'you're right, you're telling the truth,' but when it comes to doing something, there is no action," he said.

Merit, competence are important indicators for the candidate list

He unveiled the features of the candidates and reiterated that merit and competence are important indicators in order to constitute the candidate list for the general election. Erdoğan also stressed that the candidate's selection was also based upon participation on parliamentary work hours. "We do not choose candidates who do not pay attention to our principles in Parliament and have not been sensitive to the attendance," he said.

Highlighting the candidate selection criteria, Erdoğan also emphasized that the written commitment taken from the candidates will be effective during the election period.

"Capacity, merits are important. And this time we showed one another sensitivity too. We got a written commitment from the candidates. You are in Ankara for three days a week. Except for three days, all of you will have offices in the area of your election area. You will be conducting election campaigning in those offices. You will also report your works here every week.' We took written promises from our friends," he continued.

Responding to a question regarding the Republican People's Party's (CHP) presidential candidate, Muharrem İnce's recent claims that the Americans called him about the Gülenist Terror Group (FETÖ) leader Fetullah Gülen's extradition, Erdoğan said that this was not true and consisted of lies.

"Why would Americans call Mr. İnce? Why do they call a non-contact person or a non-authorized person? There is a law," he replied.

Erdoğan was also asked about the latest assassination claims toward himself. He pointed out that a notice has reached the National Intelligence Organization (MİT) from various parts of the world and various intelligence organizations.

"Upon this, MİT did intensive work and interviewed the interlocutors. They put our teams on alert. I told the undersecretary of MİT to 'go ahead one day in advance'. He went a day ago, we took our precautions," the president said.

The president said that he is not receiving such notices for the first time either at home or abroad.

Support for Bosnia to continue

Providing information about his visit to Bosnia-Herzegovina, Erdoğan stated that Turkey will keep supporting the country in the international arena.

"We covered a significant distance with the FETÖ fight. The Maarif Foundation has started to open schools here. We will continue to support Bosnia-Herzegovina on the international arena. ... Bosnia's peace and stability is vital for the Balkans and therefore world peace," he said.

Touching upon Turkey's economic ties with Bosnia, Erdoğan also mentioned that trade volume between the two countries is expected to increase.

"During the inter-delegation meetings in 2017, our businesspeople, together with those from different countries, found $800 million. Our goal now is to reach a billion dollars rapidly. ... We are accomplishing important projects with the Bosnia-Serbia-Turkey trilateral mechanism and we will accomplish more hopefully. One of the most important of these is the Belgrade-Sarajevo highway project," he concluded.