Turkey to take every initiative to protect its firms from US sanctions, MFA Spox Aksoy says 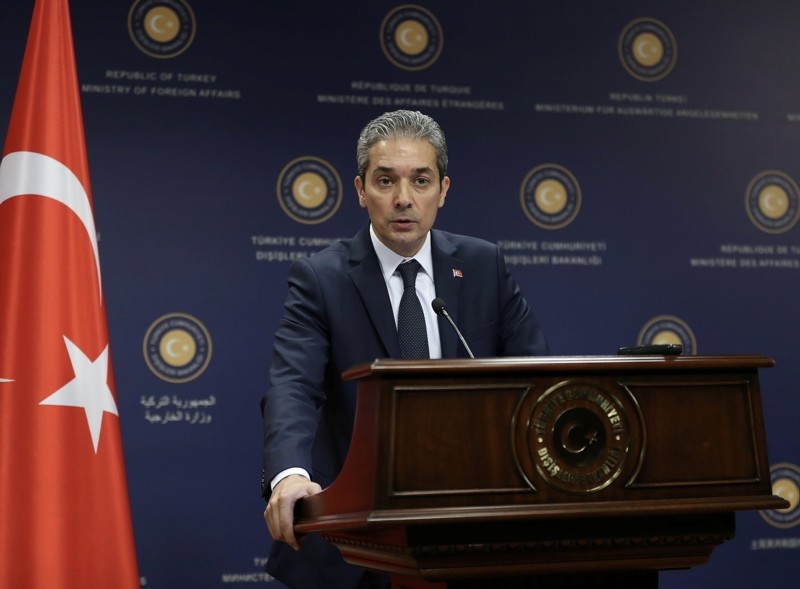 Foreign Ministry Spokesperson Hami Aksoy said early Friday that Turkey would take every initiative to protect its firms from U.S. sanctions following a decision by the U.S. Treasury Department to impose sanctions on several Iranian and Turkish companies in a bid to target Iranian airlines.

During a news conference in Ankara, Aksoy said that Turkey "fulfilled all requirements" to produce Lockheed Martin's F-35 jets from the United States, underlining that it was a multinational program with set responsibilities.

"Such steps are contradictory to the spirit of alliance we have with the U.S.," Aksoy said.

A U.S. Senate committee passed Thursday a defense policy bill, in which measures to prevent Turkey from purchasing the F-35 jets were included.

Aksoy said the latest U.S. move aimed to persuade Turkey to drop its S-400 defense system deal with Russia and release American pastor Andrew Brunson, who is held in Turkey on terror charges for his links to the PKK and the Gülenist Terror Group (FETÖ).

The foreign ministry spokesperson also touched upon thw U.S.' military presence in Syria's Manbij, saying that a U.S. delegation arrived in Turkey for detailed talks regarding this issue.

Aksoy recalled that after former U.S. Secretary of State Rex Tillerson's visit in February, working groups were established between Turkey and the U.S. to discuss a number of issues, including the stabilization of Manbij and preventing any undesirable clashes.

He added that the groups' solutions for such issues would be discussed during Foreign Minister Mevlüt Çavuşloğlu's meeting with his U.S. counterpart Mike Pompeo on June 4 and later be finalized.