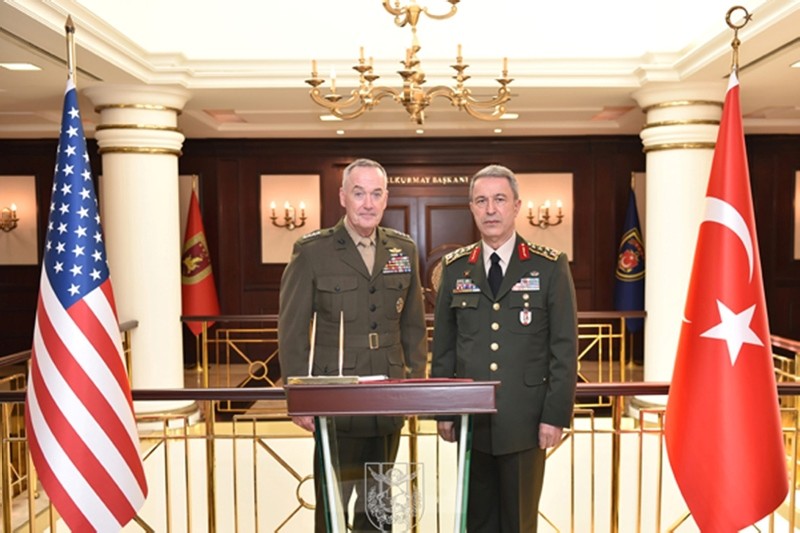 Gen. Joseph Dunford, chairman of the U.S. Joint Chiefs of Staff, spoke with his Turkish counterpart Gen. Hulusi Akar over the phone early Saturday, according to the Pentagon.

"The two leaders continued their ongoing conversation regarding Syria, to include ensuring the lasting defeat of Daesh," said Pentagon spokesman Col. Patrick Ryder.

"The U.S. and Turkey enjoy a strong military-to-military relationship as key members of the NATO alliance," he added.

The relations between the two countries are going through the worst period in the last decade. The presence of Gülenist Terror Group (FETÖ) leader Fetullah Gülen in U.S. state of Pennsylvania remains a key problematic issue, especially after the bloody July 15, 2016 coup attempt blamed on FETÖ. Turkey has repeatedly called for Gülen's extradition and said enough evidence was presented, whereas the U.S. has responded that it is a judicial issue.

The two NATO allies are also at odds in their policies in Syria. While the U.S. supports the Syrian Democratic Forces (SDF) on the ground, Turkey says that the group is nothing but an extension of the PKK terrorist organization, also designated a terrorist group by the U.S., the EU and NATO.

U.S. support for the People's Protection Units (YPG), who operate under the SDF umbrella organization, has long been opposed by Ankara, which says a terrorist group cannot be a partner in the fight another terrorist group.

In addition, due to the YPG's organizational links to the PKK, Ankara says U.S. weapons given to the YPG could be used by the PKK against Turkey and Turkish citizens.