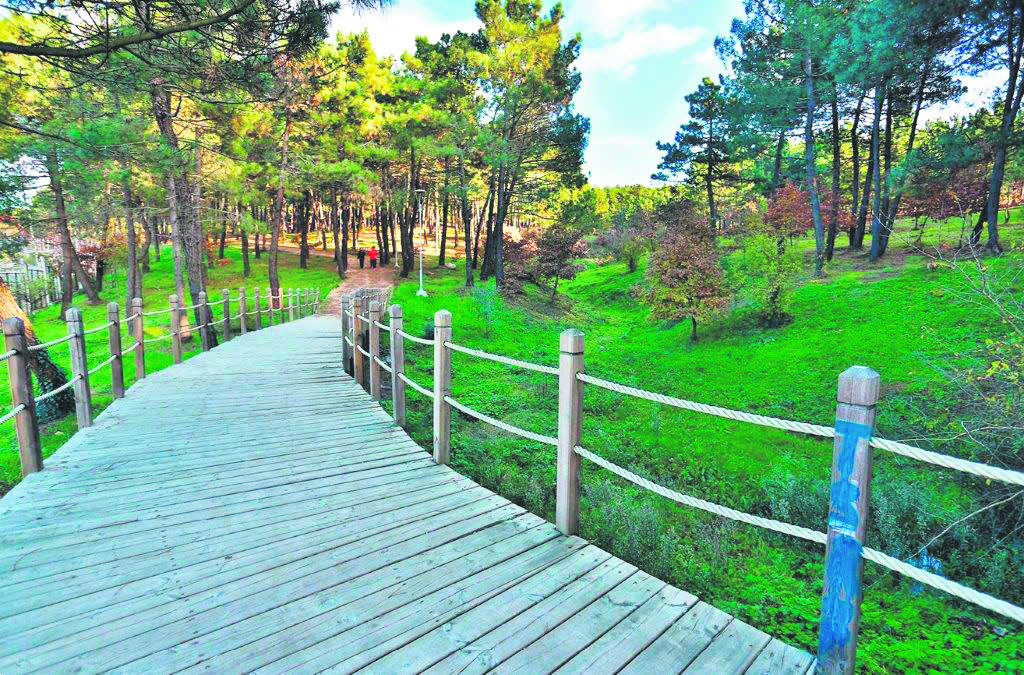 Turkey's urban centers look set for major transformations as the Justice and Development Party's (AK Party) June 24 elections declaration pushes a "city parks" concept that proposes turning old public spaces into parks, a move which will further advance the party's environmental agenda in the upcoming term.Earlier on May 24, AK Party Chairman and President Recep Tayyip Erdoğan announced that Istanbul's Atatürk International Airport be transformed into a massive 12 million square meter garden once the city's new airport is operational. In a televised interview Tuesday, Erdoğan said: "The 12 million square meter Atatürk Airport will be replaced by a 'People's Garden.' It will be four times the size of Central Park… We plan to implement similar projects in all our provinces. We will also transform the Ankara racetrack into a public park."

In another interview, Erdoğan said that the current airport terminal building could be used as a fairground and/or a museum, adding: "Projects will be shaped according to our needs."

With the new park in the heart of Istanbul, Erdoğan said, people will get an opportunity to spend time with nature.

According to the World Cities Culture Forum's data from 2015, the percentage of green public spaces in Istanbul was at 2.2. In 2016, the Istanbul Governor's Office announced that 45.25 percent of the city was forestlands.The government remains determined to continue efforts to create a greener Turkey. Forestry and Water Minister Veysel Eroğlu in September 2017 said: "We will plant 350 million trees this year. Last year, we planted more than we planted a total of 3.750 billion trees. We will make a new record this year by planting 4 billion trees."

The Turkish government faced critics in mass riots in 2013 after the Istanbul Metropolitan Municipality decided to redevelop the titular Gezi Park, adjacent Taksim Square at the heart of Istanbul. Officials had plans to rebuild an Ottoman-era building in the area. The Gezi protesters accused the government of eliminating green public spaces. What followed were nationwide riots that led to the torching of cars, public property and injuries in a matter of a few days. The riots were joined by some terrorist groups, including the PKK and the Revolutionary People's Liberation Party-Front (DHKP-C), along with fringe factions linked to them.

According to a report by the AK Party that explains the activities and performance of the government in the past decade, between 1992 and 2002, the government oversaw afforestation work in some 743,000-hectare area. This number has increased six-fold between 2003 and 2017. During the last decade of the AK Party-led government, 4.9 million hectare area was used for forestation. The same report revealed that some 1.5 million hectares of new forest was also created in Turkey.

The AK Party came into power in 2002 general elections and has been in power since. The report claimed that between 2003 and the end of 2017, 4 billion saplings were planted. It adds that the aim was to boost that number to 4.5 billion by the end of 2019. The report cited said that Turkey produces its own saplings and distributes it to municipalities and citizens free of charge.

The government has also a new project that aims to establish a city forest in every urban area. It has established 145 city parks established since 2003 while pushing the number of green recreational spaces from 94 to 1,324.

The president said the city park in Atatürk Airport will be much larger than the Central Park in New York and Hyde Park in London.

Erdoğan said apart from the Atatürk Airport, specific areas in Istanbul's Başaksehir, Maslak, Pendik and Bakırköy, as well as Ankara's Atatürk Cultural Center, will also be turned into green spaces.

"We have built a new stadium in [western province of] Eskişehir as you know, and the old stadium is now being transformed into a People's Garden. In Bursa and Trabzon we have similar projects...," he added. Erdoğan earlier said that relevant institutions were working on the project and aim to further develop it.

The government has also spent more than $4.2 billion on urban planning and environment investments since 2003.