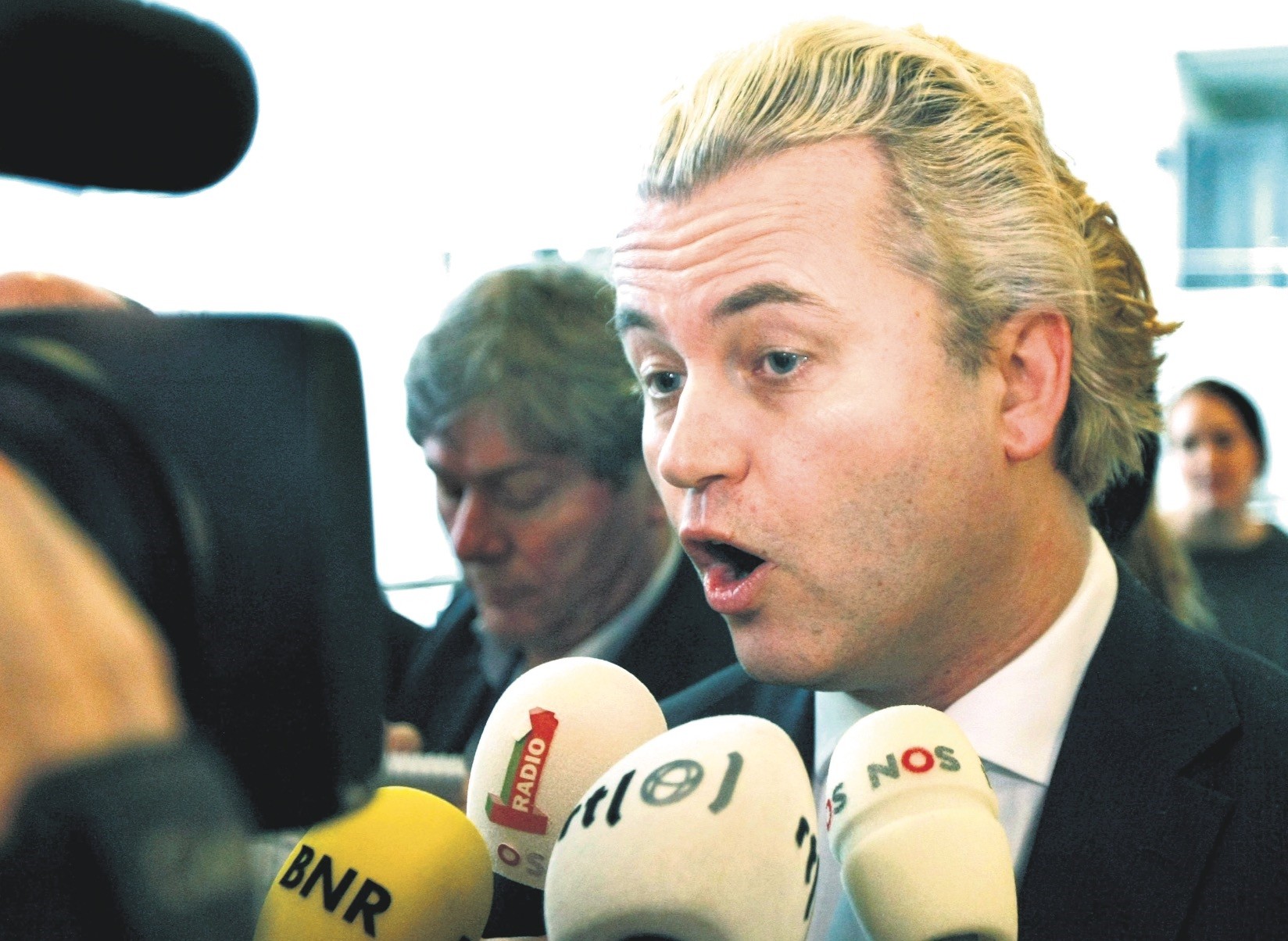 PVV leader Geert Wilders put forward a fiery platform in the country's 2017 general elections, vowing to close mosques, ban sales of the Quran and halt the immigration of Muslim refugees.
by Daily Sabah Jun 14, 2018 12:00 am

The Islamophobic acts have escalated in Europe, the latest coming from the Netherlands, where a Dutch party has been permitted to organize a cartoon competition that depicts the Prophet Muhammad – a move seen as blasphemous by many Muslims

Dutch far-right party, Netherland's Freedom Party (PVV) announced Tuesday plans for a cartoon competition that depicts Prophet Muhammad (Peace Be Upon Him), a blasphemous act for Muslims, which will be put on display in the party's parliamentary offices.

Geert Wilders, the leader of PVV, announced on Twitter that the country's National Security and Struggle against Terrorism Coordinator (NCTV) Dick Schoof permitted the party to hold the contest. The coordinator expressed that there is no security risk concerning the contest since it will be hold in a highly secured room of the parliamentary building, news reports said.

For many Muslims around the world, depicting the Prophet Muhammad's (PBUH) images is a blasphemous act, which is why there have been violent responses previously, provoked by such acts. Previously, three Danish embassies were attacked and at least 50 people were killed in rioting in 2006 in the Middle East, Africa and Asia, after drawings of the Prophet Muhammad, images many Muslims consider blasphemous, were published in the Danish newspaper Jyllands-Posten.

Wilders then applied to Khadija Arib, a Moroccan-Dutch politician of the Labour Party serving as Speaker of the House of Representatives of the Netherlands, to use his right to organize an event in the Parliament for a day in the year to hold this competition. However, following his application, Wilders claimed that Arib was extending the permission process unnecessarily despite initially responding positively to the request.

"Her love to Muhammed is more than her freedom of thought," Wilders said, referring to Arib'S Muslim past. Arib preferred to keep her silence over Wilders' claims.Wilders also stated that the reason why he is holding this contest is to put an emphasis on the freedom of thought, not to provoke the people.

In 2016, Wilders was convicted for discrimination. After a three-week trial, judges in December 2016 found Wilders guilty of discrimination against Moroccans during a 2014 election rally, when he asked supporters whether they wanted "fewer or more Moroccans in your city and in the Netherlands."

Some 6,400 people, many of them Moroccan immigrants, complained about his comments to the prosecution.

The judges ruled that due to "the inflammatory nature in which the statements were made, others were encouraged to discriminate against people of Moroccan origin." But they added there was "insufficient evidence" to find that his words amounted to incitement to hatred and acquitted him of hate speech. They also did not impose any sentence or fine.

After the 2016 verdict was handed down, Wilders vowed he would never stay silent, and has remained true to his word.The winner of the competition, which is open to everyone, will win 5,000 euros while the second will win 2000 euros. The funding of the prizes comes from an anonymous donor.

The judge of the competition consists of Wilders and Boch Fawstin, who was attacked by extremist terrorists in 2015 in U.S., Texas, during a cartoon competition in which he won a prize.

Wilders put forward a fiery platform in the country's 2017 general elections, vowing to close mosques, ban sales of the Quran and halt the immigration of Muslim refugees.

His PVV party came in second behind the Liberal VVD party of Prime Minister Mark Rutte. Wilders now heads the biggest opposition party in the Dutch lower house of Parliament. His success was repeated in municipal polls this year, when his party also won seats in some 20 local councils, more than ever before.

In April, Wilders said his PVV was working on a bill to go before the Dutch parliament to pass "legislation to outlaw as much Islam as possible."

Hate crimes against mosques and Muslims have been on the rise across Europe in recent years, fueled in part by the success of anti-immigrant, Islamophobic groups in gaining political power.

Austria has been one of the main European countries with a surge in Islamophobic tendencies. Austria's right-wing government said last week that it is closing seven mosques and plans to expel imams in a crackdown on "political Islam" and foreign financing of religious groups.Turkey bashed Austria's move, accusing the country of racism. President Recep Tayyip Erdoğan slammed Austria's decision on Saturday. Speaking at an iftar dinner organized in Istanbul, Erdoğan warned that the steps taken by Kurz's far-right government might "bring the world closer to a crusader-crescent war."

"You are going to do this, and we're just going to sit idle? We will take some steps too," he said. "The Western world should get their act together."