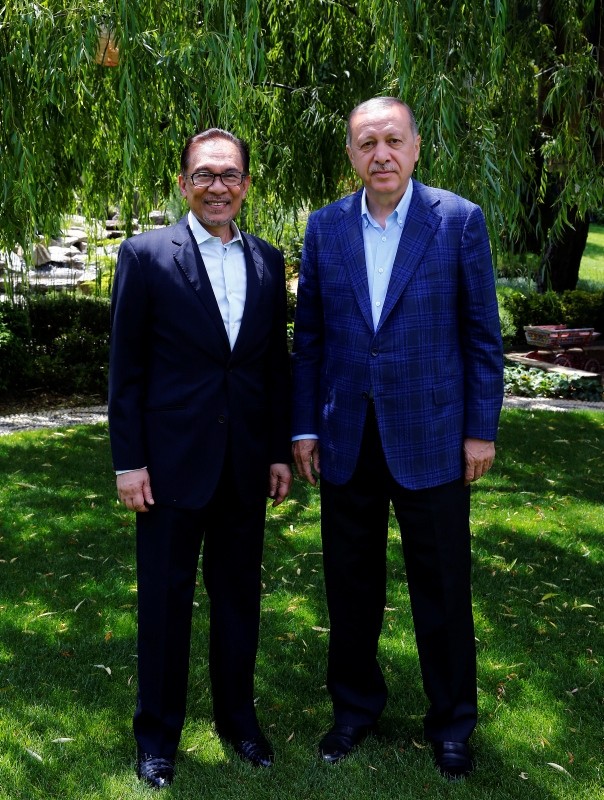 Ibrahim, 70, formerly served as Malaysian Prime Minister Mahathir Mohamad's deputy. He came to Turkey with Erdoğan's invitation upon his release from prison last month after being sentenced to five years behind bars in February 2015.

His release marked the first major success of the newly-elected Pakatan Harapan coalition.

Mahathir, 92, has promised to hand over the premiership to Ibrahim within a year or two.

In an interview with Anadolu Agency, Ibrahim described Erdoğan as "the most popular leader among Muslims of Malaysia and outside Malaysia because of his position on Palestine and on what happened to the Middle East."

Ibrahim said he supports Erdoğan in the upcoming presidential and parliamentary elections in Turkey "because there is one leader who shows courage against the powers in the world."

"Very few leaders of the world would have that courage to go and fight for justice," he said.

Ibrahim recalled that the Turkish president invited his wife and daughter to Turkey while he was in jail.

"Every time [Erdoğan] meets [former] Prime Minister Najib [Razak] or Deputy Prime Minister Zahid [Hamidi], he always makes it a point to remind [them] about my release," Ibrahim said, recalling that Erdoğan also invited him to Turkey as soon as he was freed from jail.

"Jail is, of course, a hell on earth, but as I always say, God is kind and supportive. But the rules are difficult. You lose weight, you become sick, you have injuries, lots of problems," Ibrahim said.

In a separate event organized by the Political, Economic and Social Research Foundation (SETA) in Istanbul, Ibrahim reiterated his praise for Erdoğan as a leader who speaks against atrocities in the world.

"… In Tunisia, Pakistan, India every time I speak, I mention [Recep] Tayyip Erdoğan, [I tell them] 'see him as the sole voice of courage in the Islamic world.'"

"You can agree or disagree [with Erdoğan] politically; it is a different issue. But he is the one person who has the courage to speak up against atrocities facing the Palestinians, even the Rohingya [Muslims]," he said.

He said every country should be able to make their own future.

Ibrahim said it should be people of Turkey who "decide the future of Turkey, not the west or the liberal agenda."

Ibrahim recalled he was in prison during the defeated coup of 2016, which left 251 people martyred and nearly 2,200 injured. He said he learned about the coup bid from a prison officer. "I had no TV, no radio, no newspapers. I just prayed, read the Quran and prayed and prayed and prayed for the safety for my brothers and sisters and safety for this great country."

He added: "If there is an attempt… to sabotage democracy and democratic process, I will not compromise.