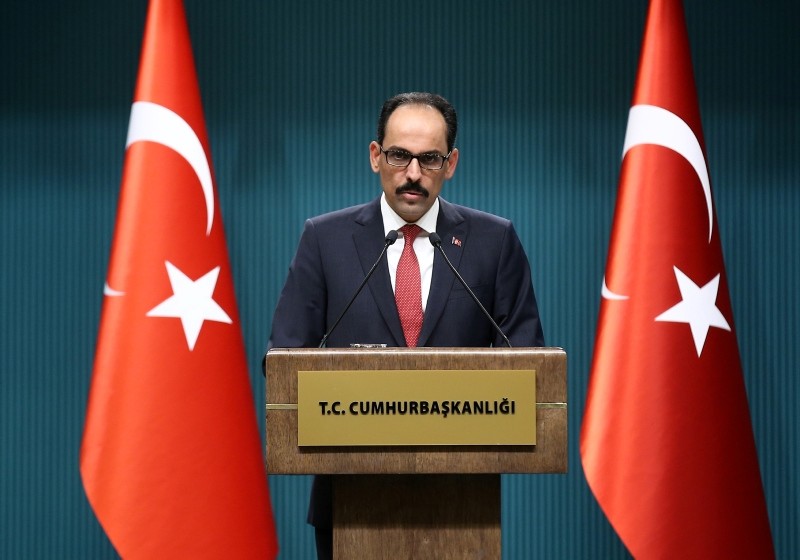 Kalın, in a written statement, said he participated to the "Newshour" program on Monday to comment on Sunday's elections in Turkey.

In the last part of the interview, the British host mentioned the PKK terror group and Kalın's response was censored, Kalın said.

Kalın said he talked about Turkey's simultaneous fight with PKK, Daesh and Gülenist Terror Group (FETÖ) in the censored part of the interview.

Responding to the host's question, Kalın stressed that it was wrong to call certain individuals jailed on terror charges "journalists," he said.

"I asked the British host, who was using PKK rhetoric, the question of 'did you ever go Diyarbakır [southeastern Turkey]?'" Kalın said adding that the host had answered "no."

Kalın invited the British host to Diyarbakır to see the regional realities with his own eyes, not through the lens of the PKK terror group, still according to the presidential aide.

The PKK -- listed as a terrorist organization by Turkey, the U.S. and the EU -- waged a terror campaign against Turkey for more than 30 years and has been responsible for the deaths of nearly 40,000 people.

Kalın also gave his take on Sunday's presidential and parliamentary elections in Turkey during the program.

Rejecting a claim of the radio program that "the elections were not done in fair conditions," Kalın said the Turkish election system was very open, strong and transparent and that there were representatives from all parties near the ballot boxes.

"On the other hand, the high rates of turnout demonstrated clearly the belief of the nation in the system and democracy," Kalın stressed.

Kalın also responded to the host's claim about a "one-man rule" and said the new presidential system would enhance the separation of powers.

Kalın added that they had trouble understanding this argument since the authority of the Turkish president is not as encompassing as that of an American president.

On Monday morning, Turkey's official electoral commission announced that Recep Tayyip Erdoğan had won an absolute majority of the presidential vote (52.5 percent) after 97.7 percent of the ballots had been counted.

The voter turnout rate was over 86 percent.