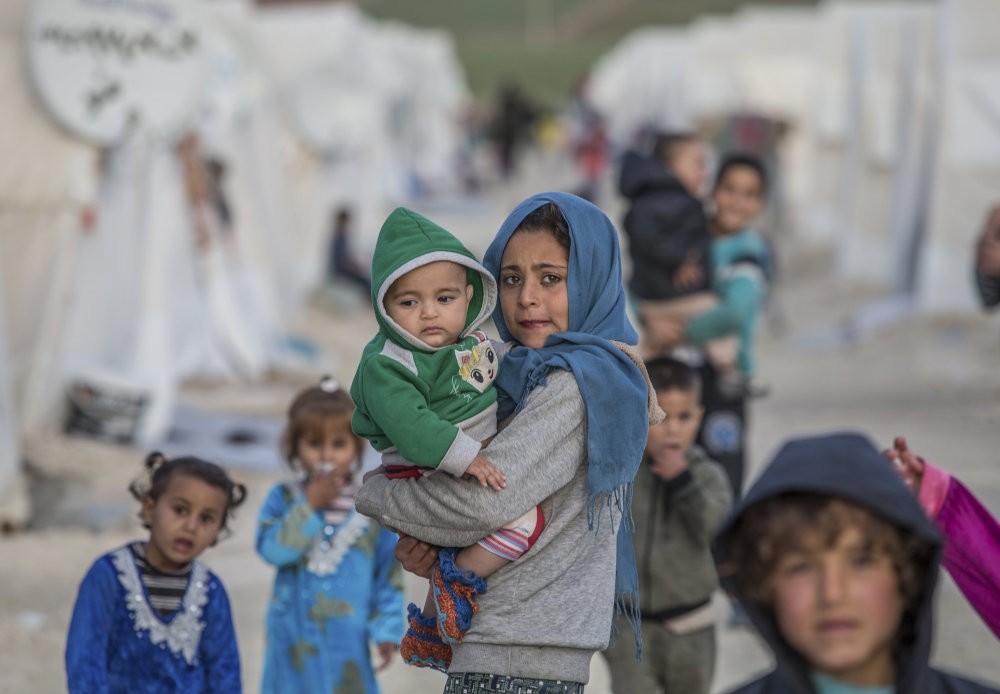 Afrin was liberated from PKK-affiliated groups with Operation Olive Branch.
by daily sabah
Jul 03, 2018 12:00 am

A Turkish nongovernmental organization has opened a clothing store in Afrin, northwestern Syria, where locals who are in need can go and meet their clothing needs for free.

The Humanitarian Relief Foundation (İHH) had opened the store in Ramadan, the Muslim holy month of fasting that stretched from mid-May to mid-June. According to Anadolu Agency (AA), 100 families have already benefited from the store.

Afrin, previously controlled by the PKK terrorist group's Syrian affiliate, the People's Protection Units (YPG), was liberated with Operation Olive Branch. The operation, carried out by Turkish military and the Free Syrian Army (FSA), was launched on Jan. 20 and lasted until March 18, when the Turkish authorities announced that the Afrin town center was cleared from the YPG.

"Those in need are determined in advance and a shopping card is given to them. With the card, the families can get the clothing they need from the store," IHH media representative Selim Tosun told AA.

The clothing for the store, called "Charity Bazaar," is manufactured in Reyhanlı, Hatay, a province that shares a border with Syria. The workers employed in the manufacturing warehouses are mainly women who have lost their husbands in the war in Syria.

"This means that clothing manufactured by Syrian mothers is being sent from Turkey to Afrin," Tosun said.

With life returning back to normal in Afrin, many services are also now run by the locals. A city council has been established and also a police force consisting of locals in Afrin is now on duty in the city.

Tosun added that the Charity Bazaar will continue to provide its services for the rest of the year.

services to Afrin residentsMinistry of Health personnel work 24-hours-a-day, seven days a week in hospitals in the Afrin city center and the towns of Jinderes and Bulbul. Medical vehicles also periodically patrol towns and villages in the area to reach out to civilians in need.

In areas such as Raju, Shaykh al-Hadid, Mabatli, Sharan and Kafr Sahra, health centers are being set up.

According to data from the Hatay governor's office, since early April when health facilities started to provide services, 17,236 people have been treated and 2,288 people have been vaccinated. Some 42 babies were born in Afrin Hospital, and 297 extremely sick patients were sent to Turkey for treatment. Currently, 68 Turkish medical personnel work in the health facilities in Afrin.

Following the operation in Afrin, the number of people returning to their homes

has increased. Officials previously said they expect nearly 300,000 locals to return to Afrin. Turkish security forces and Free Syrian Army (FSA) members patrol the area and conduct operations to eliminate explosives planted by the terrorist group before they fled the town. Since the Syrian civil war broke out in 2011, Turkey has had an open-door policy for refugees and lends support to alleviate their suffering. Playing a pivotal role in the migration crisis, Turkey hosts over 3.5 million refugees and has spent more than $30.2 billion to meet their needs. An estimated 227,894 Syrians stay in temporary refugee centers in the provinces of Hatay, Gaziantep, Şanlıurfa, Kilis, Mardin, Kahramanmaraş, Osmaniye, Adıyaman, Adana and Malatya, , while 3,272,150 other Syrian refugees live in various other cities in Turkey.