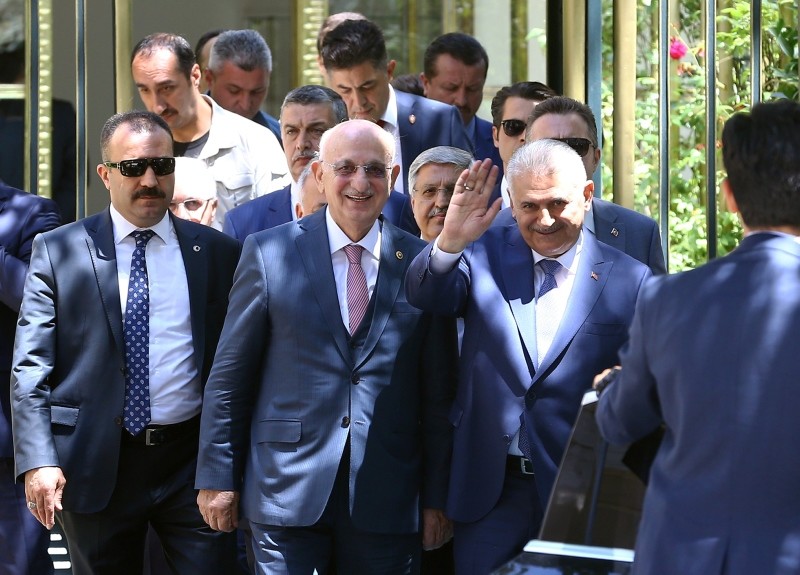 The last prime minister of Turkey, Binali Yıldırım, was on a farewell tour Tuesday in capital Ankara where he met with several Turkish authorities with just a few days left until the country switches to the new executive presidential system, abolishing the prime ministerial post.

Yıldırım met with Parliament Speaker Ismail Kahraman and visited the Supreme Court, the Turkish General Staff, the Council of State, the Presidency of Religious Affairs (Diyanet), the Constitutional Court and Turkey's public broadcaster, the Turkish Radio and Television Corporation (TRT). He also met with the staff at the Çankaya Palace that houses the Prime Ministry.

Having served the country as the Transport, Maritime Affairs and Communications minister in the 58th, 59th, 60th, 61st and 64th governments, Yıldırım became Turkey's prime minister in May 2016. With the constitutional changes approved in the April 16, 2017 referendum, which envisaged a new executive presidential system, it was decided that the prime ministerial post would be abolished.

Even though Yıldırım would normally be leaving his post after the presidential and general elections originally set for November 2019, the snap elections on June 24 meant an early end to his career as prime minister.

In addition to his success as a political leader, the 62-year-old Erzincan native's warm wit and endearing jokes have made him a favorite among Turkish citizens. Yıldırım was admired for his strength and commitment to upholding democracy during and after the July 2016 failed coup attempt in which 249 people were killed and thousands of others injured.

Yıldırım has been instrumental in helping Turkey transition from a parliamentary system to an executive presidency following the April 2017 constitutional referendum.