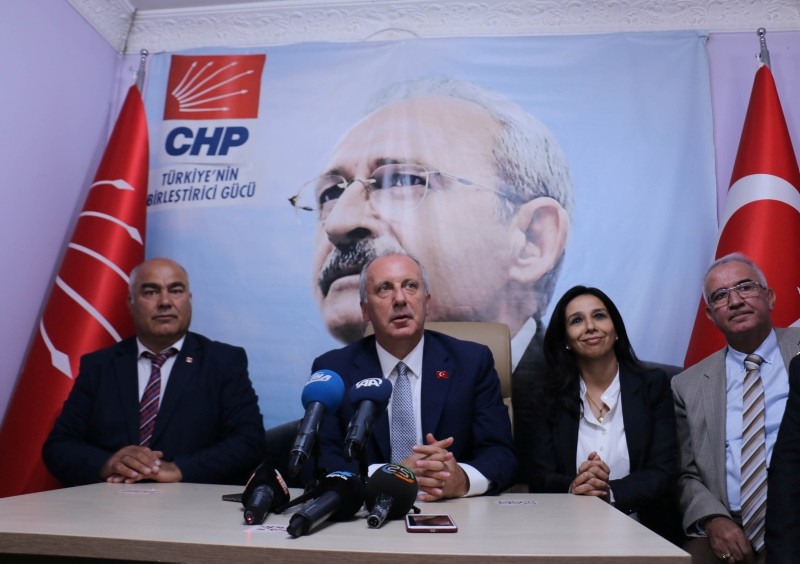 Muharrem Ince, the presidential candidate of the main opposition Republican People's Party (CHP) in the June 24 elections, continued his thinly-veiled criticism of Chairman Kemal Kılıçdaroğlu on Wednesday while signaling an active period in the aftermath of the elections which concluded with incumbent President Recep Tayyip Erdoğan and its ruling Justice and Development Party's (AK Party) victory.

Ince started his countrywide tour to thank all electorates from eastern province of Erzurum, a traditionally conservative region where Ince received 9.9 percent of the votes, compared to the CHP's 4.4 percent.

The nationwide performance of Ince also overshadowed that of the CHP's, as he received 30.6 percent of the votes in the presidential election compared to the CHP's 22.6 percent in the parliamentary vote. This situation reignited the leadership debate in the CHP with calls demanding Kılıçdaroğlu, who has lost in all elections since he took up the chairmanship role in 2011, to step down.

During his visit to the CHP's provincial headquarters, Ince announced that he will launch a membership campaign targeting the youth from Erzurum, where he could not visit during his energetic campaign that saw 107 rallies in 51 days.

Regarding the leadership debate, Ince said that there is no chaos in the CHP, and that he has a brotherly relationship with Kılıçdaroğlu. However, he went on to say that the CHP lost the most recent elections and there are no excuses for this.

"Those who refuse that they have lost cannot win. If you lose, you retreat, and then make your preparations [for the next], you do not make excuses," he said, in words both attributed to Kılıçdaroğlu.

The two were involved in a media debate on Tuesday as Ince revealed to reporters that he suggested to Kılıçdaroğlu to call for a leadership congress in which Ince would run as the chairmanship candidate and Kılıçdaroğlu would be declared honorary chairman. Saying that this offer was made in a private dinner between the two on Monday, Kılıçdaroğlu described Ince's comments as "political impoliteness," while the CHP administration also criticized Ince, who hit back earlier Wednesday saying he had "no secret agenda."

In an interview with Turkish daily Hürriyet, Kılıçdaroğlu ruled out an extraordinary congress and claimed the CHP was successful in the elections, despite a three percent drop in the party's votes from 25.3 percent in the Nov. 2015 elections.

Despite Kılıçdaroğlu's rejection, several party delegates and provincial administration members have voiced support for a congress. A notable call came Wednesday from Izmir Metropolitan Mayor Aziz Kocaoğlu, who has been in the position since 2004 in Turkey's third largest city dubbed as the CHP's "fortress." In a short statement, Kocaoğlu said the June 24 elections made urgent a change in the CHP mandatory and that this was the demand of the overall public opinion and party support base. "This change taking place with the pioneership of our chairman would greatly enforce our party," Kocaoğlu said.

However, since Kılıçdaroğlu is dominant over the party organization and the delegates, it is highly unlikely that Ince and his supporters will push for a leadership congress against Kılıçdaroğlu's will. Before being nominated by the CHP administration to run as the party's presidential candidate, Ince unsuccessfully ran twice against Kılıçdaroğlu in party congresses in 2014 and 2018. In the 2014 congress, 740 delegates voted for Kılıçdaroğlu while Ince received the backing of 415 delegates. In 2018, 790 delegates voted for Kılıçdaroğlu, while İnce received only 447 votes. Ince's supporters have been criticizing Kılıçdaroğlu for piling up the party with delegates who are close to him. Currently, there are 1,276 delegates in the CHP, and a chairman candidate needs the backing of that least one-tenth of the delegates in order to run in a congress. Moreover, Ince would need the support of at least 650 delegates to push for a leadership congress according to the party's bylaws, a number unlikely to be reached if Kılıçdaroğlu blocks such a move.

Here, Ince said that he will be a candidate in the upcoming presidential elections. "Politics is a long-running business. No one can guarantee whether the next presidential elections will be held in 5 years, maybe it will take place within 2 years. That's what we have to be prepared for."