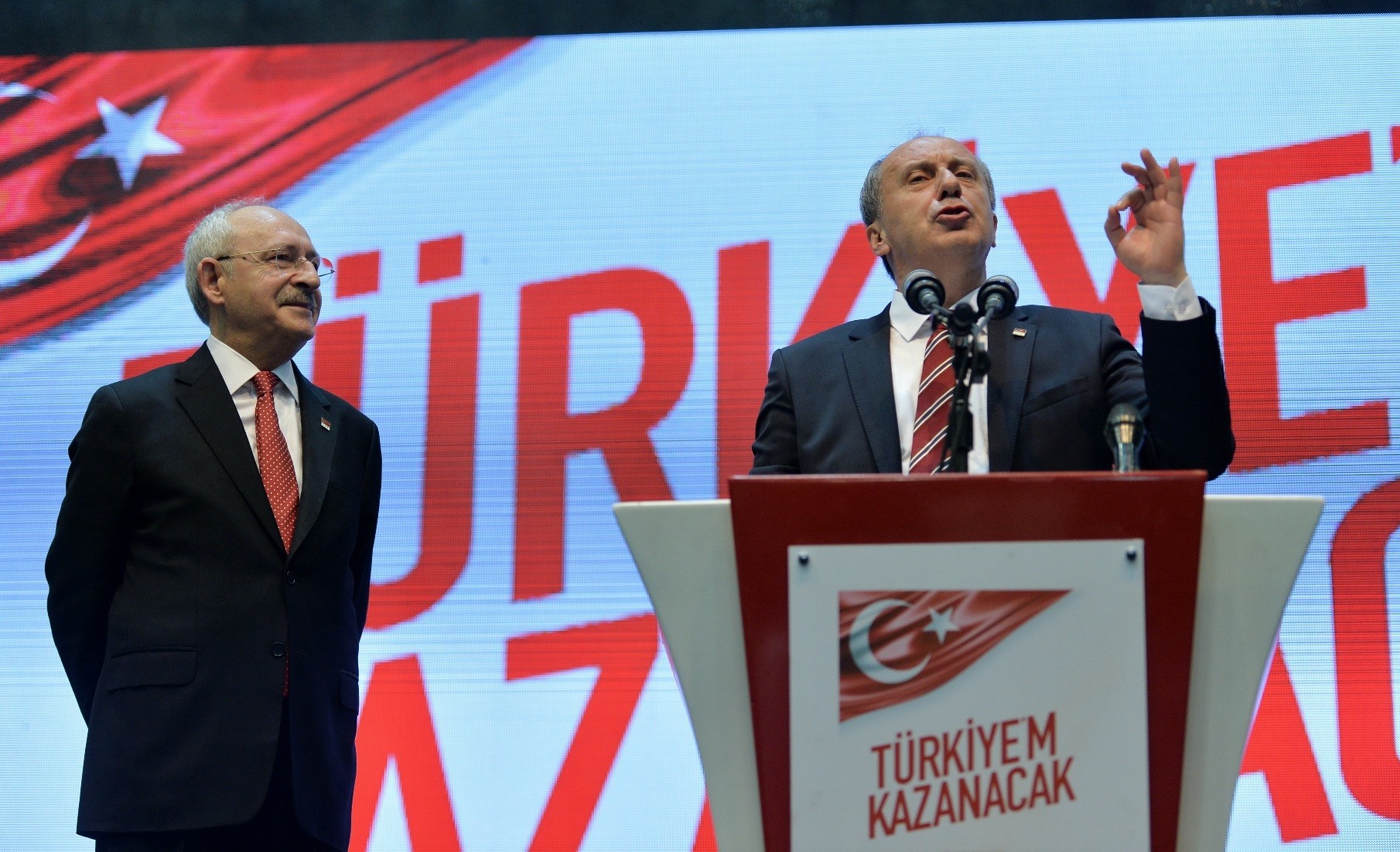 Muharrem İnce, the Republican People's Party (CHP) presidential candidate for the June 24 elections, has once again voiced his intention to lead the party. İnce said on Tuesday that he had suggested to the incumbent Chairman Kemal Kılıçdaroğlu to call for an extraordinary congress. Experts interpret İnce's call to Kılıçdaroğlu simply as a "move aside" call, after repeated failures, built on support he received during the presidential race, which was higher than the support the party received in the parliamentary elections. "İnce's statements mean that İnce kindly asked Kılıçdaroğlu to move aside," Şahin Mengü, a former CHP deputy and a renowned figure within the party, told Daily Sabah yesterday.

İnce's remarks yesterday come after the two politicians met in Ankara on Monday evening to hold a meeting in the aftermath of the June 24 elections, in which incumbent President Recep Tayyip Erdoğan and his ruling Justice and Development Party (AK Party) emerged victorious with 52.6 and 42.6 of the votes, respectively. The People Alliance, which consisted of the AK Party and the Nationalist Movement Party (MHP), secured a comfortable majority in the Parliament with 53.7 percent of the vote.

Meanwhile, the CHP became caught in a leadership debate as İnce received 30.6 percent of the votes, 8 percentage point more than the CHP.

Mengü said that the call for congress by İnce shows that the bridges between İnce and Kılıçdaroğlu were burned, while adding that it is the CHP's deputies who would decide whether there would be a congress or not.

İnce told reporters at the Parliament yesterday, where he was to terminate his role as a deputy after 16 years, that he won't run against Kılıçdaroğlu, who beat him twice in congresses in 2014 and 2018.

However, he added that he offered Kılıçdaroğlu an honorary party chairmanship position, and that he could be the chairman of the party.

"I told the chairman that he acted like a statesman by nominating [for presidency] someone who ran against him and sending 15 deputies to the Good Party (İP) [to secure participation in the elections]; that he has been enshrined in the people's hearts and that it must continue; that I don't want to be in competition with him but the nation has hope and we must not lose this; and offered him that if he wishes to, he can call for an extraordinary congress by himself, and I can be the chairman and he can be the honorary chairman," İnce said.

Tanju Tosun, an academic from Ege University told Daily Sabah that, "It is unprofessional that these discussions are made in front of the public. It will cause loss of respect for the party's institutional identity. The CHP supporters would not welcome this."

Kılıçdaroğlu, in his first remark after İnce's statement, described his words as "political impoliteness," saying it was a private matter between the two and İnce's move was out of political etiquette.

Referring to his offer of honorary party chairman during their Monday evening meeting, İnce said that Kılıçdaroğlu did not say "yes or no."

"If Kılıçdaroğlu says no to my offer then the party organization will solve this on its own. I won't be collecting signatures [for a congress]," he added.

The CHP's deputy Chairman Bülent Tezcan stated yesterday that, "an extraordinary congress is not on the agenda of the CHP and its party chairman." Tezcan added that the party's Central Executive Board (MYK) which did not convene on Monday, and will meet tomorrow.

Referring to the upcoming local elections, Tezcan also stated that it would not be possible to prepare efficiently for the elections if there were intraparty rivalries.

In relation to the implications of the intraparty debates, Tosun added that İnce and Kılıçdaroğlu should not have these debates in front of the public and should have made an analysis of the elections for the benefit of the CHP.

Tomorrow, İnce is set to visit Kırklareli where he obtained the highest percent of his votes in the elections. İnce is expected to visit the party's provincial heads and later meet with the public to convey the message that he will continue his efforts.