As dissent within CHP gets louder, leadership becomes harder of hearing 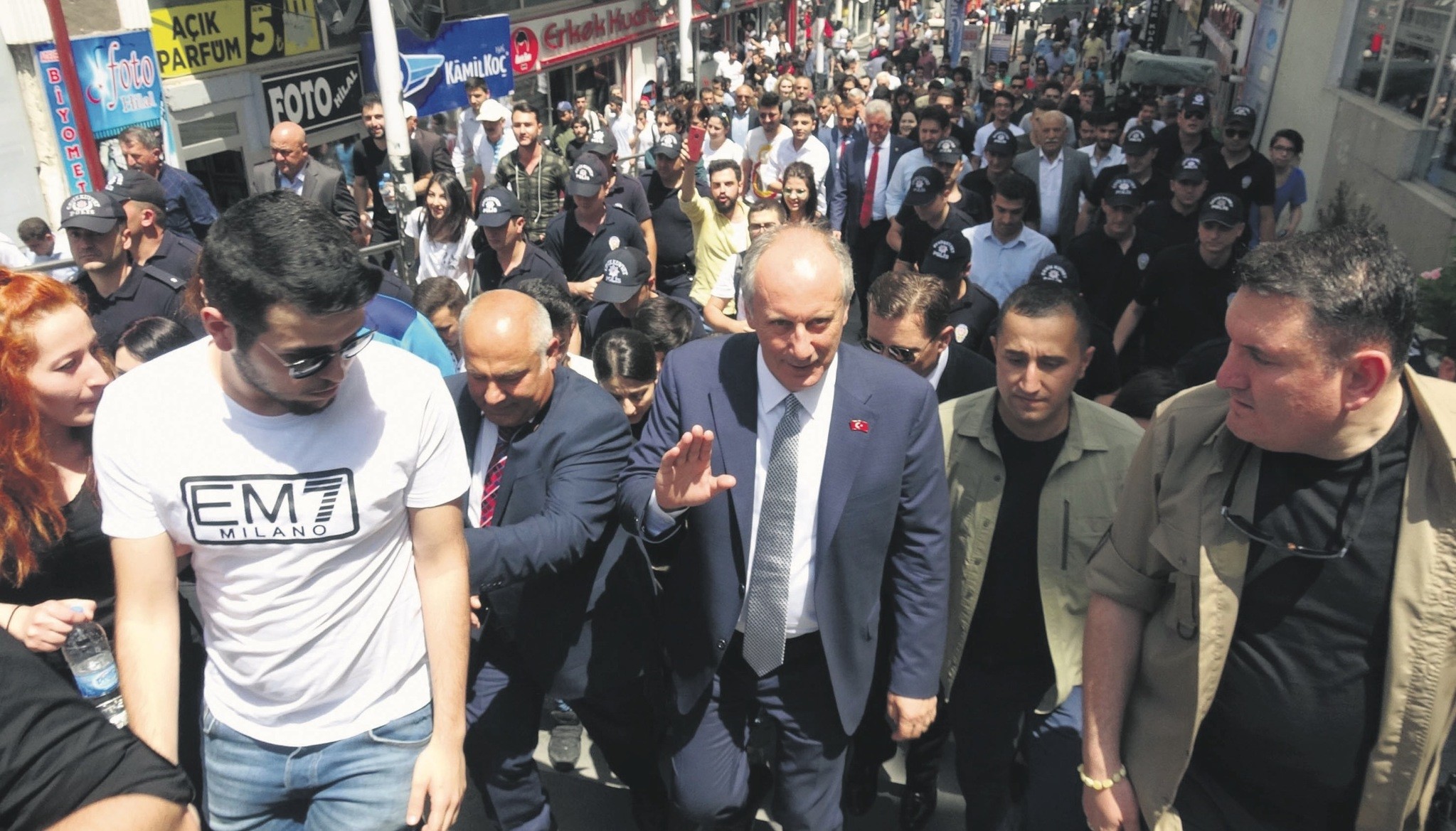 In the wake of the CHPu2019s defeat in the June 24 elections, Muharrem u0130nce (center) voiced his intention to run for party chairmanship, building on the support he gained during the presidential race.
by daily sabah
Jul 06, 2018 12:00 am

Dissidents within the main opposition Republican People's Party (CHP) continue to voice their intraparty criticism louder day by day as the party administration is failing to contain the growing frustration. Yesterday, CHP spokesperson Bülent Tezcan said that the party would not hold an extraordinary convention despite defeated presidential candidate Muharrem İnce's call to Chairman Kemal Kılıçdaroğlu to do so, following his ninth election loss in a row.

Addressing a press conference following the party's Central Executive Board (MYK) meeting in Ankara, Tezcan said, "There is no extraordinary convention on our agenda. Yes, these issues were discussed and evaluated. The extraordinary convention call is not on the agenda of our chairman and MYK." Responding to Tezcan's statements, İnce said yesterday that there is support for him in 30 provinces across the country. "I do not respond to intraparty matters through the press. Supporting statements have been made so far from 30 provinces," he said. The CHP spokesperson also said that there seems to be no need for the party to call for an extraordinary convention in light of the June 24 election results.

"All the results can be evaluated within the framework of the elections, but it is not a picture that will require a convention. It is not right to separately interpret the results of the elections," Tezcan said, referring to criticism that İnce garnered millions of more votes than the CHP.

"During this process our chairman, presidential candidate, deputies and organizations have moved toward one common goal," he stressed, adding that debates in regards to a possible extraordinary convention "are obstructive to the healthy evaluation of election results."

"An objective evaluation can be done separately from the internal power struggle within the party. There will be local elections in nine months. The convention will be held on time," he said.

Commenting on İnce's suggestion to Kılıçdaroğlu that he should be the chairman and Kılıçdaroğlu should take the honorary chairmanship position, he said, "There is no need for another blessing for the chairman. He does not need anything under this or that name or some kind of chairmanship."

Some of the CHP's young delegates, including Sinan Çiftçi, Mehmet Emin Altunses, Burak Esen, Hilal Çokoy and Aylin Ayyıldız, have recently submitted their signatures for an extraordinary convention demanding that İnce should become the party chairman.

Furthermore, Tezcan harshly criticized İnce for releasing details regarding his dinner with Kılıçdaroğlu. "It is not a decent attitude that does not comply with political courtesy standards to serve what was told in an exclusive dinner with wives attending," he said.

The CHP has been reeling under an intraparty squabble between İnce and Kılıçdaroğlu since the June 24 elections. In the wake of the results of the June 24 parliamentary and presidential elections, İnce voiced his intention to run for chairmanship of the party, building on the support he gained during the presidential race, which was 8 percent ahead of the party itself.

İnce had received about 30 percent against his main rival, the incumbent President Recep Tayyip Erdoğan, who won the elections with 52.6 percent of the vote. CHP had garnered only about 22 percent.

İnce's ambitions to be the leader of the main opposition party are not new. The now-former Yalova deputy of CHP had run twice against Kılıçdaroğlu, in 2014 and last February, and failed to gain enough support from party delegates both times.

Even though the party grassroots have grown frustrated with Kılıçdaroğlu's continuous failure as the CHP chairman, he seems unwilling to give up on his post despite losing against the Justice and Development Party (AK Party) and President Recep Tayyip Erdoğan nine times in a row.