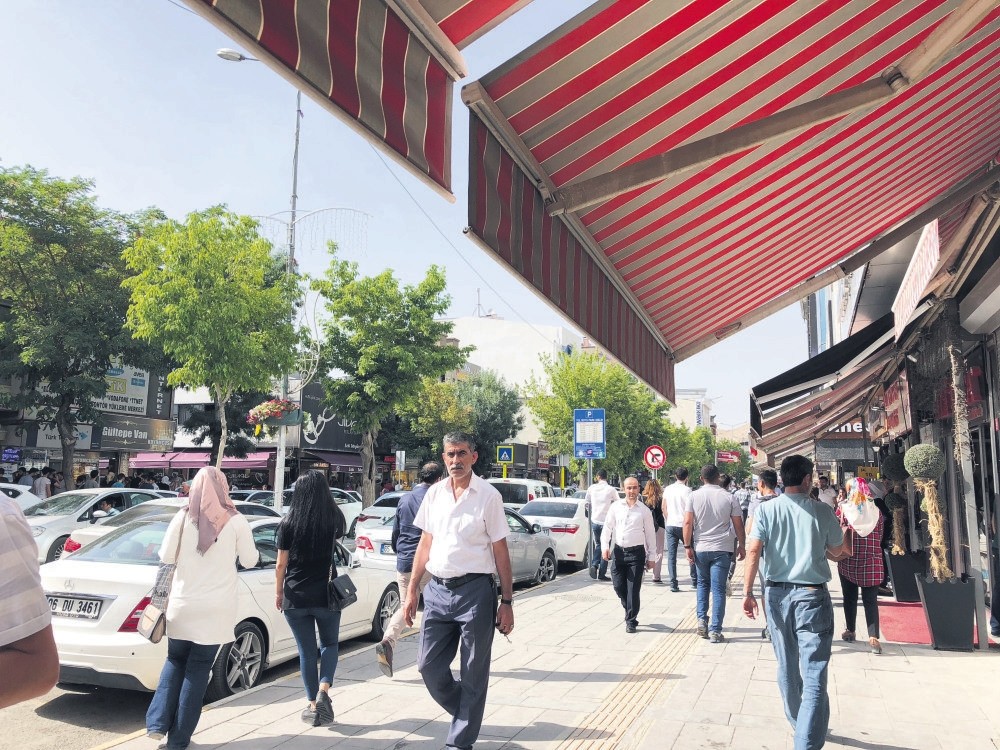 Although HDP lost significant support in eastern provinces in the recent elections, a million-strong Van bucks the trend since the party once again emerged as the leader with 60 percent support.
by Şeyma Nazlı Gürbüz, Ayşe Betül Bal
Jul 07, 2018 12:00 am

HDP supporters in Eastern provinces are struggling with a political dilemma: either to follow the historical ideological traps that usually lead them towards the HDP, or to vote for a more service-based policies that would benefit the region in the long run

The supporters of the Peoples' Democratic Party (HDP) in eastern Turkey are very disappointed by the party, with many arguing that their support is based mainly on their desire to see a Kurdish party in Parliament despite the party's obvious lack of skills or policies.

Some of the HDP leadership and some rank-and-file officials are in jail for links to the PKK. The PKK is recognized as a terrorist group by the EU and U.S. "The support of Kurds for the HDP is not about their parliamentary candidates' profile. It is about representing a certain identity," said Naif Yaşar, a pro-HDP local journalist of more than three decades from eastern Van province.

According to Yaşar, the perspective of local people on the HDP is "It [HDP] is bad, but there is no other alternative to it," since they are in search for and demand for Kurdish representation within the parliament. "The [HDP] parliamentarians do nothing for the provinces they represent," he added, noting that the HDP's co-chair and former member of Parliament from Van, Figen Yüksekdağ visited the province twice in four years.

The results of the recent parliamentary and presidential elections on June 24 showed that the people of east and southeast of Turkey, where Kurds form a majority, are tired of the HDP's destructive policies and would prefer if it focused on providing municipal services and policies that further their interests. While a substantial group in the region still supports the party, there were major decreases compared to past polls in votes across much of the region.

In the recent elections, the HDP lost significant support, coming a distant second against the ruling Justice and Development Party's (AK Party) 42.29 percent support, with 32.31 percent. In the eight of the 14 provinces in the east, the AK Party was the leading party while the HDP led in the rest.

One province that bucks the trend is a million-strong Van on the Iran border, where the HDP once again emerged as the leading party with 60 percent support, a drop of five percent compared to the Nov. 1, 2015 parliamentary elections. The AK Party's People's Alliance with the Nationalist Movement Party (MHP) received 34.08 percent of the votes. Five of the provinces' eight parliamentarians are from the HDP, and the rest are from the AK Party. In the presidential elections, Selahattin Demirtaş, the candidate of the HDP, received 58.38 percent of the votes while President Recep Tayyip Erdoğan, the candidate of the People's Alliance, received 35.43 percent of the votes.

Yaşar, who is an expert in the political dynamics of the region, said the feudal structure dominating much of the areas was of utmost importance. Unless you succeed in convincing the 12 tribes of the region, it is not possible to win any election in Van, Yaşar said.

According to pro-HDP Zozan Özgökçe, who is the head of the Van Woman Association, however, it is not surprising to see women on the front when it comes to politics, since it is common not only for the HDP but also other parties to base their political campaigns on women's activities. Two of Van's parliamentarians, both from the HDP, are women. In the Nov. 2015 elections, this number was three.

"The same situation is valid for the local municipality as well. As a matter of fact, I sometimes think that if the municipalities remained at the hands of the HDP, the votes of the HDP would go down half and half," Yaşar added. He was referring to the prosecution and removal of scores of BDP mayors for negligence, support for the PKK and other crimes, and their replacement by state officials.

A trustee who was appointed by the state to Van is actually seen as somewhat successful in his works in the province, especially compared to the previous head of the municipality who was from the BDP. Yet, despite his services, the public has mixed feelings against the trustee since he is also seen as the representative of the state and its power over the province.

Slipping support for the HDP becomes more apparent as one moves toward more conservative provinces, such as Bingöl, on the western side of Lake Van.

In smaller and more conservative eastern provinces like Bingöl, which has a population of around 350,000 the HDP could not manage to hold its power as it did in Van. As a matter of fact, the party has lost the majority of its support in the province slowly but gradually in each election.

"The reason why HDP keeps losing support in Bingöl is that they continue their wrong policy with certain ideologies and try to impose this upon us," said Cevdet Atalay, a 35-year-old local tradesman, who runs two local stores on the main avenue of Bingöl's city center.

According to Atalay, things are different now when compared to the recent past. Nowadays, people not only vote for their own interests but also vote for the whole country, choosing the option that would serve the country and in particular, the local community best. "What I expect from a political party that represents me is to service this country as well as the peace they bring into the region. It seems to me that HDP lacks both," said Atalay.

Another reason why locals are hesitant to support HDP in Bingöl, along with the fact that the majority of the Bingöl population is conservative and thus distances themselves from a party that has Marxist fundamentals, is that they prioritize their local and national interests over narrow ethnic ones.

Neşet Özdeş, a 55-year-old tradesman who has a carpet store in Bingöl city center said, "The most important things for me are justice and the integrity of my country. If there is unrest in Ankara today, it effects not only people living there but also affects me and my family. It's the same for all cities from Istanbul to Diyarbakır."

Özdeş expressed that this is why he does not want the eastern region to be separated from the west of the country and thus does not want to support policies that could ultimately lead to this. "In today's world that is getting smaller each day, why should I want to be separated? What I want is peace, proper municipality services, and above all justice," he added.

Still, there are some who believe ethnicity trumps national interests. Local businessman Ömer Güçin said, "Today, HDP is the only party that would express the problems of Kurdish people here. But they cannot accomplish this by being focused on an extremely narrow point of view. Unless the HDP changes its rhetoric and tries to be a part of Turkey's political spectrum, it will not be able to fully represent the local community; on the contrary it will further disappoint us."

Güçin further highlighted that for him, an ideology is not as important as the promises the political parties gave during the election campaign and whether or not they keep their promises. "Each time I go to the polls I consider those promises and think of what would they accomplish for the city that I live in and for my country," he said.

The economy seems to be the biggest problem for both provinces, regardless of their political affiliations. "In the 1990's, we had sugar, milk, meat, bait and show factories. However, in the last few years, all of these were either shut down or privatized. Yet, these factories were the investments that provided job opportunities to the locals. We need investments like these right now," said Mesut Öztürk, a businessman and former Van mayor.

Unemployment is a major reflection of economic difficulties on the locals of Bingöl as well. Especially young people who graduated from university and are in desperate need of jobs relying mostly on state investment. A 21-year-old pathology graduate Eymen Baylaz said, "What's important for me is the employment policies of the government. And I did not encounter such a promise during the election campaigns." Like Baylaz, 32-year-old Ali Çakar who has a small telephone store, drew attention to the unemployment rate which is 10.8 percent in the city. Along with the employment issue, Çakar had also highlighted the significance of services in the city. Saying that nearby cities have more opportunities than Bingöl, Çakar emphasized, "The party that I vote for should serve my city just as they do in the other cities. Unfortunately we do not see equal service in Bingöl."

However, other than the unemployment, Bingöl is actually content with investments the government made in the region and the projects which aim to reconstruct and develop the provinces, so much that their voting preferences were highly affected. Emphasizing that quality of life has been decreasing for the last ten years, Abdurrezzak Toplusoy, 38, the representative of the platform of Imam Hatip high schools, said, "I have been traveling the cities of Turkey for a long time. Today, thanks to what AK Party government had accomplished during its 16-year rule, there is not a huge difference between the cities in the West and the East. When I was a child, Bingöl was like a village. Most of the houses here lacked basic needs. Today, I believe, people consider such things when they go to the polls instead of ideologically voting for any party."

The region is gradually breaking the hold of the HDP domination, with many waiting for the government to continue with its previous reforms to switch its loyalties to the AK Party.

Toplusoy said, "The government had come a long way with its Kurdish policy. There was not a single roadside sign that reads Kurdish, back then. Today, there are Kurdish institutes in some of our universities. Students can take optional Kurdish classes. But these services weren't exactly explained to the public. That's the point where the government had failed. They should be more explanatory on what they did for us, for Kurdish people, because these examples were the first in modern Turkish history."

The reforms implemented by the AK Party over the years had widespread support from the region, many locals say, with many calling for their continuation.

Özgökçe, meanwhile said, "For instance, my name, Zozan, is a name that is used within the Kurdish society as commonly as Turks use the names Ayşe or Fatma. However, I don't see my name, or any other Kurdish name, in any children's school books, which tells a lot," she said.