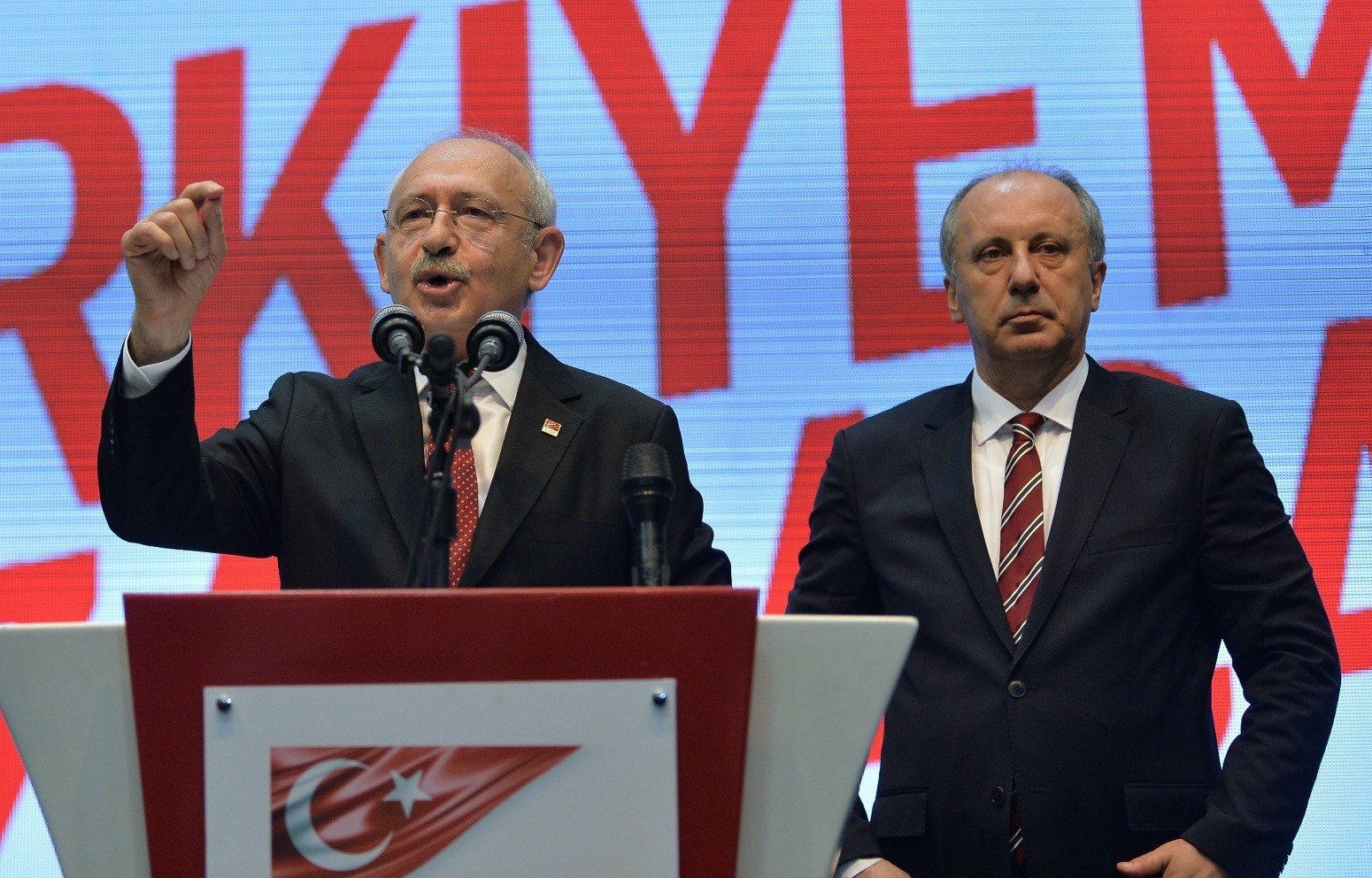 Over 450 signatures of CHP deputies, who support Muharrem İnce, have been collected, out of the 634 needed to call for an extraordinary convention, as dissent grows within party with cries for party Chairman Kemal Kılıçdaroğlu to step down

In order to convene an extraordinary congress and hold elections for chairmanship, the number of delegate signatures collected yesterday within the main opposition Republican People's Party (CHP) surpassed 450. Speaking to İhlas News Agency (İHA) yesterday, CHP's Bilecik deputy Yaşar Tüzün said that they surpassed the required two-third quorum and they have collected more than the required number of signatures to convene. Tüzün was just one of the party members that called on Monday for the signatures of delegates.

He had announced that the name of the convention to be the "convention of hope and change."

The party's Deputy Chairman Tuncay Özkan said, however, that only 120 signatures have been collected so far for an extraordinary convention. He added that he doesn't think it's right to have these kinds of debates ahead of the local elections.

"Following the local elections, the convention may gather in an ordinary way and decide to make a change. This would be the decision of our delegates," Özkan said.

Adding that he found the policies of Chairman Kemal Kılıçdaroğlu during and after the elections acceptable, he said that the CHP has a strategic electorate and considering the percentage of their votes, he does not consider the defeat catastrophic enough for the party to consider it an emergency situation.

After the June 24 parliamentary and presidential elections, Muharrem İnce, who ran twice against Chairman Kemal Kılıçdaroğlu for party chairmanship but lost, once again voiced his intention to run for the party's top post. He is trying to carry the momentum he gained during the presidential race, which he lost, but was 8 percentage points ahead of the party itself.

The gap between the votes for İnce and the CHP sparked debates within the party as some party members and supporters called on Kılıçdaroğlu, whom they see as responsible for repeated election failures, to step down.

According to CHP bylaws, 634 supporters have to submit their signatures to headquarters within 15 days after the process officially started on Monday. If this happens, the CHP is obliged to hold an extraordinary convention within 45 days.

Across Turkey, CHP members are continuing to deliver their support for an extraordinary convention. Convention delegate from Kayseri, Gonca Yelda Orhan said that she wishes to see İnce as the chairman of the party. She also said that they were aiming to reach about 700 to 750 signatures.

Following intraparty debates, yesterday, members supporting İnce called out to delegates for signatures across Turkey in order to be able to hold an extraordinary convention. The supporters have been stressing, that because of the current policies of the CHP, the party has failed to make progress and present itself as an effective opposition to the ruling Justice and Development Party (AK Party).

Meanwhile, İnce wrote on his Twitter account that he accepted the defeat in the election and he did all he could do to win. In the tweet, addressed to his young supporters, İnce also said a "long marathon" was ahead and that it was time "to prepare together for it." It is not clear on the tweet whether he used the word "marathon" as a metaphor referring to his race for party chairmanship.

Nevzat Kavalar, former CHP head of Bornova district, said that in İzmir they expect the signatures of 30 delegates, out of 52, to be submitted, adding that some members are currently on their holidays and will return to the province.

He further said, "We don't have any concerns; delegates keep on coming to submit signatures."

The relations between İnce and Kılıçdarıoğlu were strained when İnce announced to media that he had suggested to the incumbent Chairman Kılıçdaroğlu to call for an extraordinary convention. However, he added that he offered Kılıçdaroğlu an honorary party chairmanship position, and that he could be the chairman of the party. Kılıçdaroğlu, in his remarks after İnce's statement, described his words as "political impoliteness," saying it was a private matter between the two and İnce's move was out of the norm in terms of political etiquette. Following the row, İnce supporters moved to replace the party's chairman.