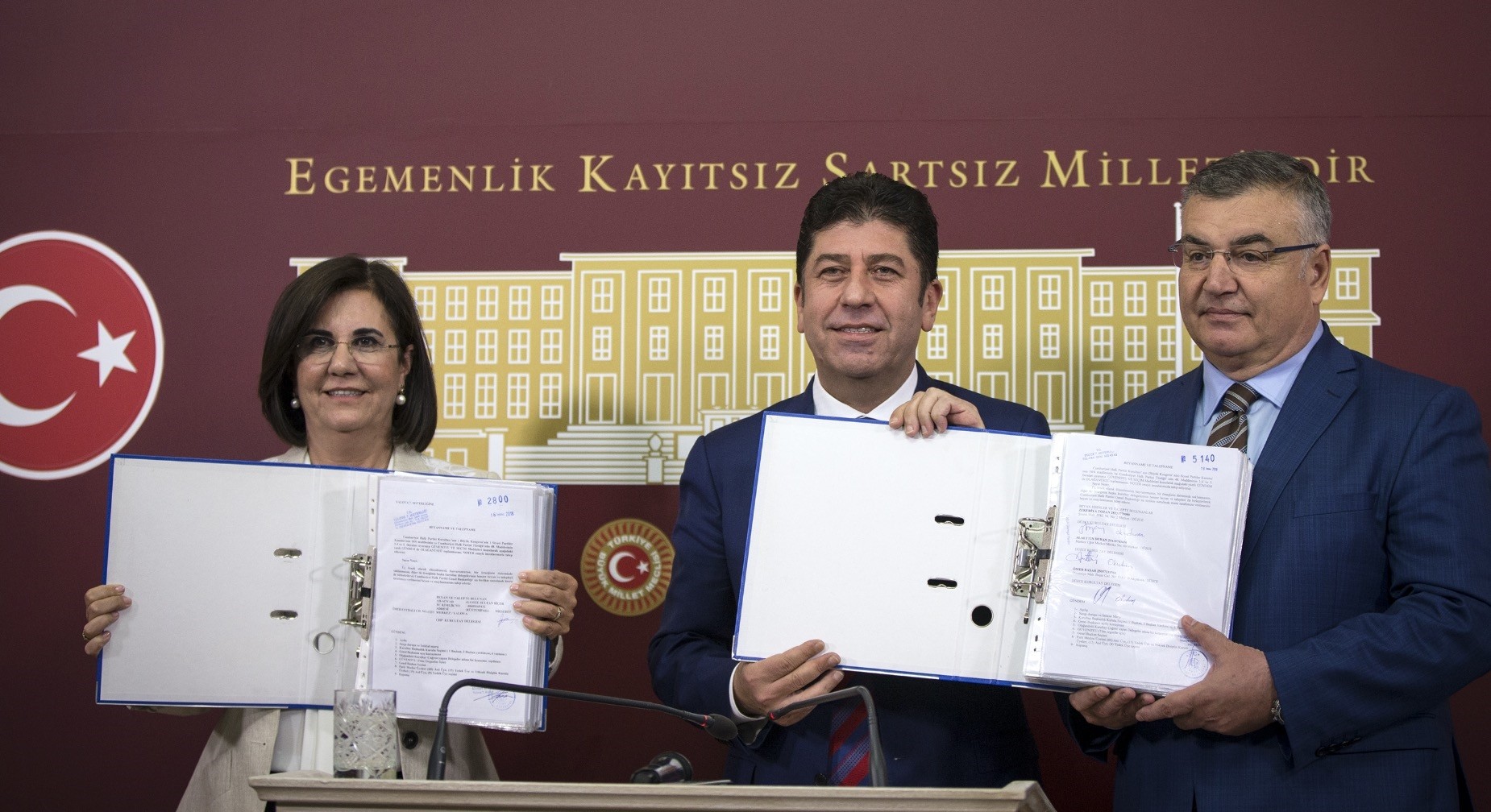 An orderly house seems like a distant dream for the main opposition Republican People's Party (CHP) as the administration and the dissident camp continue to fight over the number of signatures needed for an extraordinary convention.

The intraparty fight was carried to a whole new level yesterday after the party's administration responded to reports that the dissident front had gathered more than 500 signatures, just 100 shy of the number needed to call an extraordinary convention.

Addressing a press conference, CHP Deputy Chairman Tuncay Özkan said: "It is the right of every CHP member to request a convention. If there are enough signatures, I kindly call on them to come on in, then we will do whatever is necessary."

Criticizing the dissident camp for inciting unease within the party, the CHP deputy chairman said: "If there are enough signatures, then it does not make sense for this process to unsettle the CHP's base. What is important in this process is to protect the CHP's balance and its power. There is no point in turning the situation into a media war with these statements," said Özkan as he urged all CHP members to work for the March 2019 local elections rather than fight over the number of signatures.

"We have almost reached the quorum needed for an extraordinary convention," CHP Bilecik Deputy Yaşar Tüzün said Wednesday in a press meeting at Parliament.

He claimed they have collected 526 signatures and hoped to reach the necessary number over the next couple of days. "We are going to reach the required number no later than tomorrow or by the end of the week," he added.

According to the CHP's bylaws, 634 delegates must submit their signatures to party headquarters within 15 days after the process officially started, which was Monday. If this happens, the CHP is obliged to hold an extraordinary convention within 45 days.

Releasing his resignation in a statement, Oktay mentioned his support for change in the party and a strong will for the convention to happen. "We should respond to the people's request for the CHP to change and strengthen our fight for democracy," he said.

In his statement, Oktay also stressed that the world witnessed a democratic victory on the night of June 24. "However, because of the representation crisis, a rising expectation from all parts of society to change and revitalize our party has surfaced. Meeting this expectation should be our principle mission," he added.

Another chief adviser of Kılıçdaroğlu, Ali Arif Özzeybek, also resigned from his position and the party last week saying "deepening ideological differences and disappointments with the party leadership" was the main reason behind his decision.

Another prominent opposition figure, CHP's İzmir deputy Selin Sayek Böke, in a statement on her Twitter account Wednesday declared an open invitation for an extraordinary convention and called for "comprehensive change," urging CHP delegates to submit their signatures.

A group named "Us for the Future," which includes other prominent party figures like İlhan Cihaner and Ali Şeker, also called for "comprehensive change" in a statement yesterday.

Meanwhile, an increasing number of deputies are urging CHP delegates to submit their signatures for an extraordinary convention to change the party's leadership.

Muharrem İnce, the party's presidential candidate who was defeated by President Recep Tayyip Erdoğan, is reportedly favored by the dissidents to be the man to replace Kılıçdaroğlu.

The flames of the bitter feud over CHP leadership were fanned with the results of the June 24 elections. İnce, who received 30 percent of the vote, openly challenged the party's chairman and offered him an honorary chairman position.

Since İnce has boldly proclaimed his push for change in the CHP, deputies supporting him moved to submit signatures to hold an extraordinary convention and elect İnce as the new chairman.

As the debates over leadership rock the CHP, Erdal Aksünger, a member of the CHP's party assembly, said Wednesday that there were trust issues between the CHP and the public. He added that "it was impossible for these cadres to overcome the trust problem" and "a significant change was much needed." Aksünger also identified the expelling of people from the party and avoiding a convention to keep some in their posts as serious problems.