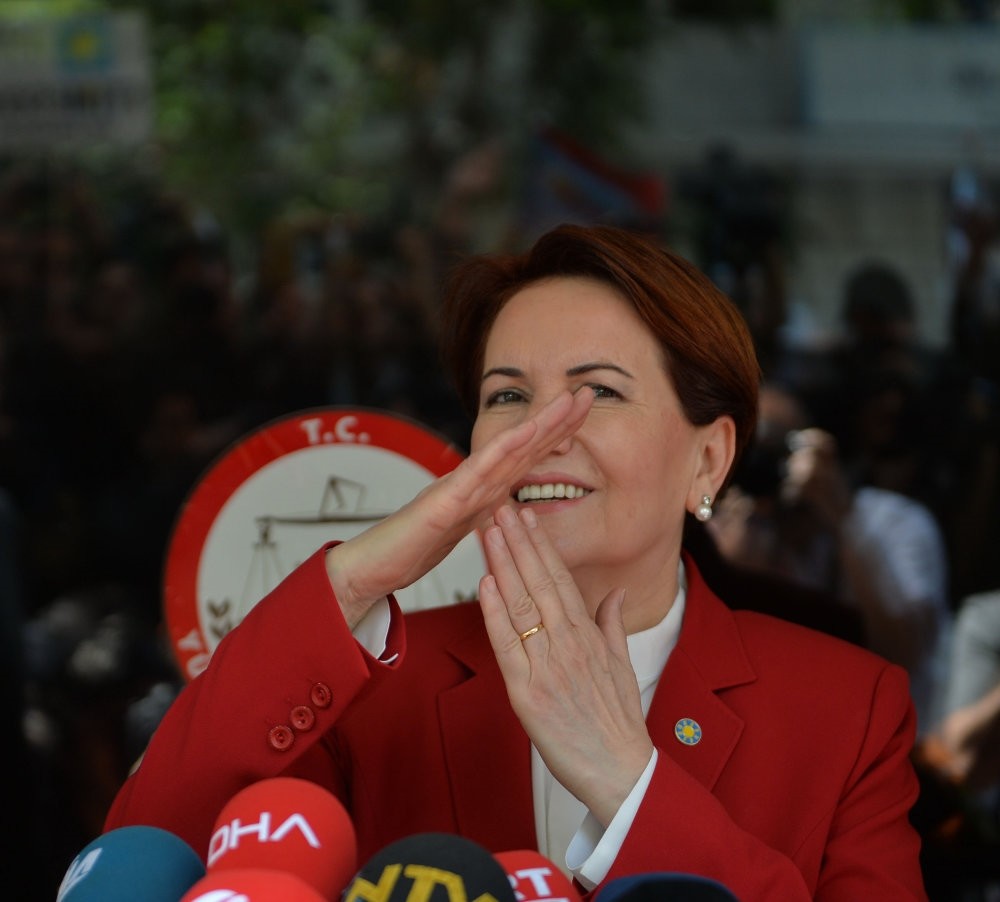 In the presidential election on June 24, Aku015fener could only gather some 7 percent of votes, staying well below the hype created home and abroad. Her party, on the other hand, received around 9.95 percent of the votes in the parliamentary elections.
by Yunus Paksoy
Jul 24, 2018 12:00 am

"I will become the prime minister," Meral Akşener repeatedly asserted two years ago. Waging a political battle against the Nationalist Movement Party (MHP) Chairman Devlet Bahçeli at the time, Akşener sought to overthrow him to be crowned the first chairwoman of the nationalist party. However, she fizzled quickly. In fact, this is what caused Akşener to pursue her political career at a new party and the far-right Good Party (İP) came into existence in October 2017. The founding chairwoman of the İP had embarked on a new adventure.

She traveled all over Turkey with the aim of challenging President Recep Tayyip Erdoğan in the election.

After the November 2019 parliamentary and presidential elections were brought forward to June 24, a glimpse of hope appeared for Akşener. In the June 24 elections, she was overwhelmed with the dream of moving into the presidential office. At the end of the day, this time it was the presidency at stake, not the prime ministry.

For the Western media, Akşener was "the she-wolf" that would put Erdoğan in a tough spot. According to them, she was a genuine contender to put an end to the president's tenure. However, things did not turn out as they expected.

On June 24, Akşener could only gather some 7 percent of the votes, staying well below the hype created home and abroad. Her party, on the other hand, was able to send deputies into Parliament thanks to the alliance formed with the main opposition Republican People's Party (CHP). It received around 9.95 percent of the votes.

According to Turkish laws whoever runs in the presidential elections cannot be a deputy at the same time. Therefore, those who lose the presidential race are left without a tangible political post. In Akşener's case, it was about keeping the grips of her own party in hand.

İP had already been reeling under the uneasiness of its founding members. Since the pre-election period until today, there have been scores of resignations across the country. An unraveling has long been observed within the far-right party. Over the weekend, though, things took an unprecedented turn.

The party has announced that an emergency convention would be held. More surprisingly, Akşener announced on Twitter that she would not seek re-election in the convention. The decision came after a consultative party camp in western Turkey. According to the reports, tension ran high during the meetings in Afyonkarahisar province to draw a new roadmap to prevent the dissolution of the party, with many blaming Akşener for the poor results.

From being the champion of millions of people in October, Akşener fell from grace within a short period of time. Her announcement shook Ankara to its core. First, İP Vice Chairman Koray Aydın, who is rumored to be the successor of Akşener, spoke out.

He said that some criticized the party leadership while some others expressed the support İP was able to gather was a success. "There is no one considering running for the party leadership. I don't think there is anyone [other than Akşener] would announce candidacy."

Zafer Şahin, Ankara bureau chief for the Turkish language daily, Takvim, that had predicted the convention decision days before, said the reins of the party are now in the hands of Aydın. "It seems like the disappointment by June 24 created a confidence crisis in Akşener. However, at this stage, the reins appear in the hands of Koray Aydın. Müsavat Dervişoğlu and Ümit Özdağ [who] also work behind the stages for the chairmanship," he said.

Indeed, with Akşener out of the equation, İP will find itself in search of a new chairperson. Even MHP Chairman Bahçeli expressed his opinion on the issue. He called on Aydın and other prominent İP figures to persuade Akşener for re-election.

Şahin underlined that Akşener's poor performance on June 24 - after very assertively claiming that she would become the prime minister, then the president - led to comments such as "this political movement was born dead."

In addition, the fact that some names, especially former Deputy Yusuf Halaçoğlu, were not included on the deputy list intensified the reactions. He argued that physical clashes took place at the camp over the weekend, which laid out the degree of uneasiness within the party.

Today, İP is at a crossroads. A political party that is barely a year old is embroiled in a crisis that could result in it dissolving altogether. There are a great number of people in Ankara that predict the party to team up with the MHP in Parliament. The party is, indeed, susceptible to its roots within the MHP. It experienced yet another crisis on the first day of the new parliamentary term after one İP deputy kissed Bahçeli's hands.

Whether Akşener will be convinced to return to the game remains unclear. But, because her spirited claim to the prime ministerial post and then the presidential seat ended in a loss of her party chair, she will be remembered as a candidate with one of the most disappointing runs in Turkish political history.