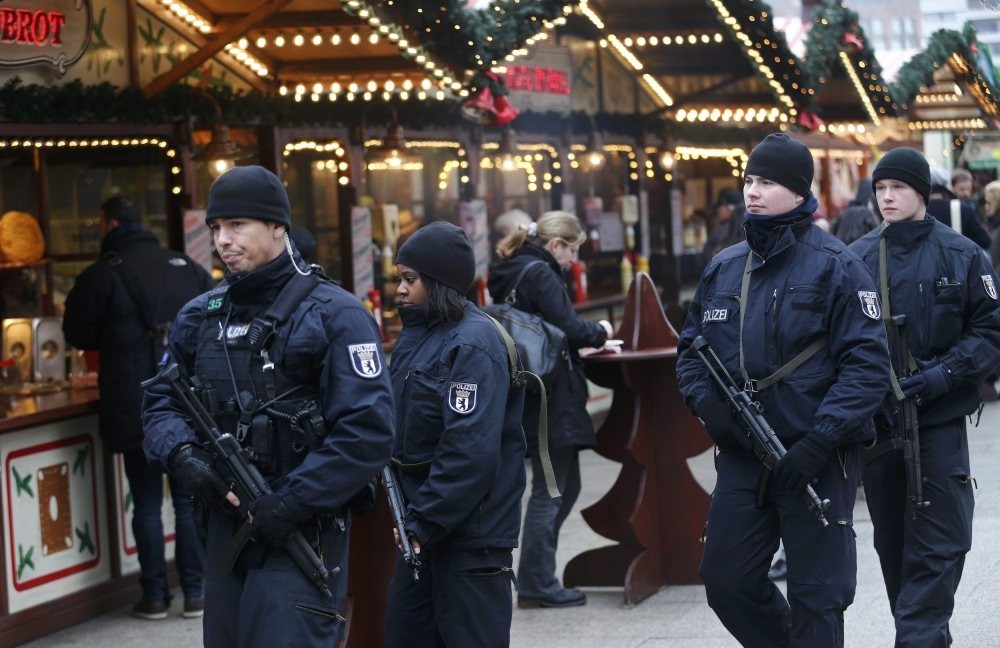 German police patrol Breitscheid square in Berlin, Germany on Dec. 22, 2016, three days after a deadly Daesh attack that killed 12 civilians. German authorities were harshly criticized at the time for their inefficiency in preventing the attack.
by Yunus Paksoy Jul 25, 2018 12:00 am

The ineffectiveness of the German state in its fight against Daesh was laid bare with the case of Jennifer W., a militant deported by Turkey, after German authorities have admitted that they let her walk freely on German streets for more than two years because they could not prove her links to the terrorist group

In August 2014, 27-year-old Jennifer W., a German citizen, made up her mind. In a bid to pursue a dream emanating from her world views, she made her way to Turkey with a legally obtained German passport. Exiting her country with a stamp by German police, she was cleared to travel to Turkey. However, she considered Turkey just as a stopover. Through Turkey, she snuck into Syria and then Iraq. As of September 2014, she had succeeded in her objective. She had joined Daesh.

In the wake of her recruitment in Iraq, Jennifer climbed up the ladder so fast that in a short span of time, she found herself a spot in the decision-making and command structure of the terrorist group. Having achieved a reputation within Daesh, Jennifer was assigned to Iraq's Fallujah and Mosul provinces. There she worked as a member of the morality police, making sure that the strict laws of the terrorist group were obeyed by the people. In areas of Syria and Iraq under Daesh rule, thousands of people have reportedly been tortured and killed for not obeying basic laws such as the public ban on smoking or failure to grow a beard. For women, it was even harder when the morality police forced them to get dressed in accordance with the codes defined by the terrorist group itself. Any slight error in complying with Daesh laws ended in violent punishments. Jennifer herself was the one who oversaw these.

She is believed to have been paid by the terrorist group between $70 and $100 per month. Toward the end of 2015, Jennifer decided to apply for a new passport from the German Embassy in Ankara, the Turkish capital. In January 2016, Jennifer was in Ankara, again with a valid German passport. However, by that time, Turkish security and intelligence units were following her. Upon leaving the German embassy complex, she was apprehended.

Shortly after, Jennifer was deported to Germany with the information that led to her detention by Turkish security forces.

However, once she was outside Turkey, she faced no legal consequences for her actions. German authorities opted to take no action against the extremist. She continued to act in accordance with the instructions provided by the terrorist group. She is reported to have acted as an administrator of a telegram chat group in which Daesh-affiliated people exchanged terrorism-related views. This women-only group consisted of more than 700 members and aimed to support imprisoned extremists and their families, German media reported.

Through such groups, Daesh succeeds in keeping the moral of the recruits high and collect donations. In some instances, hundreds of euros were gathered to help fellow militants quench their needs.

In spite of the actions of the extremist group, the question as to why German authorities have failed to react to the case of Jennifer W. looms. Given that Turkish security authorities deported the Daesh terrorist with information attached, she remained free on German streets until recently. Jennifer was finally arrested on June 29 in the Bavarian government district of Swabia. Her apartment in the district of Vechta in Lower Saxony was searched. Her case is, indeed, worth paying attention to. How could a dedicated Daesh terrorist in her mid-20s wander freely on German streets for two-and-a-half years? How could a deported terror suspect not face any action for such a long period of time?

Answering Daily Sabah's questions, a spokesperson for the German Federal Prosecutor's Office laid bare the ineffectiveness of the German judiciary and police department.

"We could not prove that Jennifer was an IS [the acronym used in Germany for Daesh] member for two years," the spokesperson said.

With the failure on the German side, the German embassy, which played a significant role in the sequence of the events, was questioned as well.

As the German Embassy in Ankara said outright that it had nothing to share with the press on the issue, several sides of the issue remain murky.

Some European and American officials had accused Turkey of failing to stem the flow of foreign fighters to Daesh, with some even claiming that the country was aiding and abetting the terrorist group.

However, Turkish officials openly criticized their European counterparts for failing to share intelligence, arguing that Turkish authorities could not legally detain citizens of European countries entering Turkey without a cause unless their countries of origin provided the information.

In fact, it is usually the Turkish side that collects the information, detains and extradites the suspect, before the country of origin deems it appropriate to release the militant.

The case of Jennifer W. is not the first time that Turkish security authorities deported a terror suspect and handed them over to other countries. On March 22, 2016, Brussels was hit by a terrorist attack that killed 35 people and injured more than 300. Afterward, President Recep Tayyip Erdoğan revealed that Turkey had previously deported one of the Brussels terror attackers and had notified Belgian authorities.

"The Belgian embassy was notified on July 14, 2015 about the deportation of the attacker, who was later released in Belgium" Erdoğan said.

Ankara has so far deported close to 6,000 Daesh suspects and around 3,500 foreign terrorists from 95 different countries, while more than 50,000 people have been banned from entering Turkey. Furthermore, the local network of the terrorist group has been cut down following the last Daesh attack on Dec. 31, 2016 at a night club in Istanbul that killed 39 people.

When all this is said and done, it seems that Germany was saved from a terrorist attack for two years, not because of their effective counterterrorism, but because Jennifer W. chose not to. It took until June 30 of this year for Jennifer W. to be charged for being a member of Daesh.

Reports say, 950 German nationals left the country to join Daesh in Iraq and Syria, and 300 of them have returned.