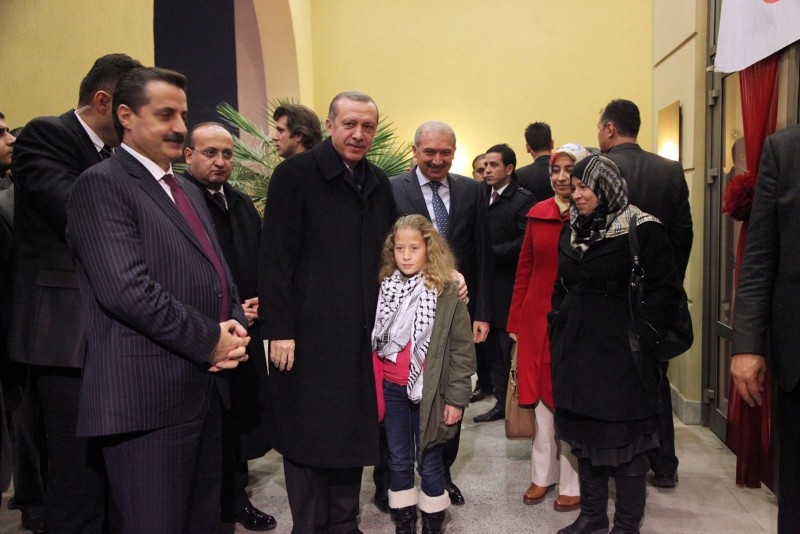 A file photo of President Recep Tayyip Erdou011fan and Palestinian teen Ahed Tamimi during his visit to u015eanlu0131urfa provice, Turkey.
by Daily Sabah with Agencies Jul 29, 2018 12:00 am

President Recep Tayyip Erdoğan congratulated Palestinian teen Ahed Tamimi on her release in a phone call, and lauded her bravery and determination to fight against the Israeli occupation.

Earlier, Tamimi and her mother were released by Israeli authorities after an eight-month-long detention.

Erdoğan praised her bravery and determination to fight, the source, who asked not to be named due to restrictions on speaking to the media, said.

Ahed's mother Nariman Tamimi was also with her on the phone when the president spoke, the source added.

Erdoğan assured the family that Turkey's support for Palestinian's just fight would continue.

In 2012, Ahed was awarded with the Hanzala Courage Award by Başakşehir Municipality in Istanbul for challenging the Israeli soldiers who had arrested her brother. At the time, then-Prime Minister Erdoğan and his wife met the Palestinian girl.

She was arrested by Israeli forces in December with an Israeli court slapping her with an 8-month detention in March for "attacking" an Israeli soldier.

Speaking for the first time since the end of her stint in the HaSharon prison in central Israel, the 17-year-old spoke outside her family's West Bank home, thronged by journalists. Tamimi called for ending Israel's decadeslong occupation and thanked all her supporters who stood by her and her family during her detention.

"We will continue the resistance to achieve the freedom of the Palestinian people," Tamimi told a press conference in the West Bank town of Nabi Saleh, west of Ramallah.

"We must boycott and isolate the [Israeli] occupation and put it on trial," she said.

"The power is with the people and the people can and will decide their destiny," she said.

Tamimi also said she plans to study law to "defend my people and the Palestinian cause."

During another news conference later in the day, Al-Tamimi said she wants to study law to defend the rights of her people and help Palestinians stuck in Israeli prisons. She added her release was bittersweet because there were other female prisoners in Israeli prisons who she left behind.

The Palestinian icon also brought a message from the female prisoners: "Work for the unity of Palestine, support Great March of Return protests in the Gaza Strip and back the resistance of people of Khan al-Ahmar," she said, referring to a Palestinian village in the occupied West Bank where locals face Israeli destruction.

On July 5, Israeli bulldozers destroyed a number of tents and other structures in Khan al-Ahmar, triggering clashes with local residents. There are 46 Bedouin communities scattered across Israeli-occupied East Jerusalem inhabited by some 3,000 residents.

The law defines Israel as a Jewish state with a "united Jerusalem" as its capital. It has also promoted Hebrew as the only official language, stripping Arabic as an official language while recognizing its "special status."

The new legislation risks further alienating the Arab minority who argue they already face discrimination from Israeli Jews and the government, and already feel as though they are second-class citizens.

On social media, Palestinians celebrated Tamimi as a hero in widely distributed cartoons. In one, she is shown in a Joan of Arc-like pose, raising a Palestinian flag, framed by her easily recognizable mane of dirty blonde curls. She has made headlines in the past, including in 2015, when she bit the hand of a masked Israeli soldier who was holding her now 14-year-old brother Mohammed in a chokehold during an attempted arrest.

Palestine's President Mahmoud Abbas on Sunday called Tamimi "a model of the Palestinian struggle for freedom, independence and statehood," according to Wafa, the official PA news agency.

Abbas said that the teenager is a "vital weapon" in nonviolent resistance to Israel's control over the West Bank.

Last week Bassem Tamimi said that his family is seeking "to continue normal life" and has stopped the weekly anti-occupation protests in Nabi Saleh where confrontations with Israeli soldiers are common. However, he added, sometimes "the occupation forces you to resist because there is no other way."