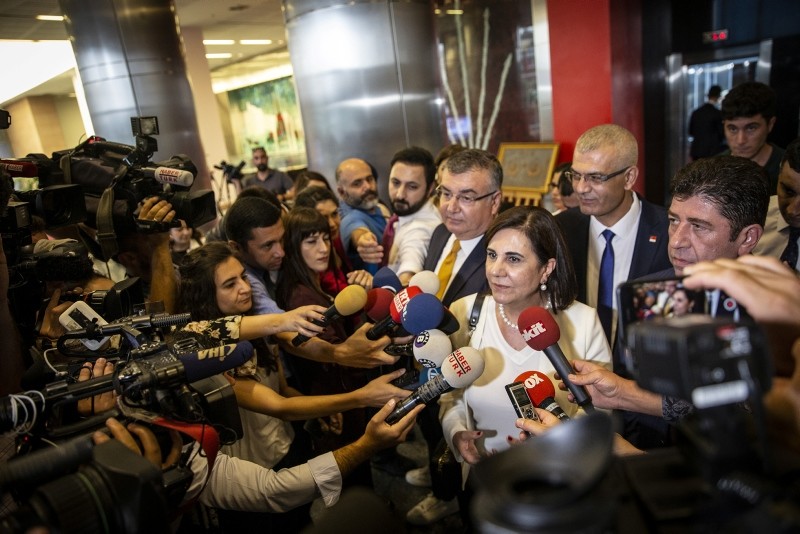 Gaye Usluer, a member of the CHP Party Assembly, answers reporters' questions outside the party's headquarters in Ankara. (AA Photo)
by Daily Sabah Aug 06, 2018 12:00 am

The examination process for the delegate signatures submitted by the dissidents within the main opposition Republican People's Party (CHP) to challenge Chairman Kemal Kılıçdaroğlu was completed Monday and the party administration said that the dissidents have failed to attain a sufficient level of support from party delegates.

The party administration said that "569 signatures were collected from dissidents and there would be no convention."

The number of signatures collected had become a main point of debate throughout the process, with Kılıçdaroğlu continuing to gloss over the demand by the dissidents for change.

Muharrem İnce, who the dissidents considered a natural leader of the party following his nomination as the presidential candidate in the June 24 elections, stated Sunday evening, "In the wake of recent developments, the CHP should stop waiting to convene the extraordinary convention even for a day. The decision to hold an extraordinary convention is no longer a matter of reaching the sufficient number of delegates or not."

Dissidents submitted the signatures of the delegates to the party administration on Aug. 2, following a deadline of a 15 day period to gather signatures, amid turmoil within the party. However, disputes have not quieted down since then.

Shortly after the submission of the signatures, CHP headquarters announced that the signatures did not reach the quorum even before they counted omitted signatures and withdrawn signatures by certain delegates, according to preliminary examinations.

Four repeated signatures and five signatures belonging to former delegates were omitted, leaving 605 signatures in total. The administration had been counting withdrawn signatures until yesterday.

Heated debates between the dissidents and the party administration have yet to settle down as a sit-down strike was organized in front of the party headquarters with successive statements made by both fractions.

Pointing to the overwhelming number of signatures, prominent dissident figures and İnce called on Kılıçdaroğlu to hold an extraordinary convention even if the signatures do not reach a quorum.

Commenting on the recent debates, CHP Vice President Veli Ağbaba indicated that "Regardless of the result, this process has seriously harmed the party. Even the Justice and Development Party (AK Party), the party in power had not harmed CHP this much. We have stewed in our own juice."

Meanwhile, Kılıçdaroğlu, who had been maintaining that the convention process will only harm the party and undermine preparations for the upcoming 2019 local elections, continues to turn a deaf ear to the voices of the dissidents demanding a change. Despite the dissidents' demands, CHP headquarters had agreed to make a clean break from the discussions around the extraordinary convention.

Changes in the Central Executive Board (MYK) and preparations for the upcoming elections seem to be at the top of Kılıçdaroğlu's agenda. Following the latest meeting of the current MYK on Wednesday, Kılıçdaroğlu is expected to change the positions of critical names within the MYK. Kılıçdaroğlu is hoping that these changes will attract more votes in the upcoming local elections, appease the dissidents' demands and help him keep his seat.