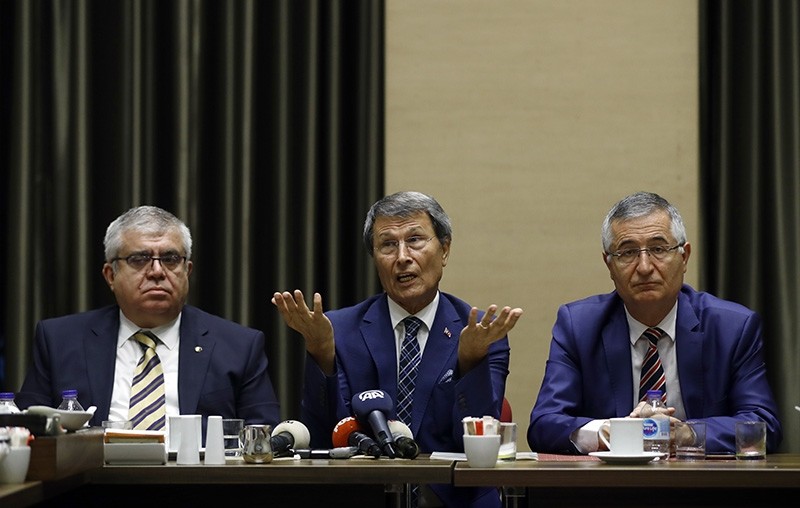 Three founding members of the right-wing Good Party (IYI Party - IP) – Yusuf Halaçoğlu, Özcan Yeniçeri and Nevzat Bor – resigned from the party Monday to protest policies of the party's administration amid leadership troubles that began after the June 24 parliamentary and presidential elections.

The members that resigned – Yusuf Halaçoğlu, Özcan Yeniçeri and Nevzat Boz – shared a statement to the press regarding their resignations holding the party administration accountable for the unsuccessful results of the June 24 elections and blamed them of "disloyalty" in preparing the deputy lists. "The party administration opted for figures who joined the party later, while founding members were pushed aside," Halaçoğlu said in a news conference, who read the statement on behalf of the resigned trio.

Halaçoğlu and Yeniçeri were former Nationalist Movement Party (MHP) deputies, while Boz was the former head of Grey Wolves, a group that constitutes the youth branch of the MHP. All three members were among a dissident faction in the MHP who left the party and founded the IP in 2017.

The resignations are expected to have a devastating effect on the party, which has been engulfed in intraparty debates since the party's poor June 24 election results. The party's chairwoman, Meral Akşener, gained 7.3 percent of the votes in the presidential elections, while the IP garnered 9.6 percent of the votes in the parliamentary elections, well below expectations. However, IP was able to send 44 deputies to Parliament thanks to the alliance formed with the main opposition Republican People's Party (CHP).

The dissatisfaction from the elections stoked tensions within the party, which resulted in a high number of resignations from the party. Failing to manage the unraveling, Akşener called for an extraordinary convention and announced her resignation following the meetings in the central province of Afyonkarahisar in late July that aimed to draw a new road map to prevent the party's dissolution.

The politicians who resigned also criticized the party's administration, particularly Akşener, for joining an alliance with the Republican People's Party (CHP), which, according to them, caused a decrease in IP's votes.

"Our votes were above 21 percent before the alliance. The alliance hindered the votes, which would have possibly swayed to our party from voters of the AK Party [Justice and Development Party]. Also, CHP voters, who tend to cast their votes for us, returned their party. Thus, our party got an unexpected result in the elections," Halaçoğlu said.

Halaçoğlu stated his regret that the party had decided to support IP Chairwoman Meral Akşener for the post in the extraordinary congress to be held Aug. 12, despite her lackluster performance in the elections. He blamed Akşener for the party's collapse, stating, "the whole fault belongs to the chairwoman herself."

Bor also claimed Akşener made the decision on her own to form the Nation Alliance with center-left CHP in the June 24 election, despite previous talks on forming the alliance with right-wing Felicity Party (SP) and Democrat Party (DP).

The party's problems began before the June 24 elections as some prominent members resigned from parliamentarian candidacy due to their uneasiness over their positions in the candidate lists. Halaçoğlu was among them, as he publicly complained about his party's failure to not nominate him. Also, the founder of the party's youth branch, Osman Ertürk Özel, who became one of IP's most public faces in the pre-election period, announced his withdrawal as his party's parliamentary nominee on his Twitter account, reportedly in reaction to his low position on the candidate lists. After the elections, scores of party members, including IP Deputy Chairperson Ayfer Yılmaz, and several provincial heads resigned from the party after expressing their discontent with the results.

After releasing the statement, the trio answered questions from journalists. Yeniçeri said opposition parties in Turkey are incompetent and do not see themselves ready for the government. "After the election, they declared victory. Did you see or hear someone who accepted defeat after the elections?" Yeniçeri said, criticizing the opposition.

Speaking on the issue, IP spokesman Aytun Çıray said they have to respect the resignations of the members; however, he rejected accusations that pointed to the party "where they expressed their opinions freely."

After the Nov. 1, 2015 elections, where the MHP barely crossed the 10 percent national election threshold and lost half its deputies compared to the June 7, 2015 elections, Akşener, the party's then-Vice Chairman Ümit Özdağ and a number of other deputies, including Halaçoğlu and Yeniçeri, called on MHP Chairman Devlet Bahçeli to step down. After they failed to unseat Bahçeli following a heated judicial process, they left the party in 2016 to form their own party.