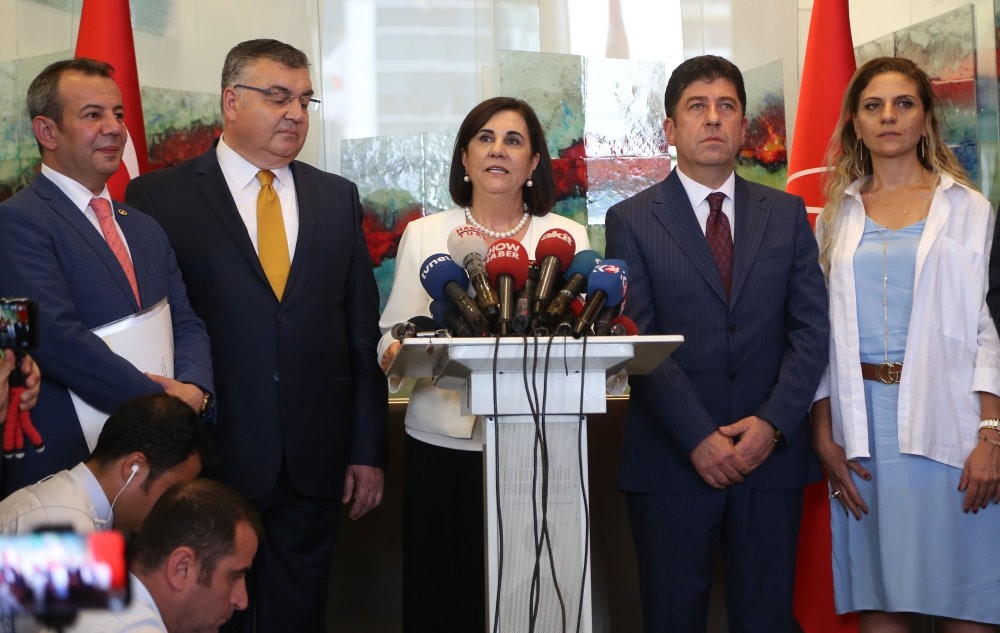 Gaye Usluer (C), a prominent dissident figure in the CHP, speaks after delivering the delegate signatures for an extraordinary convention, Aug. 3.
by Daily Sabah Aug 10, 2018 12:00 am

The main opposition Republican People's Party (CHP) is set to undergo a change in the party's top executive body, yet efforts to ease pressure from dissidents do not seem to be paying off.

Figures critical of incumbent Chairman Kemal Kılıçdaroğlu's leadership have reiterated their demand for a substantial change in the party and expected to take new steps to hold a bylaw convention.

Gaye Usluer, prominent dissident figure, said on Wednesday in a televised interview that "Changes in the Central Executive Board (MYK) is under the initiative of our chairman. It is not right to criticize it, yet, it seems that our demands did not get through to the party administration."

Commenting on the claims circulating in media that dissidents will break away from the CHP, Usluer said, "Such a thing has never come up for discussion. We are not guests but the host. We will continue to live in our home."

She underlined that contrary to party administration's claims, "Convention or amendments in the bylaws are not posing any hindrance to the preparations for the upcoming election, which is a known by us and voters as well. There is no meaning in sidetracking [the issue]."

The dissidents, who sought to hold an extraordinary convention to change the party chairman but failed to reach a quorum, are reportedly rolling up their sleeves for a new petition to amend the byla

ws to be able to implement changes with fewer signatures from delegates.

The delegates will reportedly meet in Ankara on Saturday to discuss the petition. Muharrem İnce is also expected to participate in the meeting. The process of collecting signatures to change bylaws may be launched on Monday in line with the decision to be taken in the meeting.

The CHP has been in turmoil for some time now due to internal divisions sparked by the dissidents' demands of change following the June 24 elections where İnce, who was the presidential candidate of the party, attracted more votes than the party itself.

Following the submission of dissidents' signatures calling for a convention on Aug. 2, the party administration announced Monday that dissidents failed to reach a quorum to convene. They had hoped that this would put an end to the continuing heated debates within the party.

Nevertheless, reactions have been mounting since then, while the administration has turned a deaf ear to the protests and demands of its dissidents amid preparations for changes in the party MYK.

Many organized sit-down protests, while some placed a large chair in front of the party headquarters to represent Kılıçdaroğlu, who they say is tightly clinging to his seat.

Additionally, after the statements of delegates who say they withdrew their signatures from the convention petition because they "were threatened," a new chain of protests and resignations has begun.

In relation to the issue, a CHP delegate from central Sivas province, Hüseyin Çiçek, told the Sabah newspaper yesterday that after he signed the petition, he initially received lots of telephone calls, which later took on threatening tone.