Trump likely to use Brunson case for midterm elections 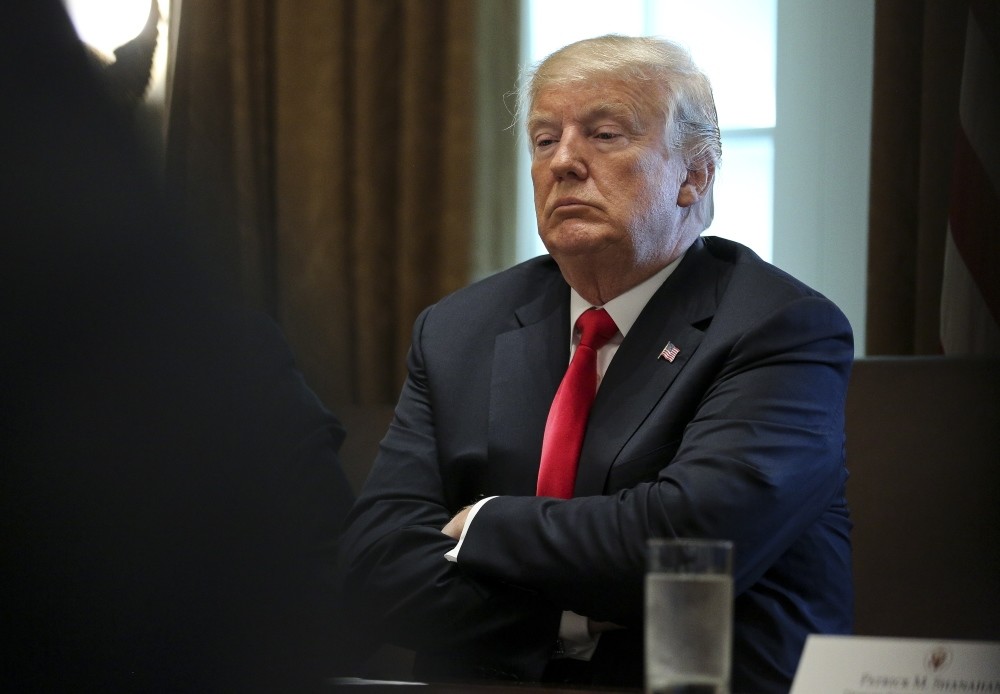 U.S. President Donald Trump listens during a Cabinet meeting in the Cabinet Room of the White House in Washington DC, Aug. 16.
by Mustafa Kırıkçıoğlu Aug 18, 2018 12:00 am

Washington shows no sign of interest and continues to propel extrajudicial release of terror-linked American pastor Andrew Brunson as precondition to recover relations with Turkey, which, can be pointed to Trump administration's desire to boost its voter base in mid-elections in November

Washington's insistence on undiplomatic preconditions, including the extrajudicial release of terror-linked American pastor Andrew Brunson, to recover bilateral relations with Turkey seeks to gain advantage for President Trump in the U.S. midterm elections scheduled for November.

Neglecting Ankara's efforts to overcome the recent crisis, Trump has again demanded the immediate release of Brunson, threatening Turkey with more sanctions if not.

"They are now holding our wonderful Christian Pastor, who I must now ask to represent our Country as a great patriot hostage," he said in a Tweet on Thursday.

During a Cabinet meeting at the White House on Thursday, Treasury Secretary Steven Mnuchin said the U.S. is ready to impose more sanctions on Turkey if it refuses the extrajudicial release of Brunson. "We put sanctions on several of the Cabinet members," Mnuchin said. "We have more that we're planning to do if they don't release him quickly."

Turkey has responded in kind to U.S. sanctions under World Trade Organization (WTO) rules and will continue to do so, Turkish Trade Minister Ruhsar Pekcan said Friday.

Turkey and the U.S. have been locked in a heated crisis emanating from sanctions imposed on Interior Minister Süleyman Soylu and Justice Minister Abdulhamit Gül for not releasing Brunson, who faces terrorism charges in Turkey. Trump also announced last week a doubling of steel and aluminum tariffs on Turkish imports.

In response to U.S. sanctions, Turkey increased tariffs on several U.S. products including alcohol, tobacco products, cosmetic products and cars, it also said it would freeze the assets of U.S. Attorney General Jeff Sessions and U.S. Secretary of the Interior Ryan Zinke.

Many pundits are claiming that recovering from the recent crisis with Turkey is not a primary goal of the Trump administration; instead it wants to wield the dispute with Turkey to rally its voter base for midterm elections.

An article published in the Financial Times on Friday said that the U.S. president's stance on the detained pastor bolsters support from core voters.

"During the 2016 election, many analysts said Mr. Trump could not win and argued that evangelicals, who make up one quarter of the U.S. population, would not support a liberal real estate mogul. He took more than 80 per cent of the evangelical vote," said the article.

"In every church in the country, people know the name Andrew Brunson," the article quoted a member of an evangelical advisory board that counsels Trump.

Ankara has been demonstrating great efforts in wanting to mend ties, which has not yet been reciprocated by Washington. Earlier this month, a nine-person Turkish delegation went to the U.S. for talks on mending ties but returned home after refusing to accept the preconditions set by the U.S., including the release of Brunson. The U.S. demands for the release of Brunson scuttled the talks, American media reported after the meeting.

An article from CNBC on Aug. 2 suggested that Trump is working hard to galvanize his voter base in order to fend off Democratic wins in the House and Senate, as the U.S. is now less than 100 days from the midterm elections. The article quoted an expert, who said, "It just shows the importance of the evangelical vote in the U.S. as it heads to midterms," referring to Trump's approach in the Brunson case.

The crisis can be overcome with a decent U.S. approach

Foreign Minister Mevlüt Çavuşoğlu said on Thursday that Turkey and the United States can easily overcome their problems but not with Washington's current approach.

Speaking at a news conference, Çavuşoğlu said Turkey has done its part in terms of preserving friendly relations with the U.S. and accused Washington of supporting terror groups targeting Turkey, providing them with "trucks loaded with weapons."

The People's Protection Units (YPG) have organic organizational and operational links with the PKK, a group considered a terrorist organization by the U.S., the EU and Turkey. Despite the links, Washington has picked the YPG as its partner in its fight against Daesh in Syria, supplying the group with weapons and other military equipment.

Trump also asserted during the cabinet meeting that he had secured the release of a Turkish citizen in another country but Turkey failed to reciprocate by releasing Brunson.

"I'd like to know — unrelated to the pastor — I just think it's a terrible thing that they're holding him. We got somebody out for him. He needed help getting somebody out of someplace; they came out. They want to hold our wonderful pastor. Not fair. Not right." Trump said.

Trump referred to his alleged request of Israeli Prime Minister Benjamin Netanyahu to release Ebru Özkan, a Turkish citizen arrested by Israel in June while she was visiting the country as a tourist. On July 8, it indicted her in a security court for allegedly aiding Palestinian group Hamas during a visit to Jerusalem, charges her lawyer denied. She was deported a week later.

Following her release, the Washington Post reported that Trump asked Netanyahu in a July 14 phone call to let Özkan go in a "trade" for Brunson. Both sides denied the allegations.

"Candid and productive meeting today with the Turkish Ambassador to the United States regarding #PastorAndrew Brunson and other issues," Graham wrote in a tweet.

The White House said the meeting focused on Brunson and took place just two days after the Turkish envoy held a meeting with National Security Adviser John Bolton at the White House. Later on his Twitter account, Kılıç also said he had very sincere and productive meeting with Senator Graham.

A court in western Turkey's İzmir rejected a third appeal for Brunson's release on Friday.

The Third High Criminal Court ruled against a new appeal for Brunson's release from house arrest and lifting his travel ban.

Earlier Wednesday, the Second High Criminal Court in İzmir rejected an appeal for Brunson's release. Brunson's lawyer, İsmail Cem Halavurt appealed the decision in a higher court. The next hearing on the case is scheduled for Oct. 12.

Brunson, a Christian pastor from North Carolina who has lived in Turkey for more than two decades, was indicted on charges of helping the Gülenist Terror Group (FETÖ), which is responsible for the failed 2016 coup, as well as supporting the PKK, and was later moved to house arrest on July 25 due to his health problems. Serving at the Diriliş (Resurrection) Protestant Church in the western province of Izmir, Brunson was arrested in October 2016.