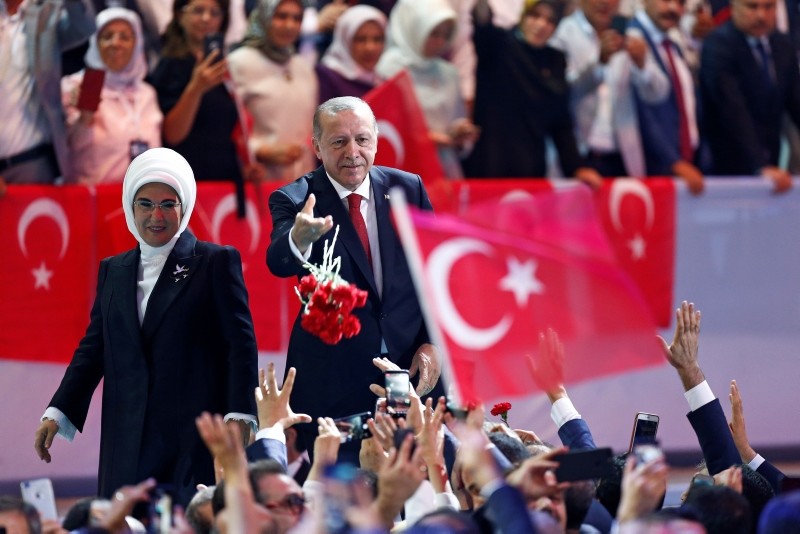 Turkey's President Recep Tayyip Erdou011fan, accompanied by his wife Emine, throws flowers to his supporters as he arrives to deliver a speech at his ruling Justice and Development Party (AK Party) convention in Ankara, Turkey, Aug. 18, 2018. (AP Photo)
by Daily Sabah with Agencies Aug 18, 2018 12:00 am

Turkey's ruling Justice and Development Party (AK Party) is holding its sixth ordinary convention Saturday in the capital, Ankara. The party will change its bylaws in accordance with Turkey's new presidential system.

The new bylaws will enable members of the presidential cabinet to take part in the Central Executive and Decision Board (MKYK), which has the power to form and dissolve the party's grassroots organizations.

A total of 1,457 delegates voted for a new MKYK of 50 party members. AK Party spokesman Mahir Ünal said previously that at least half of the MKYK's membership would change in the sixth congress.

According to the list revealed Saturday, the MKYK will have 29 new members, include 15 women. The new members include former ministers from previous AK Party cabinets, while current members of the presidential cabinet were not included in the MKYK.

Central Disciplinary Board (MDK), Intra-Party Democracy and Arbitration Board, and Political Virtue and Ethics Board members were also determined by the delegates.

The AK Party normally holds its grand convention once every three years. The last one was in September 2015. In May 2017, the AK Party held an extraordinary convention following the historic approval of a raft of constitutional changes that April. At the convention, President Recep Tayyip Erdoğan rejoined and was reelected as head of the party which he co-founded.

The convention was attended by thousands of people from across the country in and around the 10,500-seat Ankara Sports Center. 409 NGO representatives and 217 people including veterans, members of families of fallen soldiers and people with disabilities attended to the convention.

The chairman of Russia's Duma, Vyacheslav Volodin, and a representative from the Communist Party of China also followed the convention.

Saturday's event also comes on the heels of a deepening rift with the U.S., a NATO ally. Tensions between Ankara and Washington rose particularly following the arrest of American pastor Andrew Brunson. The 50-year-old clergyman, who is being tried on espionage and terrorism-related charges, was detained in October 2016 and arrested that December in the aftermath of a failed coup.

U.S. President Donald Trump doubled tariffs on Turkish steel and aluminum on Aug. 10, while also imposing sanctions on Turkish interior and justice ministers. The sanctions, topped with worries over the Turkish economy and a global scale trade and currency war, sent Turkish lira to new record lows and made it one of the worst performing currencies this year.

Turkey responded in kind to the sanctions, increasing tariffs on U.S. alcohol, tobacco and automotive products on Wednesday, also imposing the same sanctions to the U.S. interior and state secretaries. Turkish officials and financial sector executives described the U.S. moves as an "economic war", adding that the volatility in lira does not reflect the state of the country's economy.

Speaking at the convention, Erdoğan criticized the U.S. and Trump without specifying, saying: "We have not surrendered and will not surrender to those who pretend to be our strategic partners while making us their strategic targets."

"Some are threatening us with economy, sanctions, exchange rates, interests and inflation. We see your game and we challenge it."

Erdoğan also vowed to end terror threats, particularly from the PKK terrorist group, in their source.

"We will continue cross border operations by expanding them. ... We are determined at all costs to drain the threats against our country, particularly from Syria and Iraq, in their source," he said.

On June 24 this year, Erdoğan won an absolute majority in the presidential election with 52.6 percent of the vote, besting his closest rival, Muharrem Ince, who got 30.6 percent, according to Turkey's Supreme Election Council (YSK).

After its establishment in 2001, the AK Party won the November 2002 election with two-thirds of the seats in parliament. It became the first party to win an outright majority in over a decade.

During his time as prime minister, Erdoğan oversaw general elections in 2007 and 2011, both times returning the AK Party to power with a greater share of the vote.