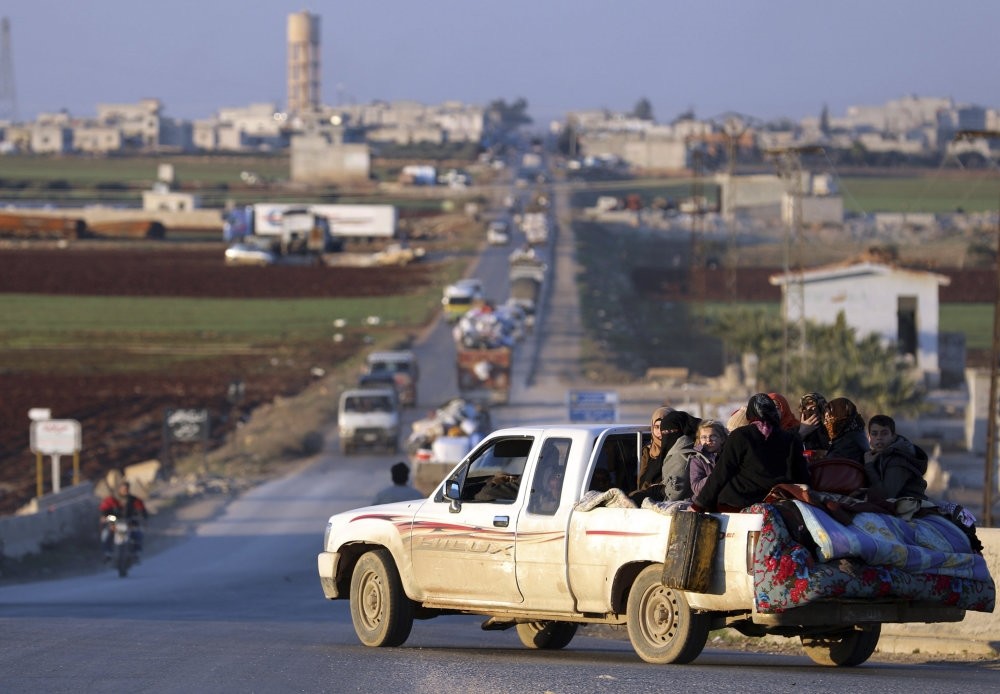 Displaced Syrians who fled the fighting in Idlib's southeastern town of Sinjar drive on a road in a rebel-held area near the city of Saraqib, Jan. 7.
by Daily Sabah Aug 30, 2018 12:00 am

As Russia continues its buildup off the coast of Syria and the Assad regime deploys more troops around the Idlib region, international officials fear an exodus involving millions of Syrians toward Europe will recommence if the regime pushes to occupy the last opposition-held region

Local and international officials have issued warnings over a potential humanitarian nightmare and a new refugee flood toward Europe if the regime and Russian military buildup around Idlib translates into a new offensive to conquer the last tangible opposition concentration in the country. U.N. Secretary-General Antonio Guterres warned late Tuesday that a possible offensive would have catastrophic consequences for civilians already suffering due to the seven-year civil war. The U.N. Humanitarian Coordination Office in Damascus also said yesterday that as many as 800,000 people already in a dire humanitarian situation would be displaced in case of the offensive.

Previously, the U.N. had warned that the number could rise up to 2 million if the surrounding region is included.

"We fear that - should there be an increased escalation of hostilities in that area - up to 800,000 people could be displaced and that the number of people who are in need of humanitarian assistance, which is already high, could increase dramatically," said Linda Tom.

Idlib and the surrounding region have a population of approximately 3.5 million, and substantial part of it consists of refugees who fled different parts of the country.

Earlier in June, the United Nations said that in case of a regime offensive, the only route out for those people would be through Turkey, which already hosts more than 3 million Syrian refugees. Most of the Syrian refugees have used Turkey as gateway to reach European countries, particularly Germany. Ankara, for now, prevents refugees who are intent on passing to Europe as part of a deal signed with the EU in March 2016 but has been criticizing the lack of European support and an additional million euros or more may force it to reconsider the deal. The U.N. director of humanitarian operations John Ging warned Tuesday that an offensive on İdlib "has the potential to create a humanitarian emergency at a scale not yet seen." He also called on members of the U.N. Security Council "to do all they can to ensure that we avoid this."

So far, around 6 million people have been displaced internally and another 5 million were driven abroad as refugees since the beginning of the Syrian civil war, according to United Nations figures.

The civil war erupted in 2011 when the Assad regime harshly responded to protesters who had poured into the streets to demand more rights and freedom. The protests initially emerged following the Arab Spring demonstrations that resulted in strongmen in Egypt, Tunisia and Libya stepping down. The cruelty against protesters triggered into a rebellion in significant parts of the country, turning into a brutal civil war. So far an estimated 500,000 people have been killed in the war.

ALL PARTIES INCREASING DEPLOYMENT AROUND IDLIB

The Russian Navy has dispatched the biggest task force to the Mediterranean Sea since the start of Russia's intervention in the Syrian conflict in September 2015, Russian daily Izvestia reported earlier this week.

The task force includes 10 ships and two submarines and most of the ships carry "Kalibr" cruise missiles. Several more ships are on their way to join the task force.

The Britain-based Syrian Observatory for Human Rights said the Turkish reinforcements, including trucks carrying construction materials and concrete walls, have arrived in parts of Idlib and Hama provinces.

In an effort to restore calm in the region and improve the humanitarian situation, the three guarantor states Turkey, Iran and

Russia launched the Astana process on Jan. 23, 2017, to complement the U.N.-brokered talks in Geneva.

Within this framework, Turkey, Iran and Russia agreed to establish de-escalation zones in Idlib and parts of neighboring Latakia, Hama and Aleppo.

Under the Astana agreement, Turkey gradually established 12 observation points from Idlib's north to south to monitor and sustain the current cease-fire agreement for the de-escalation zones, deliver humanitarian aid and ensure the secure return of displaced people.

Ankara has long been warning that a military operation in Idlib would be a disaster.

On the other side, the Assad regime is citing the existence of the militant group Hayat Tahrir al-Sham (HTS) in Idlib to justify a possible military offensive. Along with Iranian-backed paramilitary groups on the ground, regime forces strengthened their positions around the province with batches of new deployments from other parts of the country.

Local reports have suggested that Turkish units continue to negotiate with HTS and other affiliated groups to convince them to dissolve and possibly leave the region.

"They also caused difficulties for Turkey while it was establishing observation points. It is important for all of us to neutralize radical terrorist gr

oups. In order for a political solution, a constitution is a must," he said recently in a joint press conference with his Russian counterpart Sergei Lavrov in Moscow.The RIA news agency cited Russian Deputy Foreign Minister Mikhail Bogdanov as saying yesterday that Russia is discussing the situation in the Idlib and Afrin region with Iran and Turkey as well as the Assad regime and opposition groups.

The U.S. on Tuesday also warned Russia and the Syrian regime against any potential offensive on Idlib. "We would hold them responsible and we would hold them accountable for that, most especially for the use of chemical weapons," U.S. State Department spokeswoman Heather Nauert said Tuesday.

"We would encourage Russia to make this point very clear to Damascus, that will not be tolerated," she added.

The U.S. involvement in the Syrian civil war is currently limited to supporting the Syrian wing of the terrorist PKK, which occupies the northeast of the country and is reportedly in negotiations with the regime.

The U.S. denies the Syrian Democratic Forces (SDF), of which militants of the People's Protection Units (YPG) - the PKK's Syrian wing - form the majority, is a terrorist group. The U.S has been supporting the group with weapons and supplies and has recently been installing radar systems in regions under the YPG's control.