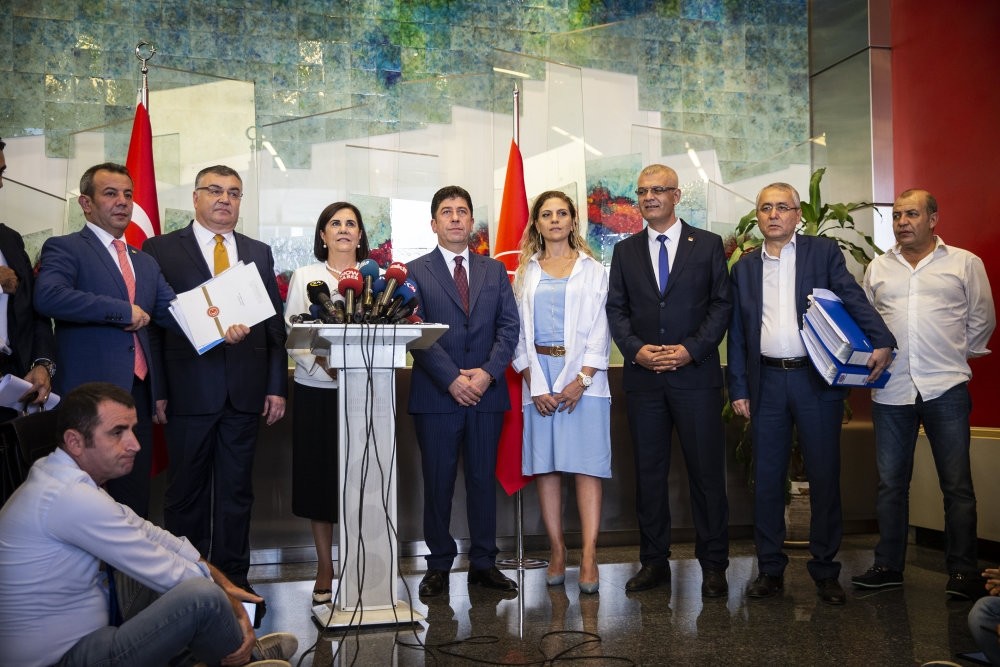 CHP dissidents during a press conference in August. They called on party leader Ku0131lu0131u00e7darou011flu to resign but failed to reach the quorum for the extraordinary congress.
by Daily Sabah Sep 01, 2018 12:00 am

The CHP dissidents who demanded an extraordinary convention after poor results in the June 24 elections failed to consolidate their vision, after a prominent leader of the faction admitted that she supported the incumbent chairman in recent conventions

Despite constant demands for change in the main opposition Republican People's Party (CHP), dissenting voices have been unable to consolidate as revealed in remarks of party assembly member Gaye Usluer, a prominent member of the dissenting faction.

"I am not in Muharrem İnce's core team. I voted for [incumbent chairman] Kemal Kılıçdaroğlu in the last four conventions" Usluer said on Friday in a televised program on Habertürk, deepening divergences in the dissident faction.

Usluer added that the CHP is their home and that they are not considering founding a new party by reiterating her demand for change. Commenting on the latest party assembly meeting on Aug. 29 that convened to evaluate the results of the June 24 presidential elections, Usluer said that it was a late move but a necessary move.

The CHP has been in turmoil for some time now due to internal divisions sparked by the dissidents' demands for change following the June 24 elections where İnce, the presidential candidate of the party, attracted more votes than the party itself. Usluer was the spokesperson of the dissent faction that had demanded an extraordinary congress after the election.

Dissidents blamed incumbent party leader Kılıçdaroğlu, who has led the party since 2011, for nine failures in previous elections and wanted him to step down. Following the election, dissidents started a petition to convene an extraordinary convention calling for a change in the administration on July 16. Yet, the dissidents failed to reach the quorum. Since then, dissidents have unceasingly protested the administration.

Most recently, dissidents announced that they would collect signatures to call for a bylaw change if the administration insists on not holding an extraordinary convention until Eid Bayram. However, no concrete step has been taken by dissidents in the first week after Bayram. On the country, the demands of dissidents seem to be fading due to their concerns about being nominated as candidates in the upcoming March 2019 elections by the administration.

Consolidation of the dissidents against the administration was again complicated by the emergence of new dissenting voices in the party in addition to Ince and his supporters. The Us for the Future group had previously announced their support for a change and extraordinary convention. Whereas, the Left-Wing faction declared that they are preparing a notice for the founding anniversary of the party. Reportedly, the Third Way group was established by former CHP General Secretary Önder Sav and his supporters.