Turkey to help remove FETÖ from being a threat to Kyrgyzstan, Erdoğan says 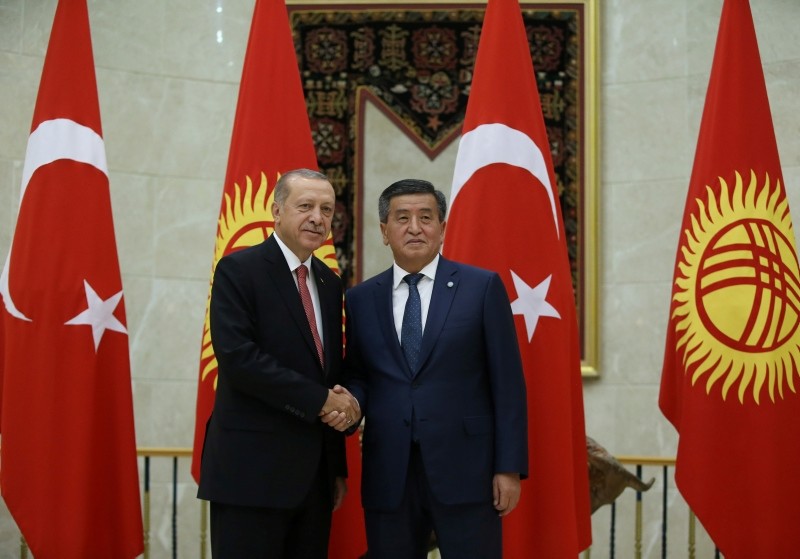 President Recep Tayyip Erdoğan said Saturday that Turkey would help remove the Gülenist Terror Organization (FETÖ) from being a threat to Kyrgyzstan.

Speaking at a joint press conference with his Kyrgyz counterpart Sooronbay Jeenbekov in Bishkek, Erdoğan said that the fight against FETÖ was one of the main topics discussed during their meeting.

"We don't want Kyrgyzstan to experience the troubles we had on July 15 [2016] coup attempt," the president said.

"We discussed which joint measures could be taken in the fight against FETÖ," he said, adding that Turkey would always support Kyrgyzstan with its experience in this matter.

The president also underlined that there are many important steps to be taken, especially in the areas of strategy, military, policy and economy.

Jeenbekov said the incidents of July 15, 2016 were "a test" not only for Turkish people but also for the Kyrgyz people.

"You know Kyrgyzstan was among the countries supporting Turkey [over the coup attempt]. The only power of the government is the people. It is not acceptable to overthrow a democratically elected government using military power," Jeenbekov said, adding that his country would always be open for cooperation on FETÖ issues.

The Kyrgyz president said they changed FETÖ-linked schools were now under the jurisdiction of the country's National Education Ministry.

Turkey accuses FETÖ of orchestrating the July 15, 2016, coup attempt that killed over 250 civilians.

It has long demanded the extradition of FETÖ leader Fetullah Gülen, who has been in a self-imposed exile in Pennsylvania, U.S., since 1999.

The two leaders also discussed economic issues like increasing the trade volume between the two countries.

Erdoğan said that they targeted an annual trade volume of $1 billion, calling upon Turkish business people to make investments in Kyrgyzstan.

"Turkey and Kyrgyzstan are two brother countries. Turkey has always taken side with Kyrgyzstan since its independence and has always supported the development of Kyrgyzstan," he said.

Erdoğan recalled that the creation of the High-Level Strategic Cooperation Council in 2011 had boosted relations between the two countries to a strategic partnership level.

The president also said that Turkey would support Kyrgyzstan in the non-permanent membership election at the United Nations Security Council, adding: "We also welcome the establishment of a Kyrgyz-Turk friendship group in the Kyrgyz parliament."

Erdoğan said a "Kyrgyz Friendship Group" would be created as soon as possible, adding that Turkey would also promote frequent meetings between Turkish and Kyrgyz lawmakers.

Speaking later at a news conference with his Kyrgyz counterpart following the High Level Strategic Cooperation Council meeting, Erdoğan said: "I am also pleased to attend an opening ceremony of the World Nomad Games 2018 on Sunday."

"We are planning to host the fourth World Nomad Games to be held in 2020, which makes a great contribution to our common cultural and historical values," he added.

The first World Nomad Games were held in 2014 and featured 350 participants from 18 countries. Events included traditional sports like wrestling, hunting with eagles and equestrian events.

Jeenbekov highlighted the importance of the friendship and deep-rooted Kyrgyz-Turkish ties.

"We never forget that Turkey was the first country recognizing the independence of Kyrgyzstan.

"You are first the president I have received," Jeenbekov said, referring to Erdoğan.

"Your visit will certainly boost Kyrgyz-Turkish ties. A strategic partnership between Kyrgyzstan and Turkey meets the interests of the two countries," Jeenbekov said.