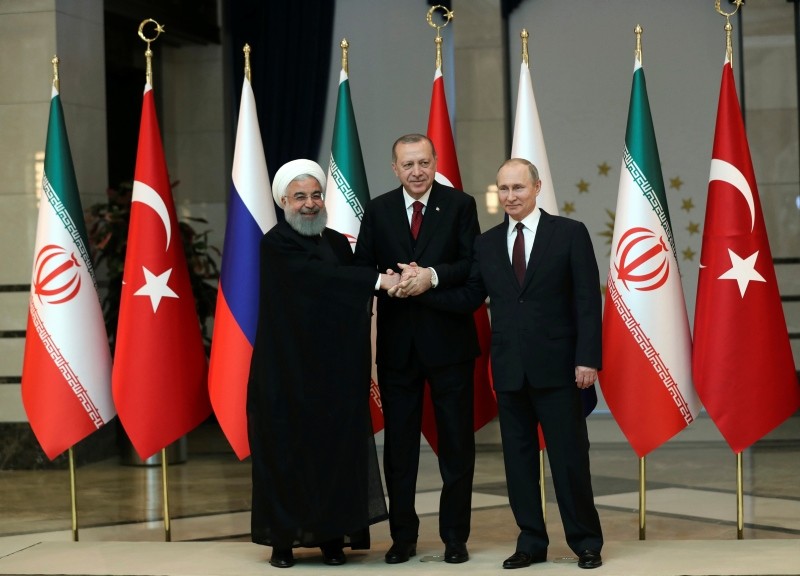 The presidents of Turkey, Iran and Russia have discussed the situation in Syria as a bloody offensive on Idlib province looms, despite warnings from the U.S. and others not to launch the attack.

The leaders each held bilateral talks before the meeting began in Tehran. As photographers took pictures of the three leaders Rouhani, smiling, reached for both of their hands.

Rouhani said later in a joint press conference ahead of the summit that the fight in Syria should continue until all terrorists are "uprooted," especially in Idlib. The Iranian president also said that America's intervention in Syria should immediately end, adding that that "the fires of war and bloodshed in Syria are reaching their end."

Russian President Putin, on the other hand, said that a political solution to Syria is being promoted through successfully implementing agreements, adding that a U.N.-monitored constitutional committee to be established on Syria

Putin underlined that Russia, Iran and Turkey should improve coordination in Syria, but added that the Assad regime has a right to retake "all its territory."

Meanwhile, President Erdoğan appealed for a "reasonable way out" that avoids a bloodbath in Syria's Idlib.

"Idlib is not only about the future of Syria, it is also about the peace of the whole region," Erdoğan said. "Any attack launched or to be launched on Idlib will result in a disaster, massacre and a very big humanitarian tragedy."

The president also said that millions of people would be moving towards the Turkish border in case of an attack, adding that the country's capacity for sheltering refugees has already been reached.

Erdoğan stressed that a cease-fire decision would be a victory for the summit, adding that Turkey would never leave Idlib to the mercy of Syria's Assad regime.

"We are extremely annoyed by the U.S. supporting a terrorist organization [YPG/PYD/SDF] in Syria, the U.S. is trying to make these terrorists' presence in the east of Euphrates permanent," Erdoğan commented on the ongoing U.S.actions in the region.

Eight leading aid agencies also warned Friday that "once again, it will be the most vulnerable who will pay the heaviest price." They appealed to world leaders to "urgently work together to avoid this horrific scenario."

Later Friday, the U.N. Security Council was also due to meet, at Washington's request, to discuss Idlib.