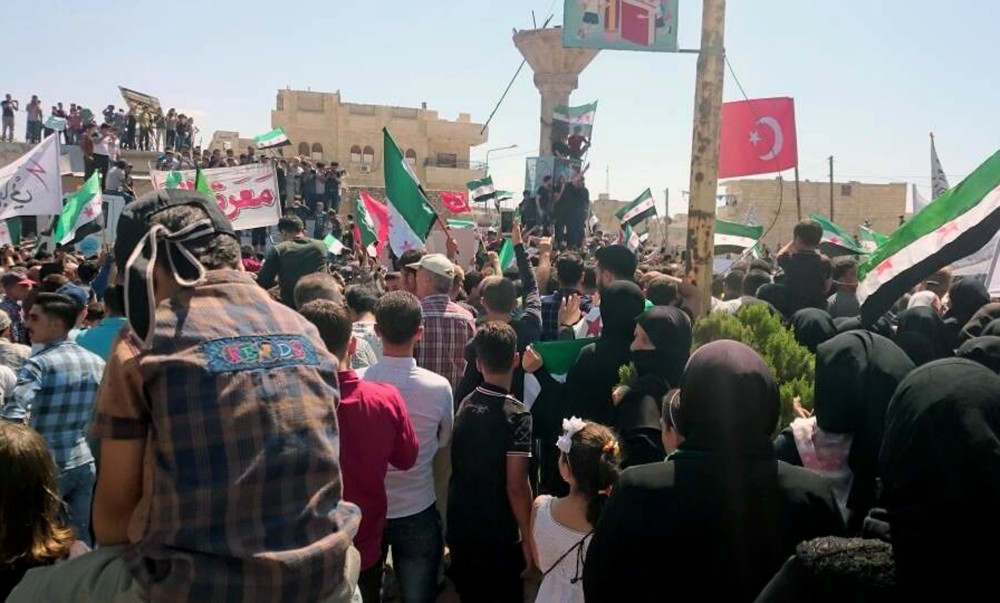 This image courtesy of Wissam Zarqa, a resident of Idlib, shows protesters holding Turkish flags and the flags of the Syrian revolution u0130Qin Idlib province, Syria, Friday.
by Mustafa Kırıkçıoğlu Sep 08, 2018 12:00 am

The volatile situation in northwestern Syria's Idlib, the last stronghold of opposition forces in the seven-year-old civil war, has been closely monitored by the world.

While some countries have a solid military presence in the region, many international actors who are not directly involved in the conflict are also pursuing their strategic interests. International organizations and human right groups are also monitoring the process amid fears of a new humanitarian crisis.

Local sources started to report on Russian airstrikes earlier this week and it sporadically continued. Even though there is still no precision on the Bashar Assad regime's military offensive to the province, the knife-edge situation increases fears of triggering a large-scale confrontation.

The Russian military already has a substantial presence in bases near the Mediterranean but it recently built up its navy by dispatching the biggest task force to the Mediterranean Sea last month. Also, Iranian-backed paramilitary groups, who are positioned in an observation post near Aleppo, are reportedly prepared for the possible offensive.

The Bashar Assad regime scaled up its military presence, strengthened its forces with new reinforcements from different parts of the country. In recent weeks, Turkey, which has 12 observation posts around the province according to the de-escalation agreement, also sent new military convoys carrying tanks and military vehicles.

Albeit they differentiate on its scale, a military offensive is being pushed as the only solution in Idlib for Russia, Iran and the Assad regime, since "terrorists" have to be eliminated in order to provide security and stability, according to them.

For Turkey, the U.S., EU and international organizations, it can only open the door for a worsened humanitarian situation, new refugee waves and the end of the possibility of a political solution.

Turkey already hosts more than 3 million Syrian refugees and has spent approximately $30 billion for the displaced people since the beginning of the civil war. Considering that Idlib and the surrounding region have a population of approximately 3.5 million, the extent of a new refugee wave spooks Ankara.

Also, a substantial part of Idlib's population consists of displaced people who fled different parts of the country, and likely will move toward western countries through Turkey in case of an offensive. Ankara brought the EU into its folds on this issue since the possibility of new refugee crisis also creates great fear among countries of the bloc.

While Germany said it acknowledge Turkey's concerns on humanitarian catastrophe, France stated that it opposes Idlib offensive and vows for retaliation in case of a chemical attack, along with Washington. The U.N. recently issued several warnings drawing attention of a possibly dire situation for civilians in case of the new assault.

The Ankara government also thinks that an Idlib offensive would mean end of efforts for a political solution between regime and opposition, which it sees as the only sensible way to find a permanent solution to the war. The offensive would also threaten security and stability in northern Syrian territories, which were cleared of Daesh and PKK-affiliate terrorists with Operation Euphrates Shield and Operation Olive Branch in the last two years.

Since the liberation, Ankara has attached great significance for reconstruction efforts in the area in order to return to normal life, and thus, provide a convenient environment for refugees to return to their country.

Ankara also doesn't want to see a new PKK threat near its borders as a regime-held Idlib would possibly turn into an area that the militants of the PKK's Syrian affiliate - the People's Protection Units (YPG) - could roam easily.

With the support of Russia and Iran, the Assad regime recently recovered most of opposition-held territories and now controls the majority of Syria. Now, the regime military have amassed troops near Idlib and northern Hama in preparation for a final offensive.

According to the local sources, the deployment has been intensified at the Abu ad-Duhur Air Base in southeastern Idlib and Suqaylabiyah in northern Hama.

Idlib has significance for Assad as it borders Latakia province, the main stronghold of the regime. Latakia is also strategically crucial for Russia since the province is home to the biggest Russian air base, Khmeimim, in the country.

In late December, both the Khmeimim air base and Russia's naval base in Tartus were attacked by drones. Russian media reported that many aircraft were destroyed in the attack, in which the Russian government blamed opposition forces in Idlib.

Therefore, ejecting militants of Hayat Tahrir al-Sham (HTS) alliance from Idlib remains a prominent issue for Moscow. Local reports had suggested that Turkish units show efforts to dissolve the HTS and other affiliated groups to convince them to dissolve and possibly leave the region.

For Tehran, the staunchest backer of the Syrian regime from the beginning of the civil war, supporting Bashar Assad to regain control over Idlib can solidify its position in Syria, which has been threatened by the Israel and the U.S.

Capturing the province would be big step for the Assad regime to establish authority over the entire country and thus denote success for Tehran's extensive and very costly effort to keep Assad in power and protect regional interests.

Idlib is the divided into two areas of influence between opposition groups and Hayat Tahrir al-Sham (HTS).

Sham Legion, which is also known as Faylaq al-Sham, is one of prominent groups in the alliance. It was also formed as a coalition of 19 different opposition groups and fight against regime forces in Aleppo, Idlib, Hama, Homs and Latakia. It took part in Operation Olive Branch in January, Turkey's military operation in Afrin in northern Syria.

Jaysh al-Nasr is another major group in the alliance. It was a military faction founded in August 2015 as a joint operations room of 16 member groups. In August, the Syrian Liberation Front, a Syrian opposition group formed as a merger of Ahrar al-Sham and the Nour al-Din al-Zenki Movement, joined the National Front for Liberation.

Ahrar al-Sham was formed in 2013 with 10,000 to 20,000 fighters, which, at the time, made it the second largest group fighting against Assad regime, after the Free Syrian Army (FSA).

The Nour al-Din al-Zenki Movement was formed in 2011, at the beginning of the Syrian civil war, and was one of the most influential factions in northern Aleppo province, before it fell to the Assad regime in 2016.

With the participation of the Syrian Liberation Front, the National Front for Liberation now has an estimated 70,000 fighters.

However, the coalition does not include Idlib's other dominant force, the HTS, which is seen as a terrorist group by the U.S., Russia and Turkey, as well as many other countries.

The HTS, a successor of the al-Qaida-linked Nusra Front, has long been controlling parts of the province, especially its northwest. Despite reports suggesting some disengagement within the group, it still has influence and military power. The leader of the group is Abu Mohammad al-Julani and it has 10,000 to 20,000 militants. The existence of the HTS in Idlib has been cited as justification for the possible military offensive by the Assad regime.