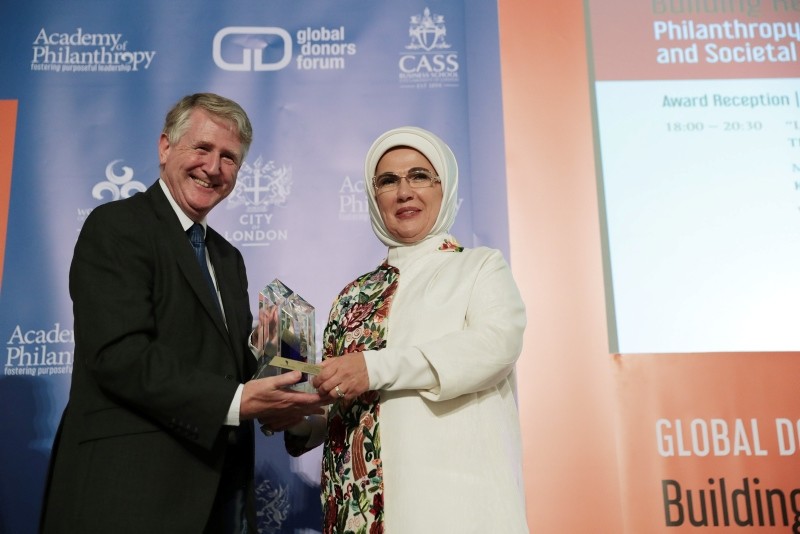 Receiving the award at a reception at Mansion House in London, Erdoğan is the only first lady to date to receive the prestigious award.

She highlighted that Turkey spends more on humanitarian aid than any other country in proportion to its national income. She said that she was receiving the award on behalf of the people of Turkey.

"If there is a tragedy somewhere in the world, we are affected by that. We are trying to be the voice of compassion in a capitalist world that made the human soul insensitive. The world needs these efforts very much, especially at time like this," Erdoğan said in her speech.

She said that the humanitarian suffering in Myanmar is one of the biggest disgraces of our century. "I will never forget what I've seen there," she added.

The theme of this year's event is "Philanthropy's Response to Inequality and Societal Tensions."

Representatives of charities, nongovernmental organizations, corporations and investors will come together at the three-day event to focus on the charity work in the Muslim world and how it can be used effectively on a global scale to overcome inequality.

The participants in the forum are expected to discuss various topics, including the connections between deprivation and radicalization, whether or not philanthropy can prevent extremism, how philanthropy and the media could work better together and the role of blockchain in improving the effectiveness of contemporary philanthropy.

Erdoğan first went to Myanmar in 2012, despite threats to her life, and drew international attention to the persecution of Rohingya. She pioneered aid campaigns for the Muslim minority people. 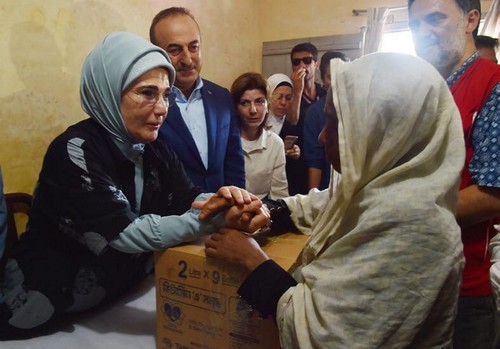 They handed out humanitarian aid to the refugees at a camp in Cox's Bazar near the Myanmar border.

She also wrote an article for CNN International on the Rohingya issue on Sept. 19 last year under the title, "The world cannot ignore the plight of Rohingya Muslims," highlighting the issue before the international audience.

Emine Erdoğan has also done a great deal of philanthropic work in Turkey, in fields such as education and health, and has also made efforts for the disabled community. She has also taken several initiatives for refugees.

The Global Donors Forum defines itself as "the biennial convening of the World Congress of Muslim Philanthropists."

"It [the Global Donors Forum] mobilizes financial and intellectual resources to create socioeconomic value beyond racial, religious and political divides," a statement on the forum's website read.

The first forum was organized in Istanbul in 2008. The forums that followed took place in Abu Dhabi, Doha, Dubai, Kuala Lumpur, Washington, D.C. and Istanbul, respectively.