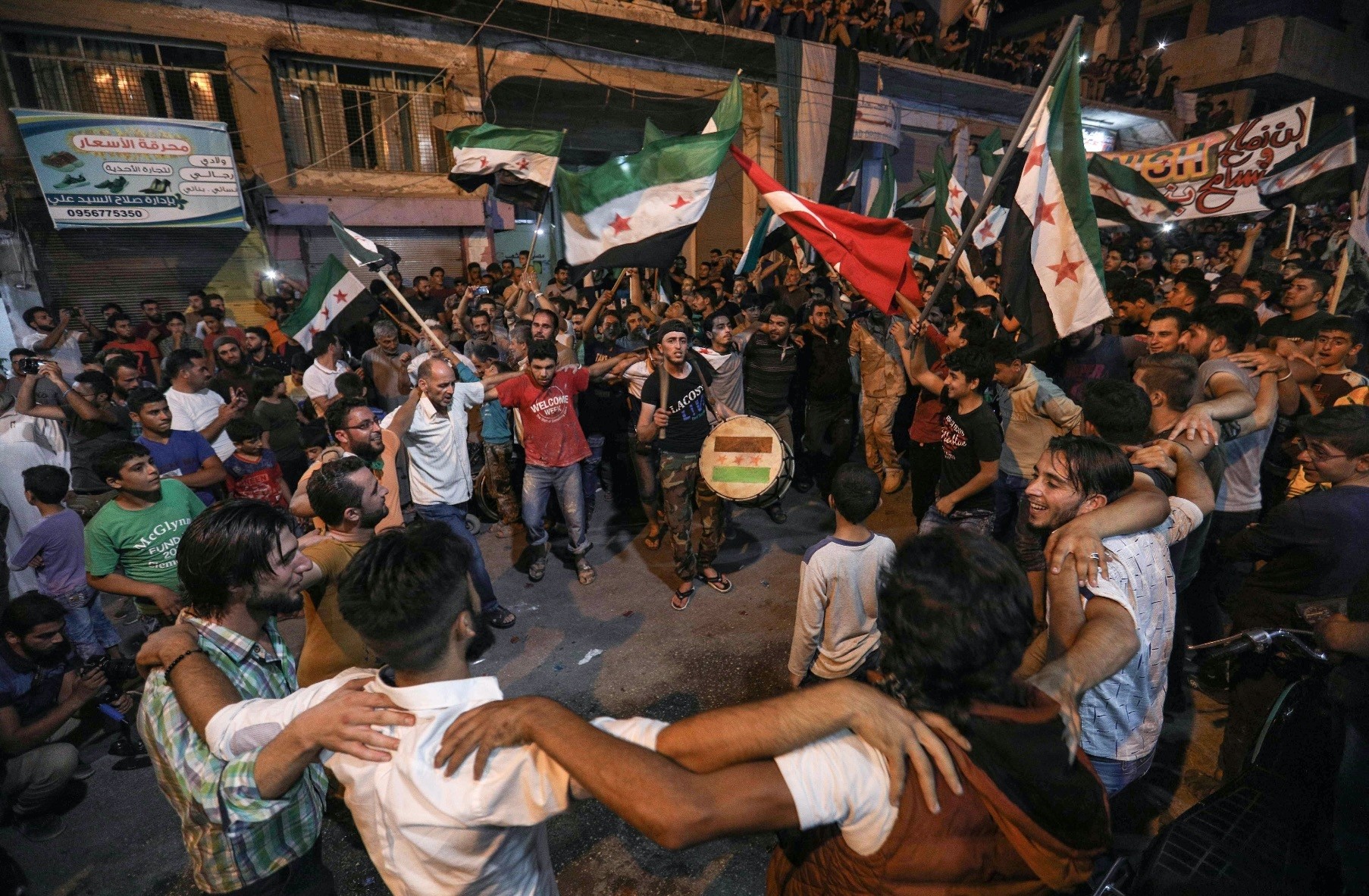 Syrians dance, chant slogans and strike drums while others wave Syrian opposition and Turkish flags during a demonstration in Binnish in northern Idlib province, Sept. 17
by Daily Sabah Sep 20, 2018 12:00 am

Civilians in Syria's northwestern Idlib province breathed a sigh of relief following the deal reached between Turkey and Russia on Monday, which promises to provide security in the region while eliminating the threat of a Syrian regime offensive

The recent agreement signed between Turkey and Russia on Monday, which foresees preserving the de-escalation zone in Syria's northwestern province of Idlib, has been praised internationally and has also been embraced by locals as it has lessened their concerns of a possible humanitarian disaster.

Ankara has been long involved in diplomatic talks with Russia and Iran with the aims of averting a Syrian regime attack in Idlib and the possible crisis that would have occurred with it.

The civilians, whose voices were hardly heard during the process, have laid their trust in Turkey's diplomatic efforts which recently yielded results.

"We trust Turkey; we feel comfortable when Turkey is strong and active in the region. We wave the Free Syrian Army (FSA) and Turkish flags at our demonstrations," Ahmad Zarzur, a resident of Idlib told Anadolu Agency (AA).

"We see this agreement as a good thing for us. We hope it will bring good results for the people of Idlib," Zarzur said.

According to the agreement, civilians and the moderate opposition will continue to remain in the region. However, all terrorist groups will be cleared from the region, while laying down their arms at the same time.

Thanks to Turkey's efforts, civilians and the opposition have won a respite finally. Yet, the agreement still needs to be implemented to pave the way for a permanent solution in Idlib. According to the agreement, the task of persuading opposition groups to lay down arms is with Turkey.

Abdussalem Hassan, the manager of a hospital in Idlib, underlined that the agreement between Russia and Turkey has had positive reflections on the region.

"We want Turkey to provide confidence to the region. We also call for the help of aid organizations," Hassan said.

According to a report by the Guardian on Tuesday, Mahmoud Abbi, a spokesperson for Free Idlib Police, an opposition-backed local police force said, "Civilians in Idlib think this is a good deal, they feel hopeful and happy concerning it."

He added that they are grateful for Turkey's efforts to prevent the Russian and Assad attack on Idlib. "However," he indicated, "we do not trust Russia about the deal. But for now it is better than displacement or bombing."

Meanwhile, Turkey has long been increasing efforts via humanitarian organizations in order to alleviate the suffering of civilians taking all necessary measures at the border and beyond for a possible movement of people. The Turkish Red Crescent (Kızılay) and Disaster and Emergency Management Presidency (AFAD) have ramped up their efforts to meet the need of people in the region.

The Syrian Observatory for Human Rights said yesterday that following the announcement of the agreement in Sochi, thousands of Idlib residents headed home.

"Around 7,000 people have returned to their towns and villages since the announcement of the deal on Monday, especially in the southeast of Idlib and the north of (neighboring) Hama," said Observatory head Rami Abdul Rahman.

Turkey's insistence on diplomacy in Idlib has been internationally recognized and praised for providing a road map to resolve the conflict. Commenting on the agreement, the U.N.'s humanitarian coordinator for the Syria crisis Panos Moumtzis said yesterday it is "very important" to avoid military escalation, protect civilians, respect freedoms, and make sure humanitarian work and access is allowed in Syria.

"The Sochi agreement is extremely important and definitely a step in the right direction," he added.

In terms of the period ahead, Mitat Çelikpala, an academic at Kadir Has University told AA that the agreement in Sochi shows President Erdoğan's call for cease-fire has been taken into consideration. "This agreement will strengthen Turkey's hand in meetings at Geneva as well as at other international meetings," he expressed.

Stating that a main factor that could prompt a new refugee wave would be Russian airstrikes, Çelikpala said "this agreement means that Russia promises that it will not take such action. Therefore, in the short-term civilian slaughter has been prevented. I do not foresee that the regime would launch an assault without Russia." He also said that there might be various provocations within and out of Idlib.