Opposition must be part of political solution in Syria's Idlib, President Erdoğan says 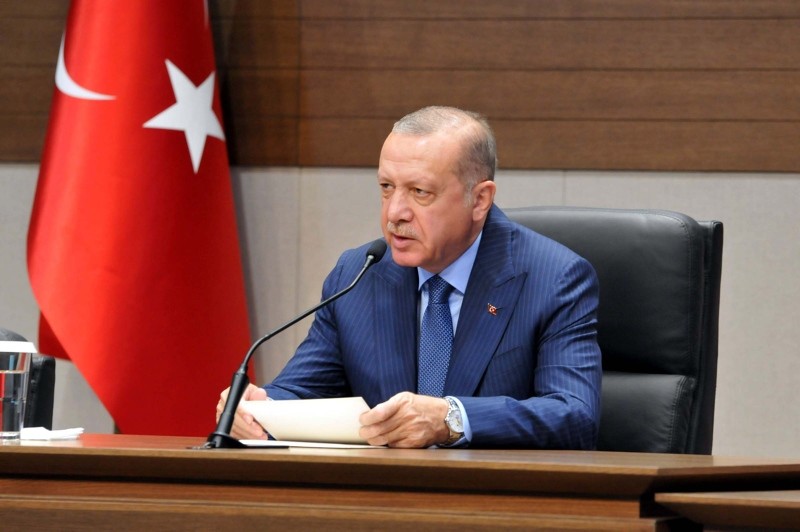 In an article penned for the Russian newspaper Kommersant on Sunday, President Recep Tayyip Erdoğan said the moderate opposition in Syria's Idlib should remain in the political process.

Emphasizing that radical groups will be cleared from the region according to their deal reached with Russia, Erdoğan stated that the presence of the moderate opposition in negotiations was necessary for the continuing of the Astana and Geneva process in a healthy way.

In relation to the diplomatic talks between Turkey, Russia and Iran, Erdoğan stated that the Astana process has laid a significant basis for efforts to provide a resolution to the eight-year-long crisis.

The three countries have been also exerting efforts to accelerate the process for a political resolution. They have been working together with the U.N. to establish a constitutional committee.

Erdoğan also underscored in the article that Turkey had exerted all efforts to avoid a deepening of the crisis in Syria, which has been observed by the whole world. He added that Turkey shouldered great responsibility during the process. Even though there have been some differences in opinion, Erdoğan stated that the sides focused on mutual understandings and the cooperation between them will continue.

Stressing the role of Turkey in meeting the needs of Syrian refugees, Erdoğan said, as a neighboring country, Turkey opened its doors to 3.5 million refugees fleeing from the Assad regime.

In relation to the last week's agreement at Sochi between Russia and Turkey in preventing a humanitarian crisis, Erdoğan stated that "opposition forces will stay in their areas and radical groups determined by both countries will not be allowed to operate in the region."

Accordingly, all heavy weapons are to be withdrawn from a demilitarized zone, which will be a 15-20 kilometers wide zone, by Oct. 10. This includes the tanks, rocket launchers, guns and mortars of all opposition groups.

The international community has voiced strong support for the agreement on the grounds that it avoided a humanitarian disaster.

Erdoğan stated in the article that Turkey would not allow the presence of terror groups along its border with Syria and he expects Moscow to support them in the fight against terrorism.

"Turkey has proven its resolution many times before in Afrin, Jarablus, al-Bab and Idlib," he stressed.

Erdoğan underscored that Turkey, which has been fighting against terrorists for 40 years, will never make concessions to terrorist organizations and will continue following this policy.

He stated that areas under the control of the terrorist organization, the People's Protection Units (YPG) and its political entity the Democratic Union Party (PYD) should be cleared.

"We expect Russia to support Turkey in its efforts against terror groups, particularly the PKK, PYD and YPG," Erdoğan stressed.

"Unfortunately, we see that the U.S.' enormous support to the YPG and PYD has been continuing," Erdoğan said and added that, "Such steps that would harm regional balances and peace among the region's people should be avoided."

The U.S.' support to the YPG/PYD has opened wounds in bilateral ties that have yet to heal. Ankara has long voiced its concerns about the threats that might be posed by these terrorist groups just beyond its borders. Despite, Ankara's warnings, the U.S. has not ended its partnership with the YPG on the grounds that the terrorist group is "essential in the fight against Daesh," risking the future of its relations with its NATO ally.

Touching on the bilateral ties with Russia, Erdoğan said Turkey has been taking steps to improve humanitarian and cultural ties as well as joint energy projects and mutual investments.

"I believe Turkish and Russian people should be in a deep, sincere and close relationship. I want to emphasize that we will always support efforts to this end," he added.